The Invention of the Camera

Like many important technologies, the cameras we use today are the result of a long, iterative process many great minds contributed to. The earliest precursor of camera technology began to appear in the fifth century B.C. – the camera obscura. This “dark chamber” consisted of an enclosed box with a small opening through which sunlight passed, projecting temporary images of the outside world onto a nearby wall.

Of course, Aristotle and others who knew of the camera obscura didn’t use it to take pictures. The actual mechanism of the camera obscura was lost to history until the 11th century, when astronomers started to use similar devices to protect their vision while observing the sun. It would still be many years before the technology matured. 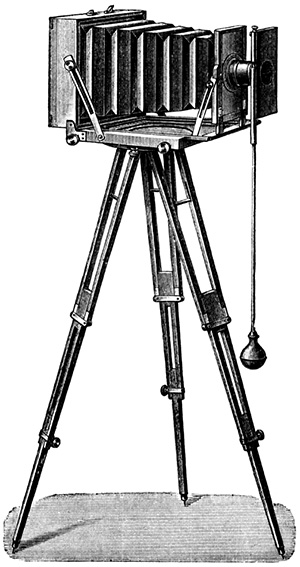 Although it took time, it was the ancient camera obscura that led to the first photograph. It was taken by Nicéphore Niépce, a French inventor, in 1827, and survives under the title View from the Window at Le Gras. He captured the image by focusing a camera obscura onto a 6.4x8.0 inch pewter plate coated with asphalt. Thus, the asphalt hardened in the brightly lit areas but could still be easily washed away in the darkened areas.

Niépce’s contribution was brilliant, but it had limitations. It took eight hours for the image to be fully exposed. Capturing a long-lasting image required a complex and methodical chemical process – without immediate treatment, the image would be lost. But another great inventor was about to make his mark: Louis Daguerre. Daguerre had been experimenting with ways to capture and reproduce images. Working together, they discovered an apt solution.

The partnership lasted until Niépce’s death, and in 1839, Daguerre introduced a new method of photography – the daguerreotype. This was the leap all modern camera technology pays homage to: A process that “fixed” images onto sheets of silver-plated copper that could be coated in iodine to enhance light sensitivity. After a short exposure, immersion in silver chloride created a lasting image.

Between Daguerre and the first modern film cameras, about five distinct iterations of camera technology came and went. It wasn’t until the 1940s that camera film as we know it was invented. The films used dye-coupled colors, a chemical process that connected dyes together in a close simulation of natural color. The first electronic camera emerged from the labs of Eastman Kodak in 1975, partially inspired by Jet Propulsion Laboratory research dating to 1961.

Consumer digital camera technology started to make an impact in the 1980s, with Sony being the first to market. The years that followed saw many companies strive to produce better image sensors that would lead to higher image quality. Today of course, the smartphone revolution has led to millions of people carrying powerful digital cameras in their pockets. This proliferation of digital camera technology is a culmination of the innovation in cameras throughout history, dating all the way back to the ancient camera obscura.