| By: Laura Moretz, Contributing Editor, A3

Autonomous mobile robots have evolved quickly, and safety guidelines are catching up. Melonee Wise, CEO at Fetch Robotics, said attitudes about safety are changing now that AMRs are more prevalent. “Early adopters may wave a hand and say, ‘Well, it’s not hurting anyone.’ But that’s not a real indicator of safety.” Fetch Robotics offers optimized piece and case picking solutions for logistics organizations and automated material movement within logistics or manufacturing facilities. 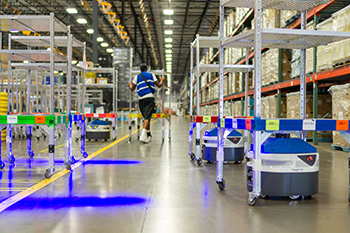 Fetch's CartConnect AMRs are designed to work alongside people, forklifts, and other material handling equipment within busy warehouse environments.

People who work with robots have more flexible options than before as autonomous mobile robots (AMRs) replace autonomous guided vehicles (AGVs). AGVs have a fixed path, which makes their movements easier to predict.

In contrast, AMRs adjust their routes on the fly and have a much richer sensor suite. “An AMR has 360-degree sensing so that it can see what’s going on in the environment in real time.”

The sensors enable AMRs to detect and move around people autonomously.

Wise said, “The AMRs started having challenges, like certain robots would hit people, or hit low-to-the-ground obstacles or would hit overhanging obstacles. It made it clear there were different challenges for AMRs than for AGVs.” In the warehouse environment, AMRs are ahead of driverless cars in many ways. “Everything that people are aspiring to do on the road with cars we are already doing,” she said.

Some companies add AMRs to their operations without awareness of safety issues. “As the AMR space became hot, we saw a lot of new entrants into the space. And without a standard, there’s no way to say that someone is playing fast and loose with safety,” Wise said.

Soon, manufacturers and buyers wanted clear safety standards for AMRs from organizations like A3. They asked, “What guidance can you provide through a standard to help us understand how we can assess the safety of these devices?” Wise was on the committee that created Mobile Robot Standard R15.08-1-2020, the new Mobile Industrial Safety Standard. In April, Fetch announced full conformance with the standard.

Customers buying robots are in a tough spot, Wise said. One vendor might warn against using an AMR for a particular use, while another might say “we can totally do that.” The second vendor might not be educated in safety, she said. With the R15.08 standard, vendors can point to safety guidelines for AMRs. 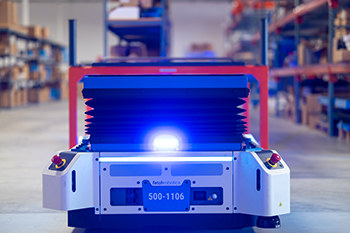 In addition to preventing dangerous situations, AMRs improve ergonomic safety for warehouse workers. Wise said that Fetch AMRs in some cases “reduced the amount of walking from 14 to two miles a day.” An AMR can reduce wear and tear on the body, such as repetitive-stress injuries and long-standing times that lead to back and knee pain.

Wise said, “With our smaller robots it’s about ergonomic improvement and reducing walking time, and with our larger robots, it’s about limiting interactions with human-driven forklifts, which have a tendency to have a lot of accidents.”

It is the AMRs’ sensors that contribute to low-level decisions, such as, “Am I too close and should I slow down?” to higher-level questions about potential encounters, such as sensing what an obstacle might be: “Is it a forklift?”

The refinement of sensors continues. “What we’re working on now is how does the AMR understand different things in the environment.” As sensors learn to distinguish between other robots, people, material-handling equipment, golf carts, tugger forklifts and attachments, they learn to decide how to respond to the obstacles they face.

Cobots at Universal Robots Safely Adapt to Their Purposes

Universal Robots (UR) makes collaborative robots, or cobots, which are adapted for applications. Roberta Nelson Shea, the global technical compliance officer for UR, said that application safety directly relates to a cobot’s use.

Shea said that robots have traditionally had a reputation for danger, “And some of that is just sensationalism. Everybody’s afraid that robots are going to go wild.” But this is not reality.

In Shea’s long career, she has seen companies who are inconsistent, safeguarding one machine and leaving others, nearby, completely open, she said. Safety needs to take all the machines into account.

It comes down to how a robot will be used, Shea said. “The biggest fallacy I ever heard is, ‘I bought a collaborative robot, so I don’t have to worry about safety.’ ” Instead, she said, “The only thing that can be made safe is an application.” 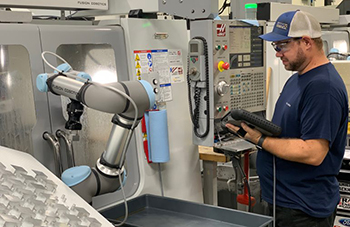 Machine shop Fusion OEM in Chicago, Illinois, has deployed UR cobots to tend its CNC machines in lights-out production. The cobots enabled the company to cut its delivery time in half, taking a 500 unit order from six to three days delivery.

Each application has a different purpose that determines safety needs. Any cobot has multiple capabilities. “If you don’t know what they are going to be used for, how can you say they are going to be safe in advance?” she said. Cobots may be used for welding, applying adhesives, material handling, assembly, inspection, machine tending, packaging, or palletizing. “What if it is packing knives? Knives are pretty dangerous. So it’s all in how something is used.”

UR sells to small, medium, and large enterprises. “We’re trying to make a product that’s useable without highly specialized knowledge and skills.”

The R15.08 standard was needed for some time, she said. “The ISO standard covers mobile robots but covers them from a slightly different angle from driverless industrial robots. I think that a future step will be some convergence or differentiation of when to use the two standards.”

Shea said Universal Robots added a safety function to its cobots a few years ago, the safe home position. This safety function aids in the integration with AMRs, she said. “Is that everything? No, there’s more that could be done, and I’m sure we will get there over time, not only by us but other manufacturers, because we all want our products to be used in more and more applications. Our products will become even easier to integrate, easier to use, and easier to figure out.”

Sometimes, integration improvements are easier than adding safety functions. For example, some cobots are plugged into the wall. “We’re not going to run an extension cord while an AMR with a cobot is rattling around the warehouse.” Instead, these cobots are powered by the AMR.

Shea said: “There is constant exploration as to how to make integration better and safer. A lot of this comes from customer feedback, and from market feedback.”

Stay updated on robot safety and standards by registering for the Robot Safety Update webinar on July 15 and the International Robot Safety Conference, September 20-22, 2021.

Cybersecurity a Must for Safe IIoT Robots

Why is Machine Guarding important?