Motion control removes sway and skew to improve efficiency and stability in container loading and storage.

In our global economy, international shipping plays an essential role. Every year, billions of tons of freight pass through ports around the world. Most facilities have their berths subscribed months, or even years in advance, so the faster they are able to unload and reload cargo, the better. That puts increasing pressure on infrastructure to not only operate efficiently and accurately but above all reliably. To meet this challenge, crane manufacturers increasingly turn to automation and motion control 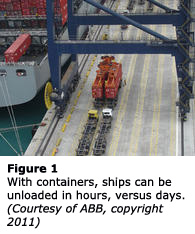 Today, the bulk of ocean-going freight moves on container ships. As the name suggests, container vessels carry cargo enclosed in sealed metal intermodal shipping containers that can go direct from vessel to surface vehicle. Container sizes vary but are typically either 20 ft or 40 ft long by 8 ft high and wide. Fully loaded, they can weigh as much as 32 tons.

The container approach cuts the time it takes to load or unload a shipment from days to hours. Containers arrive at the container yard for staging and storage. Cranes move them onto surface vehicles for transport to quayside so that additional cranes can load them onto the vessel (see figure 1). When the vessel arrives at the next port, cranes remove the containers from the ship and deposit them on truck chassis, where they can go right onto the road.

Cranes 101
A container crane containers consists of a gantry on rails that can either move along the container yard or up and down the length of the quay next to a vessel (see figure 2). Retractable booms hang out over the vessel to support the crosswise travel of a trolley that can sit as high as 130 feet above the quay. A fixture called a spreader, suspended from the trolley by cables, grabs and holds the containers so that the trolley can hoist, move, and lower them.

The equipment ranges from high speed manual cranes to remote-control versions to fully automated units. Hoists can move as quickly as 500 ft/min for an empty spreader, and trolleys can travel at up to 1200 ft/min. In a manual crane, the operator typically rides in a cab on top of the trolley so that he or she is always directly above the load. In a remote crane, they may run the equipment from the ground.

Perhaps the most essential element is the hoist. Older designs based on contactor controls are either fully on or fully off. The brakes release, the load drops, and then the brakes re-engage to catch the load. The process stresses the mechanical structure and the cables.

With motion control, the motors and drives accelerate and decelerate the load so that the function of the brake is only to provide static holding force. Done properly, the approach reduces wear and increases lifetime. "It sounds simple in practice, but if you get that wrong you can damage the equipment," says Barry Wiles, Industry Manager, Crane Systems at Avtron Industrial Automation Inc. "If you don’t have torque on and you open the brake, the load can start to slip or fall. If the brakes catch it, you’re putting stress on the mechanics and on the [cables]." The solution is to turn the drive on and develop torque in the motor. The system can verify torque before opening the brake and beginning to move the load.

A shipping container at the bottom of a long cable run essentially forms a pendulum. Motion, exacerbated by wind pressure and even resonant vibrations in the crane structure itself, can create sway. Crane operators find themselves caught between the pressure to move loads quickly and the desire to minimize settling time. A swaying load not only increases settling time, it can also stress the crane structure, the cables, and motors, not to mention present a safety hazard to personnel, ground vehicles, the ship, and other containers. 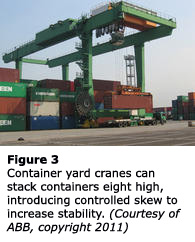 Skew presents another challenge. Containers are opaque boxes that give no hint to the distribution of objects inside. Improperly loaded, containers can tilt or skew when lifted. Containers can be stacked five or even eight high (see figure 3). Given the heights involved, small errors can rapidly compound to produce an unstable structure. The uneven surfaces found in container yards only compound the problem. The crane doesn’t just need to stack the containers evenly, it needs to offset them just enough to create a stable structure. In other words, sometimes skew is a problem, sometimes carefully controlled skew is the solution.

In the past, crane operators spent years acquiring the necessary skill set. Today's state-of-the-art crane systems leverage observer control to compensate for sway and skew. The process starts with position information. “What we need to be able to do first is know exactly what the crane has picked up and what its attitude is," says Steve Deutsch, General Manager, Americas for Crane Systems at ABB (Zurich, Switzerland). “Is it skewed left or right? How is it positioned?” Cranes typically track the position of the container by monitoring spreader position using a variety of sensors such as lasers or LED bars tracked by cameras. Systems integrate load cells to determine the weight of the containers. “Based on these algorithms and knowing where our load is, we can automatically remove the sway," Deutsch says. "If the container skews left or right as we’re putting it down, we can compensate so that we can automatically land on a terminal chassis, for example.”

Special challenges
The environment and application combine to present some unique challenges. There are the obvious environmental issues of temperature swings, wind, and other inclement weather, as well as humidity and salt air, not to mention waves. Depending on the age of the crane, it may not include a good enclosure for electronics. “Most of your standard drives are built to go into an air-conditioned room on a plant floor where there's a solid ground," Wiles says. "A crane is a large metal structure. There is no true single-point ground. You have to be careful how you ground things and where you connect them. Otherwise, you end up with grounding and interference issues."

The trolley has to be connected electrically when it moves along its track. Depending on the location of the trolley along the boom, the cable can form a series of swags known as a festoon. Even with shielded cable, festoons present a perfect environment for electrical crosstalk. As a result, designers tend to use noise-immune fiber-optic cable whenever possible.

On the positive side, container cranes also permit unusual architectures. Typical cranes feature four motions: the back-and-forth motion of the trolley, the up-and-down motion of the hoist, the linear motion of the gantry, and the angular motion of the booms. Several of the axes of motions tend to be mutually exclusive. In the normal course of operations, a crane operator will not simultaneously run both trolley and boom, for example, or hoist and gantry. As a result, one drive can actually command multiple axes.

Avtron, for example, often runs two and even three axes with the same drive. With the addition of extra contactors, as well as safety algorithms, the system can allow the operator to switch from one operation to the other. The architecture saves on equipment costs as well as space and weight. The latter is important. Despite the fact that cranes can be enormous, minimizing inertia is essential to maximizing speed. A hoist might be run by a pair of 1500 hp motors driven by 1 kA drives that weigh in the neighborhood of 700 pounds each. Cutting even one drive can make a big difference in the maximum speed and also the lifetime of the system.

Although performance matters, perhaps nothing is more important in container cranes than reliability. With loads weighing tens of tons, failure opens up the possibility of not only wrecking the goods in the container being moved but doing infrastructure damage that can cost millions, not just in repair but in lost revenues. “In Jacksonville, Florida two and a half years ago they had a crane that was not properly stowed," says Wiles. "They had a microburst of wind and the crane skidded down the runway and collided with another crane and they both collapsed.” Even if the fault is a matter of a few hours or days rather than months, it still presents problems. A ship not moving is losing money, so contracts often include penalty clauses for delays. If the schedule change is large enough, a vessel may switch to a different port, which presents the risk of losing future business to the alternative port.

Certain types of cargo present other risks. Avtron, for example, is currently working on an ordnance-handling system for the U.S. Navy. The application presents all of the usual challenges of ship-to-shore cranes as well as an additional demand for reliability. After all, when a crane is dangling 50 tons of explosives over a ship, failure isn't really an option.

As a solution, Avtron used load sharing. In the crane, each of the two main hoist drives runs up to eight motors in parallel. A secondary drive handles the two hoist motors and both sides of the gantry on the crane. An additional, smaller drive runs both trolley and boom. "To protect against a failure, Avtron installed another drive in the control room, the same size as a hoist/gantry drive, and set it up with another set of contacts," says Wiles. "If any of the other drives fail, the operator can go into a password-protected HMI screen to switch to the backup drive in so that within a couple of minutes the crane is back up and running."

Automation for all
It’s not enough to provide an assist to operators. The future of portside cranes lies in automated systems. “At one of our customer sites we’re running a remotely operated dockside container crane," Deutsch says. "The operator sits back in a control room. Basically it's running in automated mode most of the time, but vessels can move even when they’re tied up to the dock. To compensate for that, you may need a little more operator interaction. Our [eventual] goal is to do this fully unmanned and automated.”

Because container yards don't involve the variability of a ship at anchor, they better lend themselves to full automation. At ports in Asia and Europe, container yards are fully automated. Unmanned cranes stack containers or place them on automated guided vehicles for transport to quay or truck, and vice versa.

The North American has lagged behind but it’s starting to make the move to automation, Deutsch says. “There are about eight different greenfield sites [in North America] that will be coming online between 2014 and 2018, with hundreds of pieces of automated equipment," he notes. “The most difficult part is being able to control your load such that you can put it down within millimeters of where you want it to be. A lot of people can do that but if it takes three or 4 min. to [to settle], then you’ve just lost all your productivity. You need to be able to very accurately measure container position and then control it so you can put it down in a time effective manner.”

Human operators are skilled, but they can get fatigued and lose concentration over time. Moreover, the speeds of trolleys may be approaching the limits of human comfort. To increase efficiency and reduce costs in shipping, ports and crane manufacturers will increasingly leverage motion control technology. Offering performance, speed, and above all reliability, motion control provides solutions to keep goods and services moving around the world.

Acknowledgements
Thanks to Rich Schultz of Advanced Crane Technologies Inc. for useful conversations.

They're Gliding Over Water – On Solar Power