Read Part Two of this Article 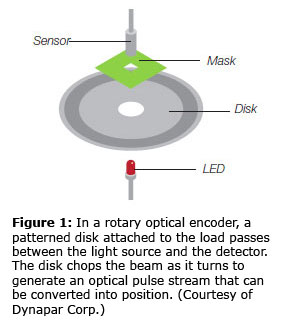 Optical or magnetic? Inductive or eddy current? Incremental or absolute? Learn what encoder to choose for your application.

Engineering is a matter of trade-offs--there is no one best solution, there’s only the best solution for the application at hand. When it comes to motion feedback, essential for motion control, encoders are frequently that best solution. The most obvious way to classify encoders is by sensor type, which includes optical, magnetic, and inductive technologies. Optical encoders in general deliver the highest accuracy and resolution, although because they are optical, they can have problems with contamination, shock, and vibration. For harsh environments, magnetic and inductive encoders provide surprisingly high resolution and can survive the toughest conditions around. Taken as a group, encoders offer a variety of choices that enable OEMs and machine builders to achieve the accuracy, resolution, robustness, and price point that their project requires. In part one of this two-part article, we'll discuss optical encoders, 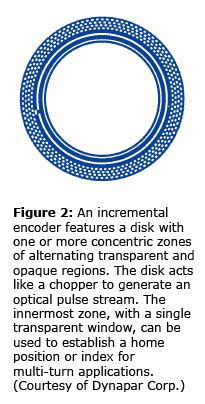 with a focus on applications and trade-offs. Part two will focus on magnetic and inductive designs.

Optical Encoders
An optical encoder consists of a disk that passes between a light source and a photodetector (see figure 1). The disk is typically attached to the load while the source and detector remain fixed as part of the encoder body. Patterned in a series of opaque and transparent regions, the disk modulates the input beam as it turns. The photodetector converts the optical data into electrical output that provides feedback to the rest of the system.

Like motors, encoders are also available in linear formats, which are analogous to the rotary versions. For linear encoders, the read head containing the source and detector remains with the load while the sensor strip, or scale, stretches along the length of travel.

The simplest implementation of the optical encoder is the relative, or incremental encoder, which monitors displacement from some pre-established home position. An incremental encoder uses a disk patterned with one or more concentric zones, or channels, each broken up into a series of transparent and opaque regions that are arranged in a 50-50 duty cycle (see figure 2). The disk chops the beam to create an optical pulse stream. The on-board electronics convert that into counts, but the system requires off board electronics in the motion controller, PLC, or driver to translate those counts into speed or position. The number of transparent regions on the disk corresponds to the resolution of the encoder, which is typically given in pulses per revolution (PPR). An additional ring on the inside with a single transparent slot, known as the Z channel, can be used to establish the home position. For applications with very long travel, the Z channel can also be used to track multiple turns of the disk.

Incremental encoders can be split into single-channel and quadrature types. Single-channel encoders track counts to determine displacement, but because the output looks identical whether they are turning clockwise or counterclockwise, they cannot be used to detect the direction of motion. For applications that only need to monitor speed, like fans and pumps, a single channel encoder provides a simple, economical solution. 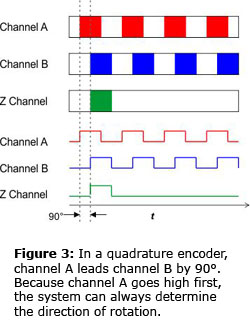 The output of a quadrature encoder can be decoded in multiple ways. The exact technology and terminology differ depending on the type of encoder and circuitry being used. Here, let’s assume an edge-detection system based on pulses. The simplest form triggers off of the rising edge of the A channel, which gives it a resolution equal to the PPR of the code disk (see figure 4). This is also known as 1X decoding. We can increase the resolution by triggering off of both the rising and falling edges of channel A (2X decoding). This effectively doubles the resolution, giving 800 pulses per revolution from a 400 PPR encoder, for example. To further enhance the performance, the encoder also can be set up to trigger off the rising and falling edges of both channel A and channel B (4X decoding). Now, we can get 1600 pulses per revolution from that 400 PPR disk. 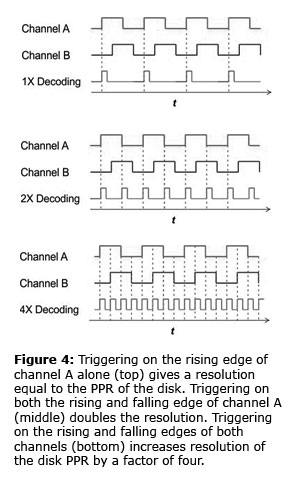 Optical mask and phased-array encoders
As resolution rises in quadrature encoders, a problem emerges: The detectors tend to be large compared to the width of each slot, which can lead to spillover between channels. Adding a mask that matches the pattern of the channels helps clean up the signal (see figure 5). The trade-off with this type of design is that the air gap between disk and mask/photodetector can be as small as 40 to 80 µm (0.0015 to 0.003”). Such tight spacing imposes strict specifications on disk parameters such as flatness, eccentricity, and alignment, and makes the devices more vulnerable to shock and vibration.

A mask can also be used to create a quadrature encoder from a single-track disk. In this case, the single track generates the signal for all channels and the mask introduces the 90° phase shift. Masks can also be used to define a complementary channel 180° out of phase with the primary channel--A and A’, B and B’, for example. This approach can be used to compensate for thermal variation by removing common-mode signal variation.

At low resolutions, encoder disks can be cut out of metal, with the gaps forming the transparent slots. Metal disks can be a particularly good solution for high shock and vibration environments, but their resolutions are limited--if the slots are spaced too closely, the disk will lack mechanical strength. Glass substrates patterned with metal deliver higher resolutions, but their fragility makes them a bad fit for high shock and vibration applications. Mylar substrates are tougher than glass in many ways. Even they have limitations, however--improperly mounted, the disks can sag and they can oscillate at very high RPMs. 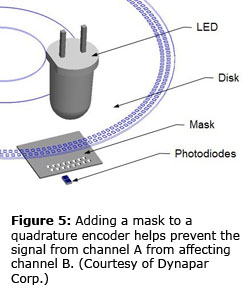 Phased-array incremental encoders use solid state technology to provide a more robust solution. Instead of a discrete detector for each channel, a phased-array encoder features an array of detectors integrated at the chip level with an application-specific integrated circuit so that each channel is covered by multiple detectors (see figure 6). This approach averages the optical signal, minimizing variations introduced by manufacturing errors like disk eccentricity and misalignment, improving performance while relaxing fabrication tolerances. The approach also increases the air gap allowed between the disk and the phased-array chip, making the devices easier to build and install. All of this results in high-performance devices that can be robust enough to tolerate shock loads as high as 400 g’s.

Absolute optical encoders
An incremental encoder generates an output of pulse streams that can be converted to position or speed. An absolute encoder outputs a unique digital word for each angular position of the disk. As a result, an absolute encoder maintains a record of its position even after shutdown or power failure. This characteristic is particularly important in the case of high-reliability applications like elevators and surgical robots, for which loss of position could be catastrophic. It can also be useful for cases in which the object moves only occasionally but cannot be rehomed.

Instead of one or two evenly-spaced channels, the absolute encoder code disk bears multiple concentric zones with distinct patterns, each read out by a separate LED/detector pair (see figure 7). Each zone corresponds to one bit of resolution; an 8-bit encoder, for example, would have eight zones. Although standard absolute encoders typically feature 12 bits of resolution, corresponding to 4096 positions per rotation, devices have been made with as much as 22 bits, which corresponds to 4.19 x 106 positions. For applications requiring multiple turns, the encoder would include a secondary code disk that indexes with each full rotation of the primary disk. This arrangement maintains a unique digital word for each position.

Optical encoders have traditionally been the solution of choice for high-performance applications like semiconductor lithography, providing resolutions as high as 10,000 PPR. This level of resolution is not just used for positioning, however. Systems that operate at extremely slow speeds need very high-resolution feedback in order to ensure sufficient counts per unit displacement to effectively monitor motion.

Although optical encoders have the reputation for being too fragile for harsh environments, the advent of the phased array encoder has allowed the technology to penetrate markets like military/aerospace, oil drilling, and off-road vehicles. Because they can tolerate very high magnetic fields, optical encoders also provide effective solutions for applications like MRI machines.

On the downside, the LED output intensity decreases over time, especially in high-temperature environments. In the extreme, this effect can cause an encoder to miss counts. Filtering techniques can help guard against this effect, but many optical encoders include sensors that monitor LED health to prevent this occurrence. Optical systems also tend to be less robust with respect to environmental contaminants like dust, oil, and other liquids. For especially dirty environments like wood-processing plants or food and beverage lines that require daily washdown, units with proper IP ratings are a must.

Taken as a whole, optical encoders provide OEMs and machine builders with a rich set of options to address a wide range of feedback needs. For the exceptions, other technologies like magnetic and inductive encoders come into play. In part two of this article, we’ll take a closer look at these types, how they work and what problems they’re best suited to solve.

Acknowledgments
Thanks go to Jeff Ireland and Mark Langille of Dynapar Corp. and to Ken Kaufenberg Heidenhain Corp. for helpful background information.

Read Part Two of this Article