When it comes to non-visible machine vision, the infrared spectrum is the “hot spot” on the electromagnetic spectrum.

Today, machine vision is venturing into new parts of the electromagnetic spectrum such as the ultraviolet, while new camera architectures are expanding the use of infrared imaging for industrial applications.

“When I think about how we’re using non-visible machine vision, I think of two general categories: one is where we’re imaging the “light” that’s already present, and the other is when we use non-visible infrared, UV or X-ray “light” as the illumination source but collect visible images,” explains Fred Turek, Chief Operating Officer for FSI Technologies Inc. (Lombard, Illinois), a machine vision company that offers both equipment manufacturing and system-design services. “If someone is an integrator, they can only design 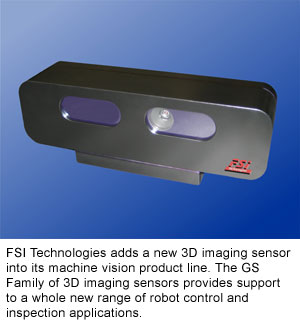 so many systems. If someone is only selling products, they only sell a certain type of hardware. We lie somewhere in between. Our customers tend to bring their tough imaging challenges to us, and we get into a lot of non-visible imaging system designs that way, eventually working with an integrator to deploy the system.”

“Infrared is a good example,” he continues. “In the far infrared, we’re usually monitoring heat, such as monitoring molten metal in vessels. However, we might use near-infrared light to excite a photovoltaic cell and read out the response as part of a quality check, or an NIR light with visible light camera that is sensitive in the near infrared to inspect surfaces that normally would not offer enough contrast for automated inspection. Our new GS 3D sensors project a grid of near-infrared light for 3D robotic guidance and vision without having to scan the part. When used in conjunction with the PowerEye machine vision system, GS 3D sensors can be used in applications such as bin picking, robotic manipulation, sorting products, mold clearance checking, and space monitoring and object recognition. In addition, the 3D technology will aid in determining spatial positions and measurements.”

FLIR Commercial Systems Inc. (Nashua, Ne Hampshire) is one of – if not the – largest providers of infrared technologies for machine vision applications. While commercially available IR cameras traditionally suffer from low resolution and low frame rates because of government restrictions on this dual-use technology, FLIR has recently shrunk the size and cost of its IR industrial cameras to the point where the technology is being evaluated for much larger number of automation tasks.

“While our far-infrared cameras have always had an important place in ladle inspection to avoid refractory breakout in steel production, for example, our new A-Series cameras are expanding that base,” explains Paul Czerepuszko, Director of Business Development at FLIR Commercial Systems. “First, integrators such as Connors Industrials have expanded far-infrared monitoring during steel production to automate previously unheard of applications, such as slag detection. But at the other end, our FLIR Compact A-Series IR cameras are now GigE Vision compliant and offer good resolutions at 60 Hz for less than $5,000, while the new Quark IR thermal camera core is the size of a U.S. quarter. Not only are we seeing demand for these systems in smaller UAVs developed by the military, but the promise of using infrared cameras for high-value asset management, such as electrical substations, is finally becoming cost effective and growing in demand.”

While x-rays have been used for decades for medical and off-line industrial applications, the number of industries using inline x-ray inspection systems or with interest in the ultraviolet portion of the electromagnetic spectrum has been relatively low.

“While we use UV light for curing adhesives as part of our machine vision camera manufacturing, there isn’t much call for imaging in the UV spectrum,” explains FSI’s Turek. “However, there is a lot of demand for inspection systems that use ultraviolet light stimulation to cause a visible fluorescent response, such as the inspection of optical coatings. For clear coatings, exciting and imaging a tracer chemical can be the best, most cost-effective way to evaluate an ‘invisible’ coating when you can’t use other optical tricks. The visible fluorescent signal is weak, so you typically use a strong UV source and bandpass filters to isolate the fluorescent signal, but it can be done.”

X-ray systems, both medical and industrial, produce huge amounts of data for processing into 3D shapes and useable images. Traditionally, the processing elements have been part of the bottleneck for the system rather than image acquisition. According to Joe Sgro, CEO of frame grabber specialist Alacron, Inc. (Nashua, New Hampshire), new accelerated processing units that combine both CPU and GPU on a single die represent a paradigm shift for x-ray imaging.

“AMD recently came out with an APU with 4 cores capable of 700 gigaflops,” Sgro notes. “Add a large FPGA on there, and you have plenty of horsepower for data-intense applications with enough room and flexibility for an OEM to include their own ‘secret sauce’ differentiators.”

As the examples above clearly show, machine vision’s growth is not just in the visible world, but across the electromagnetic spectrum as signal-processing techniques push machine vision technology into new industries and applications.