Choose the Best Ethernet Cable For the Application

The introduction of industrial Ethernet has revolutionized machine design and operation. By networking together smart components, machine builders allow users to immediately access any part of the machine by connecting to the network. Shop-floor to top-floor communications streamline supply chain management and process control. Smart components send diagnostic information directly to the desktop of maintenance staffers, allowing issues to be caught early and handled during planned

downtime versus unexpected line stoppage. Of course a network is only as good as the cabling it runs on, which makes proper choice of cable essential.

Ethernet was originally designed to connect computers and printers in an office environment. Cables weren't even shielded—the twisted pairs introduced a certain amount of noise immunity and communication speeds were low enough that noise wasn't an issue. Today, all of that has changed. Ethernet operates at speeds as high as 100 Gb/s with cable runs of up to 100 m. To combat isolate signals from noise, manufacturers offer cables with sophisticated shielding, structural members, sealants, etc. (see figure 1).

Developing a cable that provides noise immunity and flexibility requires a delicate balancing act. The typical approach is to use a double-shielded cable (see figure 2). It starts with the foil shield typically used in a commercial environment coupled with a braided shield, typically a mix of copper and stainless steel. If the foil shield breaks down, the braiding protects the conductors from damage. The result is a cable that can tolerate cycle counts ranging from 3,000,000 to 10,000,000 flexes while protecting against EMI.

Pressure jacketing can also stabilize the twisted pairs, which can help eliminate noise. In a moving cable, the twisted pairs may slide relative to one another, not only generating friction and wear but crosstalk. This can cause serious problems in some instances. "Missing data can be critical," says David Gallagher, Product Manager L-com Global Connectivity. "An automotive company in Germany had a machine weld itself to the side of a vehicle because it didn't get the correct instructions. It pulled the chassis right off the assembly line." Ethernet protocol includes error correction steps, but by wiring the system properly, designers can minimize the need.

Choosing the Right Gauge
Initially, cabling manufacturers seeking to develop an industrial Ethernet cable over-engineered the product. In an analogy of the map with a 1:1 aspect ratio that was too big to lay out anywhere, cabling designed to withstand extremes of temperature, noise, and physical deformation, but the result was too big to use. "About seven or eight years ago, the cable that that was capable of withstanding the industrial environment was over half an inch in diameter," says Gallagher. “It didn't fit on the plugs that we used for Ethernet. The cable was bigger than the plug. It was so heavy, so difficult to terminate, that we walked away.”

Today, manufacturers and users have discovered that lighter cable may actually present a better solution for many industrial applications. At first blush, it would seem that thicker is stronger and that industrial applications would require the heaviest possible cable—a 22-gauge, or even 20-gauge cable rather than the 24 gauge used for standard office applications (gauge number is inversely related to diameter). That is not necessarily the case. A smaller, more flexible cable such as 26 gauge may actually do a better job of surviving a continuous-movement application. It’s lighter, which means it introduces less inertia in high-speed operations requiring frequent reversals. It also delivers a tighter bend radius.

Smaller-diameter cable also weighs less. In a typical factory application, the floors are sturdy and the weight itself does not tend to be an issue. In a motion application, however, the greater the mass, the greater the inertia, which can compromise accuracy and also fatigue components prematurely.

Narrower diameter cables tolerate less noise, however, which can restrict them to only a portion of the 100-m run defined for Ethernet cables. “You could de-rate length of cable travel by up to 50% by going down to 26-gauge cable,” says Gallagher. “That can impact an installation very rapidly so choosing the right gauge is going to make all the difference in the world.” 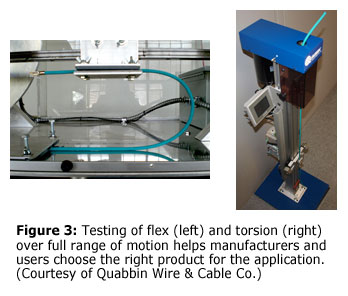 It's a matter of trade-offs. 22- or 20-gauge cable may provide a longer run, but shielding can present a problem. The cables may also be too thick to permit the use of standard RJ-45 connectors. Shielding also increases the vulnerability of the cable to cracking. “In the past it's been hard to get a shielded cable that would survive flex, because the first thing that starts to break down is the shielding,” says Kevin Drummond, Director of Sales and Marketing at Quabbin Wire & Cable Co. “It rubs against itself, it rubs against the twisted pairs. It starts to crack and tear, then it has sharp edges and will start to cut into the inner core of the cable, leading eventually to failure.” Proper testing over full range of motion allows manufacturers to better understand shielding wear and which cable each application requires (see figure 3).

The choice of gauge is not a one-size-fits-all solution. Sometimes users may need to do a full 100-m run for data. To lower noise, they can use a stranded cable rather than a solid horizontal type. A typical approach is to use a thicker cable like 22-gauge, or even fiber-optic cable, to run to the automation island; at this point, the design switches to 24- or even 26-gauge to reach the moving elements of the apparatus.

Making the Connection
All cabling needs to be terminated with connectors. The most common Ethernet connector is an RJ-45 plug/jack combination. The design features a spring contact on one side and a solid pin on the other. It's economical and can simplify troubleshooting since most laptops feature an RJ-45 port. 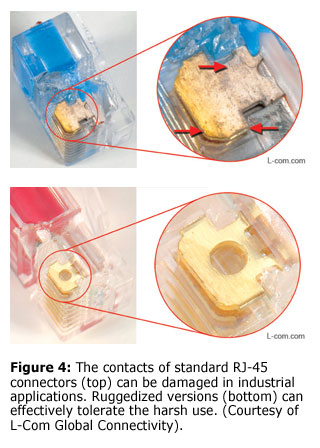 The problem is that the RJ-45 was originally designed for flat cable in an office environment. More recently, versions targeted at round cables have been developed, but with limited applications. “The commercial-grade connectors for an office environment just don't have the strength on the back of the connector,” says Gallagher (see figure 4). Instead, designers turn to  a shielded RJ-45 design that features a metal housing with a clamp that completely surrounds the cable and crimps down on the outside of the jacket. “You get a great termination there. You don't have to worry about the cable coming loose from the connector.”

The IEC 61076 standard defined the M-12 connector, a ruggedized four-pin DIM-style design. M-12 connectors are robust in the face of pressure and strain on the cable. The pins may rock in their sockets somewhat but they will maintain the connection. In comparison, an applied strain can rock the connector inside of the jack of an RJ-45 device, potentially impacting the connection. In such cases, the system either requires strain relief or a switch to a different device. “If it's an environment where you apply strain relief to the cable prior to going into the port, the RJ-45 can be very suitable,” says Gallagher. “If the cable is going to be pulling directly on the connection, though, then the M-series connector is the way to go.”

Shock and vibration are perennial issues for motion control, especially in the industrial environment. Spring-loaded RJ-45 connectors do not tolerate such mechanical disturbances.  “If you vibrate the connector, you're going to vibrate the jack,” Gallagher observes. “The plugs are very tough and they'll beat the daylights out of a jack in a vibration environment so in a high vibration environment, I'd avoid an RJ-45 connector and go with an M-series style instead.”

Factory termination ultimately yields best performance. Floor termination involves technicians using hand tools, so the crimps vary from person to person. “I've seen people twist [the conductors] a little more just because they like the look of it,” says Drummond. “Changes like that can affect the performance.”

In addition, as the tools wear over time, they produce less effective terminations. “Folks ask me all the time should I calibrate my hand tools, and the first thing I say is, ‘It's probably time to replace the tools because chances are you're asking me that question because you had a bad crimp and chances are you have a bad tool,’ says Gallagher. “For a technician, sometimes the best solution is having a little bin at their office that holds a few bags of factory terminated cables at the most common lengths they use.”

Reaping the full benefit of industrial Ethernet requires right networking hardware. Today, machine builders have a wide range of cabling and connector choices at the fingertips. Choice of cabling and connectors is not a decision to be made in a snap, but with careful consideration of the application requirements of the trade-offs involved, OEMs can arrive at the system that provides performance they need at the price tag they can afford.

Parker and Brammo Partner Up to Form Team Parker Brammo

The Biggest Trend in Controls is Choice