Read our RIA Robotics blog and see why some common misconceptions about service robots aren’t accurate. 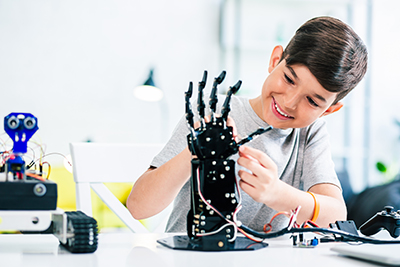 When you think about service robots, what comes to mind? Maybe you think about that little CGI trash-compacting robot that was all alone cleaning up a future, wasted earth. Or maybe you think about a faraway robot rover scouring the surface of Mars, searching for signs of life. Perhaps you recently saw a robot your local grocery store mopping up spills.

One major misconception about service robots involves their design. In the past, you may have seen a service robot that had humanoid features. It also may have mimicked human behavior to carry out tasks that a human would normally do.

However, humanoid appearance is not a requirement for service robots. Service robots might have two legs, or they might look like a suitcase with four wheels. They might even fly. ISO only offers the following description, explaining that service robots “perform useful tasks for humans or equipment excluding industrial automation applications.”

Service Robots Will Take All the Jobs

Unfortunately, many people believe that a robot could eventually replace them. Service robots are already becoming common in manufacturing, healthcare, and transportation. They’re catching on in hospitality, reception, and kitchens, too. Robots may replace some jobs, but automation isn’t new. In each new wave of automation, the market shifted.

Some workers feel that service robots will take all the high-paying work. After all, wouldn’t businesses want to eliminate their top-earners? If that were a company’s goal, spending capital on service robots would likely be a big mistake. Robots are best at performing repetitive, tedious tasks, which are often the lowest paying jobs on the floor. What’s more, robots aren’t cheap to implement or maintain, so companies who want to implement them have to be prepared for significant investment.

Workers often worry whether robots are safe. They can be heavy, especially when carrying large payloads. Some feel that despite all the programming and sensors, you can’t control what a service robot is going to do. It could carelessly injure an unsuspecting human worker.

Yet, service robots are programmed to work independently and safely around humans. They can even perform tasks that would be risky for a human, like working with hazardous chemicals or entering unsafe environments. ISO has developed safety rules for robots that keep humans protected from potential harm, while employers perform extensive risk assessments to assure a work environment is safe.

Stay up-to-date on the latest news and trends in robotics by subscribing to our Robotics Online Webinar Series.