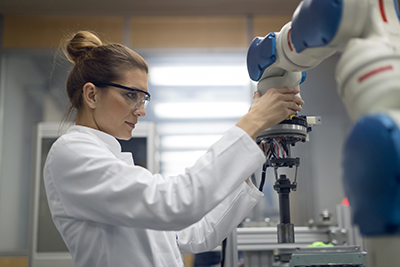 Companies today use collaborative robots for manufacturing to address a wide number of challenges, including the growing labor shortage. The jobs often consist of fast-paced, repetitive tasks in environments that are far less comfortable than an office. So, attracting employees to manufacturing jobs can be difficult.

In the past, manufacturers offered little in the way of challenging jobs on the assembly line. But the advancement of collaborative robots has allowed production facilities to adjust to attract talent. Manufacturers are now searching for ways to improve working conditions by making jobs more rewarding while still improving efficiency.

Manufacturers often find that new employees don’t last long at all. It’s not uncommon for a worker to quit before completing their first day. Imagine if an hour into a job, you realized that you’d be doing the same five-minute task over and over for forty hours per week. Many workers quickly realize that such a job isn’t for them.

Collaborative robots work with humans to do the most boring of tasks and let human workers focus on meaningful jobs. This allows workers to build skills that result in more exciting positions that often result in higher pay. Employee engagement and job satisfaction go through the roof, allowing companies to recruit even more talent.

How Are Blockchain and AI Impacting Swarm Robotics?

The Future of the Canadian Manufacturing Industry

Production efficiency is often at the top of a manufacturer’s initiatives. Many facilities operate on wafer-thin margins. Assembly lines must be fast and nearly error-free to meet strict metrics. Product consumers leave little room for error.

Companies avoid errors that cost customers by using collaborative robots for manufacturing. Collaborative robots can assist humans so that crucial steps aren’t skipped and errors aren’t made in the first place. But cobots can also perform tasks that contribute to mental fatigue and errors, such as detailed inspections.

Instead of resenting collaborative robots for taking away work from humans, workers often appreciate the value they have to offer. Employees paired up with collaborative robots see their productivity increase while the time they spend on the most boring parts of their job goes down.

Learn more about the ways cobots are empowering manufacturers with our blog Collaborative Robotics and Today’s Manufacturing Startups.