Autonomous cars are coming, for numerous reasons, and advancements in technology are improving their performance. 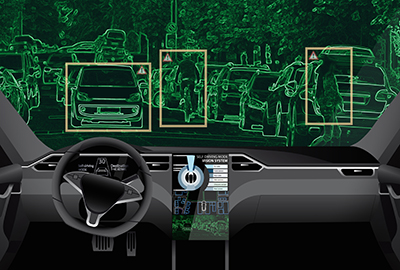 Autonomous cars are coming, for numerous reasons, and advancements in technology are improving their performance to the point where their current novelty will become future acceptance and commonality.

One area where autonomous cars need improvement is in autonomous vehicle navigation and safety. The scariest part for most people when it comes to autonomous cars is there’s no one at the wheel, and the idea of relying on a machine to not run you over is a major leap of faith. With current technologies, there are limitations to navigation and safety functions. Currently, vehicles use RaDAR or LiDAR, with Time of Flight (ToF) LiDAR systems being prevalent. These technologies have their limitations though and are one of the reasons for the unease around autonomous vehicles.

LiDAR and RaDAR both work on the same principle, sending out a wave and using the reflections to determine the distance, location, and velocity of surrounding objects. LiDAR utilizes laser or light beams, while RaDAR utilizes radio waves. Both detectors can be used to determine objects surrounding a vehicle and provide input into navigation and avoidance programs. Embedded vision systems utilizing LiDAR more readily allow autonomous vehicles to determine not only the distance and velocity of surrounding objects but also the shape for potential object recognition. For example, this type of system can tell the difference between a child and the ball they run into the street after.

While LiDAR is preferential to RaDAR, the current Time of Flight LiDAR technology has its limitations. Detection capability is based on output intensity, which means it needs bright light to see further. Brighter lights create a vision hazard for people, as the light beam can damage a person’s eyes. And, ToF LiDAR is susceptible to interference from other LiDAR systems and even sunlight, making their reliability in certain conditions suspect.

A new LiDAR technology, Frequency Modulated Continuous Wave LiDAR, or FMCW LiDAR, removes a lot of those limitations. Utilizing lessons learned in RaDAR technology, LiDAR has moved from Time of Flight operation to Frequency Shift operation. The benefits of this change are many, ranging from reduced light intensity requirements to improved resistance to interference. With FMCW LiDAR technology, LiDAR can be used to detect objects in more conditions with less interference and still be eye-safe - a huge improvement in overall safety for autonomous vehicles. Upcoming technology improvements will make it possible to see objects as small as 1.5” at 200m, which is like picking out a golf ball from two football fields away. That kind of detection capability will allow autonomous vehicles to react to objects out to 200 meters away at highway speeds. As a result, this will decrease an autonomous vehicles’ reaction capabilities to about half the reaction time of the average human.

With advances in LiDAR technology, and especially FMCW LiDAR, embedded vision systems in autonomous vehicles are moving in a direction to create vehicles that are substantially safer for humans. As these capabilities mature, autonomous vehicles will become more commonplace and their safety record will begin to show their benefits over human operators.

To learn more about advancements being made in the automotive industry, visit the VisionOnline.org blog.