The micro #bristlebot is well-suited for use in the human body and can one day perhaps fix damage on a cellular level. #robotics 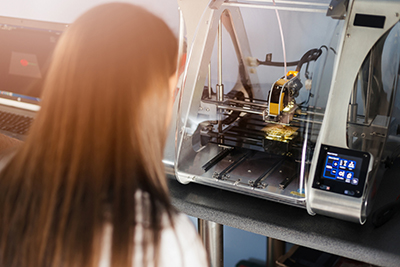 How the Micro-Bristle Bot Works

The bots are believed to be the smallest robots powered by vibration. The micro-bristle bot uses a piezoelectric actuator to move. The actuator is glued onto the bot’s 3D printed polymer body.

The actuator generates vibration and is powered externally by an ultrasound, sonar, or tiny speaker. A piezoelectric shaker is able to blast out precise frequencies that power the actuator. Once the frequency is perfectly tuned to the bot’s onboard actuator, the bot comes to life. The vibrations move the bot’s springy, four or six legs up and down, propelling the bot forward. Since it only responds to a perfect pitch, the robot won’t move due to random sounds in the environment.

Current prototypes respond to vibration frequencies depending on how the bots are configured. At only two millimeters long, the tiny 3D printed robots can move four times their own length per second. The amplitude of the vibrations controls the speed of the micro-bristle bot.

The Future of the Micro-Bristle Bot

Steering function may also soon be added to the 3D printed robot. Adding two slightly different micro-bristle bots together could allow them to respond to different frequencies and amplitudes. Complex software could be used to make the right sounds at the right moments to control an entire swarm of micro-bristle bots or an individual bot when needed.

The bot’s actuators can be used to generate electricity when vibrated. This could allow future versions of the bots to power onboard sensors when actuated by external vibrations. Future versions could be used as environmental sensors, and they could even find their way into the human body to repair tissue damage.

Eventually, the 3D printed bots could be printed in a miniaturized form, existing. on the microscopic scale. They’d be able to live under our skin with enhanced steering capabilities, perhaps fixing damage on a cellular level. Micro-bristle bots are small, fast, and need no battery to operate. This makes them especially well-suited for use in the human body.