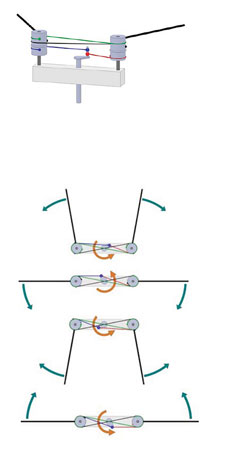 The Nano Hummingbird (Figure 1) is a miniature aircraft developed under the Nano Air Vehicle (NAV) program funded through the Defense Advanced Research Projects Agency (DARPA). DARPA was established to prevent strategic surprise from negatively impacting U.S. national security and to create strategic surprise for W.S. adversaries by maintaining the technological superiority of the U.S. military. The agency relies on diverse performers to apply multi-disciplinary approaches to advance knowledge through basic research, and create innovative technologies that address current practical problems through applied research.

For the Nano Hummingbird project, technical goals for the effort were set out by DARPA as flight test milestones for the aircraft to achieve by the end of the contract effort. The Nano Hummingbird met all – and exceeded many – of the milestones (see sidebar), even though the goal was never to replicate a hummingbird exactly, but to learn from its remarkable flying qualities, and then develop an aircraft that would look, fly, and sound as much like a real hummingbird as possible.

Over ninety percent of the design and fabrication of the aircraft and its support systems was completed by AeroVironment Inc. (Monrovia, CA). The aim of the project was to use as many off-the-shelf components as possible. The challenge for the completed project was to provide controlled precision hovering and fast forward flight using a two-wing, flapping-wing craft that also carried its energy source and a video camera as payload.

To this stage of the project, the Nano Hummingbird is capable of climbing and descending vertically, flying sideways left and right, flying forward and backward, as well as rotating clockwise and counterclockwise, all while under remote control. The prototype is handmade and has a wingspan of 16 cm (6.5-in) tip-to-tip, and a total flying weight of 19 grams (2/3 ounce), which is less than the weight of a common AA battery.

The prototype includes all the systems required for flight: batteries, motors, communications systems, and video camera. It can also be fitted with a removable body fairing, which is shaped to look like a real hummingbird. Even though the aircraft is larger and heavier than an average hummingbird, it is still smaller and lighter than the largest hummingbird currently found in nature.

The typical flight endurance of the final Nano Hummingbird is between five and eleven minutes, depending on how the aircraft is outfitted with batteries and payload. It is expected that with planned weight reductions and system efficiency improvements that the flight endurance could effectively double.

The hummingbird has an onboard stability and control system that allows seamless and simple remote piloting of hover flight to fast forward flight. It is configured with a micro, color video camera that transmits continuous real-time video to the pilot operator during the flight and is displayed on a small LCD screen on the hand control unit. In the future, AeroVironment plans to develop collision avoidance capabilities to allow for semi-autonomous indoor flying, video aided navigation; GPS aided navigation, and long range communications.

Significant effort was spent miniaturizing the flapping and control mechanisms while maintaining stiffness and precision. Flapping wing designs are heavily influenced by the unsteady aspects of the flapping motion, both structurally and aerodynamically. A large number of possible degrees of freedom in the kinematics of the system made the design problem a complicated one. Nonetheless, based on earlier ornithopter wing design research, a flexible membrane was ultimately used, which allowed the wing to passively deform, since active control of wing shape was infeasible.

Quantitative analysis of the wings was based around the metric of thrust per motor shaft power, as mechanism power consumption is not readily separable from the aerodynamic power. So, shaft power was converted from motor input voltage and current using well-tested model of the drive motor, which was manufactured by maxon precision motors (Fall River, MA). Generally the names of
vendors and component part numbers are held as confidential, but according to Matthew Keenon, Nano Air Vehicle Project Manager, “We can say that the main propulsion motor was supplied as a stock part from maxon precision motors, we just can’t say which model was selected at this time.”

maxon motors provides its customers with a complete line of DC brushed and DC brushless motors to choose from. What makes them unique is their ability to provide a non-cogging brushless DC motor down to less than 6 mm long. Because their motors offer high torque to speed ratios, and low-power versions, they are ideal for unique applications in fields from medical and aerospace to robotics and consumer products. Their motors were used in the Nano Hummingbird for their efficiency and longevity, among other key characteristics.

The final string-based flapping mechanism uses a continuously rotating crankshaft driven by the maxon motor. The pin on the crankshaft (Figure 2 a and b) is attached to two strings, each connected to two pulleys that are mounted on the wing hinge flapping axes. When the motor turns the crankshaft, the pulleys oscillate. Two additional strings connected to the pulleys keeps them (and the wings) matched in phase. This design helped to minimize vibration and maximize thrust.

In all, the Nano Hummingbird is a successful project that is continually under adjustment and innovation. AeroVironment has been involved in the project since its inception, and is excited about the advances made in this technology.