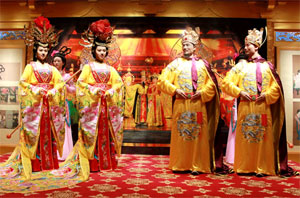 Imagine you enter a room and see a twin in front of you. It is not made of flesh and blood, but the humanoid robot already bears an uncanny resemblance to its human counterpart. In China, this scenario is no longer science fiction, it is reality. The lifelike artworks can blink, nod and move their arms and legs—thanks to drives made by maxon motor. A perfect interplay of technology and art.

The Chinese technology company Xi’an Chaoren Robots has mastered the art of combining a human appearance with the technical features of a robot, with fascinating attention to detail. The true-to-life exterior of the robot is modeled after humans. Even the hair on its head and its eyebrows are made of human hair and is painstakingly applied by hand. The elastic exterior of the android is made of silicone and feels al-most like human skin. "With the lifelike appearance of the robot, we want to convey a human touch instead of portraying a cold machine as is the case with most other humanoid robots," says Zou Ziting, General Manager of Xi’an Chaoren Robots.

And it really is almost uncanny when the robotic twin of Zou Ren Ti hardly differs from its real-life human counterpart. This robot is part of the first generation of lifelike robots. Seven years ago, the company based in Xi'an, the capital of the Shaanxi province in China, started to develop humanoid robots. The company has been marketing them since 2006. In the same year, Xi’an Chaoren Robots won the "Robot of the year" award of Time Magazine. Today numerous of the company's androids are used at a wide range of events. For example, they can explain and present products to visitors of trade fairs and exhibitions. Today many museums, including the National Museum of China, are among the customers of the robot manufacturer. And even the Chinese TV station CCTV (China Central Television) has already ordered a robot double for nationally known TV presenter Li Yong. In the near future, the robots are to be equipped for tasks at home—for example as nanny, service robot or as nurses.

Each robot is unique
However, first the robot has to learn to walk, because currently its movements are still limited to basic functions. It can, for example, move its head in all directions. With its eyes, it can blink and look in different directions. Movements of the arms, wrists, legs and feet are also possible – for example, the robot is capable of waving to the public or tapping its foot. It also does not lack verbal skills. It's mouth can move and talk by means of a remote control. Around six months is needed to complete a robot. Each robot is unique and has its own movement characteristics.

Blinking and waving thanks to maxon motors
Small, powerful motors are an important criterion for the life span of the robots. Zou Ziting explains that Xi’an Chaoren Robots chose motors manufactured by maxon as drive technology, as they are small yet highly efficient. In total, 16 brushless motors from maxon motor are used for the third generation of robots made by Xi’an Chaoren Robots. For example, the robot twin of the Chinese TV-presenter Li Yong is equipped exclusively with motors by maxon.

The precision motors have a diameter of 16 to 40 mm. One of the motors used is the EC-i40 flat motor combined with the GP 32 C planetary gearhead. This drive combination is responsible for the movement of the robot arms. For the planetary gearhead, the company chose the version with ceramic axes, as much higher torques can be achieved than is the case with steel axes and the wear-resistance of the ceramic axes are much higher than that of steel axes. Like the android called Hubo, manufactured by the Korea Advanced Institute of Science and Technology, the humanoid robots from China are equipped with the energy-efficient, dynamic maxon EC-4pole drive. Thanks to a rotor with two pole pairs, this drive can achieve a very high power density. With the powerful 120 W of the EC-4pole 22, the robot can take a bow on command. Motors manufactured by maxon also control the movements of the eyes, eyelids and mouth.

In the near future, the "human" robots will get even more intelligent with the aid of maxon's motors. In addition to human facial expressions, the robots will soon take their first steps and react to spoken commands.

Get Started with Machine Shop Automation