At BlueBotics we help companies meet the challenge of vehicle automation. We provide the navigation technology and expert support they need to bring their AGV, automated forklift or mobile robot successfully to market.

BlueBotics has been ranked one of the top three vendors of industrial robotics for material handling globally in the latest competitive ranking by ABI Research.

BlueBotics was ranked as a “Top Implementer” and a company that “takes a flexible and practical approach to deployment, offering specialized robots, retrofits, and long-term consulting projects with major OEMs to develop the best robot for the job.” 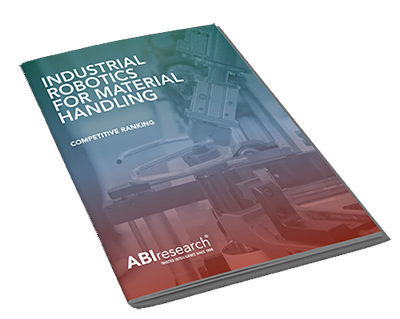 Rian Whitton, ABI Research, said: “In terms of funding from venture capital and corporate investment, the American market is seen as dominant in the mobile material handling space. But with their 2,500 installed base and a pedigree stretching back to 2001, BlueBotics SA is a testament to the immense importance of European companies in shaping the AGV and AMR market of the future. As a technology vendor, BlueBotics automates hardware from a wide network of original equipment manufacturers, enabling anything from scrubbers to pallet stackers. Their rollout, breadth of form-factors, and high-profile partnerships with major industrial players like Toyota put them at the center of automated material handling.”

The study assessed and compared ten major AMR and AGV developers, however BlueBotics was noted as, more than any other company, as having, “automated a huge variety of vehicles that are applicable across the entirety of the material handling market.”

Dr. Nicola Tomatis, CEO of BlueBotics, said, “We are delighted to be named as one of the top three industrial robotics suppliers in the material handling space. This ranking reflects both the flexibility and robustness of our ANT® natural feature navigation technology, and the expertise and dedication of our team, which is firmly focused on close customer support, including on-site when possible. It is this combination of factors that has led to over 2,500 ANT® driven vehicles now being in operation worldwide across more than 1,000 end customer sites.”

The report also notes BlueBotics for its competitiveness across multiple sectors; from intralogistics and manufacturing to industrial cleaning, with the company having assisted in the development of numerous types of client AGV, AMR and automated forklift.

The full report by ABI Research is available for purchase here.

Tips and Tricks for Motoman Robots