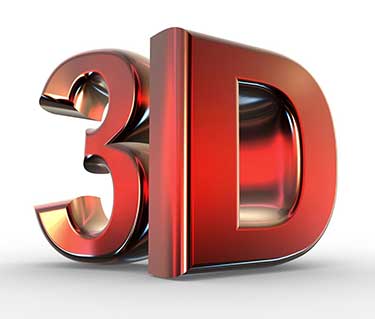 3D Imaging is Inspired by the Most Complex Imaging Device: The Eye

3D imaging relies on stereography, which we can observe from a familiar source: The human vision system. Humans see things with two eyes set slightly apart. This allows them to perceive depth in addition to the horizontal and vertical information reproduced by, for example, the standard 2D television screen.

Since the eyes are separated, each one sees the world from a different angle. Rapidly covering one eye, then the other, demonstrates subtle but distinct differences in angle each time. The dimensionality that humans perceive in their vision comes from the brain combining disparate images into a whole – a phenomenon called parallax.

Two lenses are used in every 3D shot – each captures an image slightly offset from the other. As a result, 3D images contain twice as much information as 2D ones. The images are edited to display while maintaining full data fidelity. The eye cannot process both sets of images on its own: Each eye processes its own set of images.

The left-hand and right-hand images combine in the brain to reproduce the sense of depth.

How is 3D Imaging Implemented?

3D imaging can be used for a wide range of applications – analyzing, measuring, and positioning parts are among the most important. To get the best results possible, however, it’s crucial to design a system with the necessary performance and environmental constraints in mind.

3D imaging can be achieved through active or passive methods. Active systems use methods like time-of-flight, structured light, and interferometry, which generally require a high degree of control in the filming environment. Passive methods include depth from focus and light field.

In snapshot-based methods, the difference between two snapshots captured at the same time is used to calculate the distance to objects – this is called passive stereo imaging. It can be achieved by moving a single camera, but using two cameras with identical specifications is more efficient.

By contrast, active snapshot methods can incorporate additional technologies that interpret visual data. Active snapshots might use time-of-flight, encoding 3D data into each pixel by measuring the time that elapses as light travels to the target object and then returns to a sensor.

Another successful method for producing 3D shape data is laser triangulation. In laser triangulation, a single camera is used to derive height variations from laser patterns projected onto the surface of an object, then observes how those patterns move when viewed from an angle with a camera. Even with a single camera and without triangulation, perception of object distance is still possible by observing how the object scales as it moves near or far from a camera.

3D imaging can also be implemented in other ways depending on the project and technology available.

No matter the approach, the result is robust visual data that can be applied to enhance performance of key processes, especially in industry.