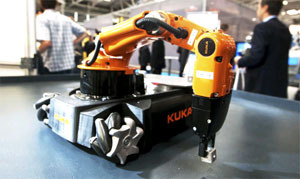 The KUKA youBot is a small mobile robot that has been designed as an open source platform for scientific research and training. The robot consists of a mobile platform and a robotic arm. Both of these components are driven by drive systems from maxon motor.

For robotic students, teaching a robot something step-by-step and discussing the programs they've written themselves can be a fascinating learning opportunity and an exciting challenge. The Augsburg-based company KUKA developed the youBot robot with that in mind (support of scientific research and training). The mobile manipulator, which is controlled with open source software, has an omnidirectional base and robotic mechanics with five degrees of freedom. Just two years after its introduction to the market, it is already the reference platform for research and training in the field of mobile manipulation. Worldwide, KUKA is primarily known as a manufacturer of industrial robots. With the youBot robot, KUKA has created an open source reference platform for robotics research, enabling developers, researchers and students to write their own control and application software. For example, assembling IKEA tables or transporting small load carriers and components in the “factory of the future.”

The KUKA youBot consists of a chassis, which can be moved omnidirectionally, with either one or two robotic arms mounted on the chassis. An industrial PC and battery have been integrated into the chassis. Via EtherCAT, the industrial PC communicates in realtime (1 ms cycle) with its nine drives, which can be operated with current control, velocity control, and position control. The robotic platform and arm can also be used independently from each other. The youBot chassis is only 53 cm long, 36 cm wide and approximately 11 cm high and moves on four Mecanum wheels. These special wheels have rolls mounted around the circumference at a 45°angle to the wheel's plane and enable the youBot to combine any translational and rotational movements at any given time. This makes omnidirectional motion possible, including sideways and diagonal motion.

The robot's arm is approximately 66 cm long and is mounted on the platform. A two-finger gripper at the end of the arm allows the robot to move objects of up to 70 mm in length and with a weight of up to 500 g. The robotic arm consists of five joints – each driven by maxon drive systems. In this application, motor-gearhead-encoder combinations from maxon motor are put to use.

Specially developed planetary gearhead for maximum freedom of movement
The available space in the youBot is limited, yet several motors and planetary gearheads have to fit into the arm and chassis. The solution was to integrate these components directly into the joints of the robotic arm. maxon and KUKA worked jointly to develop a very light, precise and robust special drive that allows the joint to rotate around the planetary gearhead.

For the joints of the robotic arm, a total of five brushless maxon flat motors (EC45 flat, EC32 flat) are used in combination with special gearheads and encoders. Four brushless EC 45 flat motors from maxon motor are used for the platform. The brushless maxon EC 45 flat has a simple design with high torque resistance in a compact frame. Despite their light weight of 46 g to 110 g, the flat motors have an output power of 15 to 50 W. For the measurement of the joint angles, the joints of the robotic arm are connected to maxon position encoders.

The KUKA youBot, still in its infancy stage can already be described as a milestone in robotics research and development. With this new approach, KUKA has addressed the research market and reaches out to the robotics community to support technology transfer. The robot's Linux-based open-source concept gives researchers and scientists the freedom to experiment without limits.

“driven” explains the factory of the future