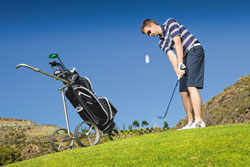 Golf is becoming increasingly popular and has become a common recreational sport. In the spring and summer millions of people around the world head to the greens to work on their handicap or to just enjoy the game. A golf caddy is an indispensable companion. Motorized versions are particularly helpful.

The distances between holes can be far. The world's largest golf resort "Mission Hills" with 216 holes (Mission Hills Club) is in Shenzhen in China, near Hong Kong. But there are even more extreme examples. In the Australian outback in the Nullarbor desert there is a very unusual "golf course": Between the first and 18th holes lies a distance of some 1365 kilometers and on average, 80 kilometers must be traversed between the individual fairways. With these record distances "Nullarbor Links" is the longest golf course in the world. A motorized golf caddy makes golfing that much easier, even on historic golfing courses such as Crans-Montana in Switzerland.

Even when you don't have to go on a mile-long walk to the next fairway, a motorized golf caddy can help you transport your golf bags. With a set of golf clubs, the bags get heavy fast. Electrical caddies are also developed and produced by the company Jutec in the German city of Limburg an der Lahn. Since 1980, the German company has been developing and producing tube bending systems, which are used in industry and handcraft throughout the world. Since the end of the 80s, company founder Werner Jungmann, himself an enthusiastic golfer, has been producing small, elegant and collapsible golf caddies with a 3-spoke wheel. Based on this product, the first electrical caddy was developed, made out of stainless steel, in the original JuCad design, with motors hidden from sight. The small battery system is also hidden in the rear of the golf bag. In 2003 the company was a pioneer in the use of the rechargeable lithium battery technology in the electrical caddy sector. Since then, the technology has established itself in the electric caddy market. Since 2008, the company produces the caddies in the JuCad design as well as out of modern, high-strength carbon composites.

The best example is the "Carbon Drive" caddy, which consists of a full carbon-composite frame and is a lightweight among the electric caddies at only 5.5 kilograms. Nonetheless, there is no weight limit for the golf bag for this model. And after your round of golf is over, the caddy can be quickly and easily disassembled for transport.

Not only carbon materials are used for light electrical caddies. JuCad uses the noble, high-grade material titanium, which is also a very low-weight material. The "JuCad Drive SL Travel eX2" is made of titanium and weighs less than 5 kilograms in the two-wheel version. This is accomplished by further reducing the size of the motor axles, among other measures. This allows the caddy to be as narrow as a caddy with no motor and with its specially developed high-power motors it has plenty of power for any golf course. All JuCad electrical caddy models have a free-wheel, automatic forward function (distances of 10-20-30 m) and an electronic motor brake (speed control). The motors are supplied with power by the integrated, high-performance lithium batteries.

Powerful motors for quiet performance
Since the beginning of its development of motorized golf caddies, JuCad has used motors from maxon motor. The powerful traction drive demonstrates its strengths even on mountainous golf courses. It is of course important that these motors are very quiet while also being precise. The power density and the efficiency of the motors also play a key role. The energy-efficient RE DC motors from maxon motor fulfill all these requirements. The maxon RE35 motor used has an efficiency of about 90 percent. RE motors are equipped with powerful permanent magnets and have an ironless winding system, which ensures smooth operation with low cogging torque. Two maxon motors in the axle of the JuCad electrical caddy provide the drive function. A brief turn on the variable throttle grip is enough to start the caddy moving. For the smoothest, quietest operation possible, the shaft of the motors were geared specifically for this customized application.

The motorized caddy is a wonderful aid for many golfers, allowing them to save their energy for the game. In addition, a remote control can make it even easier for the golfer to move the JuCad golf caddy around. This makes it possible for the golfer to fully concentrate on the course and their next shot.