The need for unmanned security has reached a point that goes beyond stationary cameras and alarm systems. This has resulted in numerous companies developing security robots that offer greater motion and, therefore, greater capabilities to provide security to the general public. Each new system offers its own benefits and drawbacks based on its design. The ability to operate over any terrain appears to be a major factor. American Unmanned Systems (Stamford, CT) and its 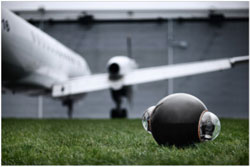 sister company GuardBot Inc are engaged in the design, development, and production of unmanned systems, including vertical takeoff and landing (VTOL) unmanned vehicle technology. For this reason, American Unmanned Systems was the right company to research and develop a security robot unlike any other.

The company’s Guardbot is a robotic mobile platform that not only hosts cameras to feed back live images, but also includes ports for other sensors to feed back information and data of all types. The unit incorporates two HD cameras that are gimbal mounted for free and stabilized movement inside the device housing. Each camera can rotate a full 360 degrees, and offers pan and tilt movement of 180 degrees. The Guardbot can also carry audio, EO/IR, radar, or broadcasting equipment as part of its payload. Motion is accomplished through the use of a direct drive mechanism that is controlled from an operators control unit or other remote device.

As a mobile sensor platform, the Guardbot combines land and water functionality with dual payload capability (two data streams). The Guardbot system is designed for non-intrusive surveillance enabling inspection as well as identification of objects. The patented drive-mechanism uses a motorized pendulum to propel the Guardbot by changing the center of gravity for back and forth movement as well as 360-degree turns. Acceleration and deceleration are fast and smooth on land. Amphibious movement is consistent an observant. Guardbot moves discretely and can sleep until alerted for duty. 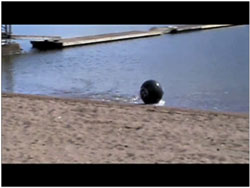 American Unmanned’s Guardbot system is shaped like a ball and stands about 22-inches high. The Guardbot’s spherical shape is formed by molding a fiberglass shell, then assembling all parts including domes together as a single, sealed unit. The two cameras incorporated into the design are mounted on opposite sides of the Guardbot, and are sealed as well through the use of a transparent polycarbonate plastic covering. The main surface of the ball is wrapped in vulcanized rubber with molded-in studs for easy gripping of any surface. Because the entire Guardbot system is sealed and waterproof, it can be used in any weather, and can float over water as easily as it moves over land.

The Guardbot system is able to be controlled remotely, by hand, or programmed to navigate through a GPS signal. In this way, the unit can be programmed for perimeter checking as well as for complex moves within a larger area, such as an airport flight line. The Guardbot’s augmented reality user interface is highly intuitive, and boosts operator alertness to ensure full control. Using the systems ground control station, a user has available a 2D/3D motion planning feature as well as moving map displays.

Guardbot weighs approximately 57 pounds depending on its payload. It has a twenty-two degree climb capability, and can travel through snow, over sand and mud, and float or swim in water at nearly seven miles per hour without making a sound. Guardbot is battery operated, and will run between eight and sixteen hours per charge, depending on the mission profile and payload. 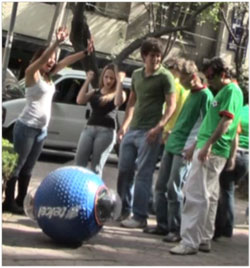 Guardbot attains its motion through the use of a patented drive-mechanism. Basically, the drive is produced using a motorized pendulum to propel the unit by changing its center of gravity. This allows it to easily provide forward and backward operation as well as make 360-degree turns. The unit is designed for non-intrusive surveillance, providing inspection and identification. It accelerates and decelerates quickly and smoothly on land, while amphibious movement is consistent.

The Guardbot incorporates two dynamic DC brushless motors manufactured by maxon motor. The motors provide the 6.2 Nm torque specifications needed for easy acceleration and deceleration of the Guardbot. Permissible torques run as high as 23 Nm. For this application, motors are being operated from a 48 VDC EaglePicher battery pack. Feedback control of the motors is used for accuracy. According to Peter Muhlrad, President of American Unmanned Systems, “The motors are the most critical components of the Guardbot. That’s what allows it to move the way it does.” Each motor is also connected to a planetary gearhead and rotary encoder feedback system manufactured by maxon motor.

Guardbot has been designed for a variety of highly sensitive applications including airfield and warehouse surveillance, aircraft inspection, laser and RF detection, and harbor and ship patrol. Many of these high-security operations are not well protected using only stationary cameras. Dependent on the sensors used inside the Guardbot, it can also perform smoke and fire detection, hazmat/chemical detection, radiation detection, audio surveillance, and much more.

American Unmanned Systems is presently testing and evaluating an underwater version of the Guardbot. Other sized models are also under test, including a half-sized model that’s 11-inches high, and a large unit over three yards high that will offer higher speeds and a more robust construction for higher payloads.

Taking to the High Skies with maxon motors