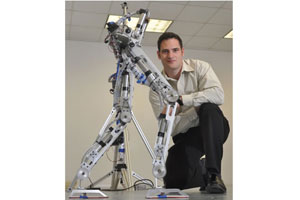 In the world of robotics engineering there are two primary ways to view how a robot walks. Either the robot has to be quasi-statically stable at every moment of movement, or it can walk like a human in a more dynamic manner, where if it stopped half-way through a step it would fall over. The real trick has always been keeping a dynamically walking robot upright.

Assistant Professor Dr. Aaron Ames, at the A&M Bipedal Experimental Robotics Lab (AMBER), heads a team of students in the design, simulation, and fabrication of a robot that will walk like a human. The AMBER 2 is an important project. Making a human-like bipedal walking robot will advance robotics beyond that of toys or novelty, and into the area of high-level use for a variety of applications including space exploration, disaster response, military operations, elderly assistance, rehabilitation, and prosthetics.

Most robots being built today use what is called a quasi-static locomotion method, or the ZMP (Zero Moment Point) technique of walking. This type of operation essentially means that no (or zero) moment (inertia) in the horizontal direction is present at the “point” where the foot hits the ground. If the robot is stopped mid-stride it continues to stand. This is not a human-like walk. If we were to be stopped mid-stride, we’d fall over. The Texas A&M team found that by using voltage-based controllers their walking method could be more dynamic in nature, as feedback could be more easily incorporated into the design.

According to Dr. Ames, “The first goal to overcome is how to mathematically model such a highly dynamic system, and then how to fabricate the controllers and other hardware to do what you want. Similar to what we chose to do with our first robot, we decided to create our next generation, AMBER 2 robot, from the ground up. The process included the initial CAD designs using SolidWorks renderings, through mathematical analysis using Wolfram Mathmatica, to simulation and controller design using MathWorks’ Matlab, and finally using National Instruments’ LabView for upper level control of the final design.”

Everything in the design had to be thoroughly thought through, analyzed using computers, and then ordered. “We couldn’t ball-park any of our figures,” Aaron said, “particularly for the mechanical operations of the robotic legs.” The team found that they would need to use motors and gearheads that could deliver torques between eight and twelve Newton-meters and speeds down to five to six radians per second. “At such low speeds, we were specifically concerned about cogging problems getting in the way of smooth operation,” Aaron said.

The team decided to use maxon motors for their final robot design. “One important factor that we discovered along the way was that maxon’s motor spec sheets were accurate (not all spec sheet are), which meant that we knew what we were getting when we ordered from maxon,” he said. The AMBER 2 robot uses three motors and three right-angle gearheads per leg, one for each joint—ankle, knee, and hip. At first the team used the maxon motors along with another vendor’s right angle gearhead, but between high motor-to-gearhead torques, and inherent vibration due to misalignment and/or loose connections between components, the joints quickly failed. According to Dr. Ames, “We found that we needed a single, seamless package (see sidebar), which allowed us to maintain the tightest tolerances for the joint mechanisms.” When the robotic foot hits the ground, the motors have to reverse on impact, which causes a huge amount of torque on the motor.

AMBER 2 uses maxon’s brushless motors for their high performance. The motors are electronically commutated, which enables them to offer extremely long motor life— there are no mechanical brushes to wear out. Hall effect sensors are built into each motor in order to provide feedback to the control electronics. By assembling the motor such that the coils are outside the rotor, good heat dissipation and high overload capability is attained. Each motor has a stainless steel housing. Models vary in diameter and length dependent on the customer’s needs and selection—typically from 16 to 40 mm (0.63 to 1.57 in) diameters and 24 to 88 mm (0.94 to 3.46 in) lengths. Ambient temperature range is -40O to 100OC (-40O to 212OF).

Maxon motors use high-energy neodymium magnets, which results in a very responsive mechanical time constant of as low as 5 ms, while minimizing overall size. Using electronic commutation allows for minimum electrical noise. Motors are offered with several different windings to optimize desired speed with available voltage. A variety of accessories, such as gearheads, encoders, brakes, and control electronics are available to complement the motors.

For a number or reasons, the right angle joints make the robot operate in a more natural state. “We found that if we put the motor on the joint directly we encountered some odd mass distribution problems, whereas by using the right-angle motor/gearhead assemblies from maxon we didn’t see that happening. Plus, the assembly helped with the location of the proper center of gravity for the robot itself,” he said.

With the proper joint assemblies, the components acted in a very predictable manner, which was essential when creating the control interface. “You want everything to move exactly as the mathematics and control software dictates,” Aaron said. The assembly allowed for the high torque motor to operate smoothly at slow speeds. The team installed larger sprockets and a chain for each of the six joints. The idea was that the chain would become the weakest link—like tendons—and would be less expensive to replace.

The team is working toward surpassing the ability of wheeled robots, by focusing on collected data that shows that humans display a walking behavior that mirrors a mass-spring damper system, which is one of the simplest mechanical systems. They are now on the path to replicate that system by using a combination of motors and gearheads, along with proprietary electronics. Which means that the AMBER 2 robot is well on its way to being one of the first dynamically walking robots in the world.

The maxon Spiroid® gear design allows each right-angle gearhead to achieve maximum torque in a minimal amount of space. Not only is the gearhead mountable on a variety of maxon motors and gears, it is offered in several versions including a back-drivable (4:1 ratio) and non-back drivable (31:1 ratio), both with low backlash.

The units are compact and lightweight, offer extremely high torque, high stiffness/low deflection with large applied loads, are quiet to operate, and have absolute output shaft position achievable with encoder mounting options, which was important for the AMBER 2. These gearheads may be mounted directly onto brushed or brushless motors, or stacked on different ratios of the company’s planetary gearheads.

Ask an Engineer: Understanding Your Options in Corrosion Resistance