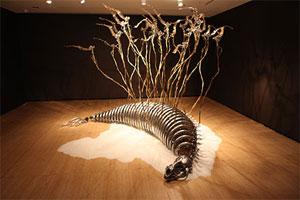 The kinetic sculptures of the Korean artist U-Ram Choe are composed of acrylic resin, stainless steel and moving elements, and have been fascinating people for two decades. To breathe life into his mythological creature “Custos Cavum,” the artist relies on maxon motors.

Each of U-Ram Choe's sculptures has its own mythology. These stories are just as important to the Korean artist as the works themselves. Thus the Custos Cavum, the “guardian of the hole,” has its own past life: Long ago, there were two worlds, connected by many small holes, as if the worlds were breathing through these holes. Yet the holes had the tendency to close. For this reason, there were guardians: seal-like creatures, which time and time again opened up the closing holes by gnawing at them with their large front teeth.

U-Ram Choe has created such a guardian and exhibited it many times – whereby only the skeleton of the mythical creature now remains. According to the artist, the reason the Custos Cava no longer exist is that with the passing of time people have ceased to believe in them. In spite of this, his specimen still breathes on; its large body rises and falls with a steady rhythm. Even the strands rising up from the skeleton move before the eyes of the observer. U-Ram Choe uses maxon electric motors to achieve this effect. These are brushed RE-max 17 motors which, combined with gearheads, are responsible for the gentle movements of the Custos Cavum. This aesthetic application requires the highest precision from the motors. The DC motors are in constant operation and must work reliably in order to make the mechanical fantasy creature come to life. Thanks to the ironless winding, these maxon drives achieve an efficiency of up to 90 percent. The Korean artist finds nothing more boring than motionless sculptures. Accordingly, all of his works are subject to motion in one form or another. U-Ram Choe was born in Seoul in 1970 and also studied art there. He now works with a team of specialists in order to change the vision of his highly complex works into reality. His gracefully moving sculptures are controlled by unique mechanical systems that are developed and programmed by U-Ram Choe himself.

The differences between Brushed and Brushless motors