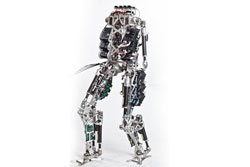 Agility, speed, strength, balance are all qualities needed to fight fires, especially when those fires are shipboard. Such feats are difficult for humans, let alone humanoid robots. But that’s just what the RoMeLa labs at Virginia Tech are working on.

According to Derek Lahr, PhD candidate and project manager, “The SAFFiR will be able to carry and operate fire extinguishers, fire hoses, throw PEAT (Propelled Extinguishing Agent Technology) canisters, as well as interact with humans and find fires.” Derek said, “We’ve already built the legs of the robot and are working on the rest of it.”

As shown, the legs are a highly compact amalgamation of motors, pulleys, wire harnesses, and controllers that not only allow the robot to walk, but to walk while on a ship in the ocean as it pitches and rolls through the waves. Key concerns while designing the SAFFiR included the need to control the robot’s locomotion from both a purely mechanical stance as well as from a balance standpoint. For example, if the ship pitches forward, the robot might need to speed its leg movement, but also produce a longer stride length to catch itself from getting off balance.

Derek explained that by using maxon precision motor’s EPOS controls, they were able to interconnect all operations easily. “For six degrees of freedom in each leg, we use six motors. That’s twelve motors being used in just the legs section of the SAFFiR.” Both speed and torque were necessary, since at different parts of a stride the leg will alternately move fast and free, and then slow and more controlled. Derek and his team uses multiple 30 mm maxon motors for the legs. Wherever possible they designed in 100 watt motors to help reduce the weight of the unit. The motors provide the largest amount of mass in the robot, so any reduction in weight was a plus. Derek explains, “maxon motors actually provide the highest power to weight ratio we could find in a brushless motor anywhere. And, humanoid robots can be more sensitive to weight than an airplane.”

For certain critical joints like those in the knees, 200 watt motors were used. The knees of the robot, just like human knees, take the brunt of the load, especially when squatting or kneeling. They also have to move the fastest while walking. Those joints needed the additional torque and speed combination available with the larger wattage units.

At this point in the design testing phase, the robot is tethered much of the time, but they have tested and confirmed the use of two 10 amp/hour lithium polymer batteries (about the size of a small brick) will be able to power the robot for at least a half hour with a twenty amp average current draw. This includes, of course, all the motors, sensors, and controls.

Because the robot operates off of a closed loop system, and uses twelve motors just in the legs (there will be another twelve in the arms and hands, as well as two in the neck), Derek and his team needed controllers that could handle the load. “We chose maxon’s EPOS 50/5 controllers for the joints, aside from two EPOS 24/5 controllers used for less demanding degrees of freedom,” he said.

One of the main reasons they chose to use the EPOS (Easy Positioning System) series controllers was that they came equipped to use the CANopen bus system. “Several of us were familiar with CANopen from other applications, so we were attracted by the familiar operating and programming needs of the system software from the beginning,” Derek said. This makes the EPOS embedded controllers well suited for multi-axis distributed control that also feature electronic gearing, PVT, step & direction, and point-to-point positioning.

The EPOS controls are used in two different modes, position control mode and force control mode. Position control allows for higher levels controllers to read position data from the sensors and closely regulate the specific position of the leg so that corrections can be incorporated while walking. Force control mode is the latest thing in locomotion, according to Derek. “It combines current control circuitry with load cell feedback to create a “pure force” actuator, which allows the leg to swing freely.”

“The EPOS controllers allow us to switch modes on-the-fly,” Derek said. This is important so that the leg impact doesn’t harm any of the actuators. “We can switch from position control to force control at the last millisecond so that we can accurately control stride length and impact power,” he said. An additional benefit of using the maxon controllers is that they come with EPOS Studio (a GUI based free software package provided by maxon), which provides a simple utility to program the controllers, plus helps the user to bug-check their software prior to implementing it into the CANopen system.

In general, EPOS controllers have been designed using advanced 32-bit DSP technology, which provides users like Derek and his team the extended functionality of a miniature embedded controller. The units were specifically developed to meet demanding size and performance requirements often found in robotic, medical, and semiconductor applications.

Overall, the SAFFiR is progressing well, the use of the lightest weight motors with the highest speed to torque ratios, the lightweight EPOS control units, and the unique ability to shift from position to force control on-the-fly are all making the design and test process run smoothly. Since the legs are the most complicated and difficult section to design, the team at Virginia Tech expects few complications going forward.