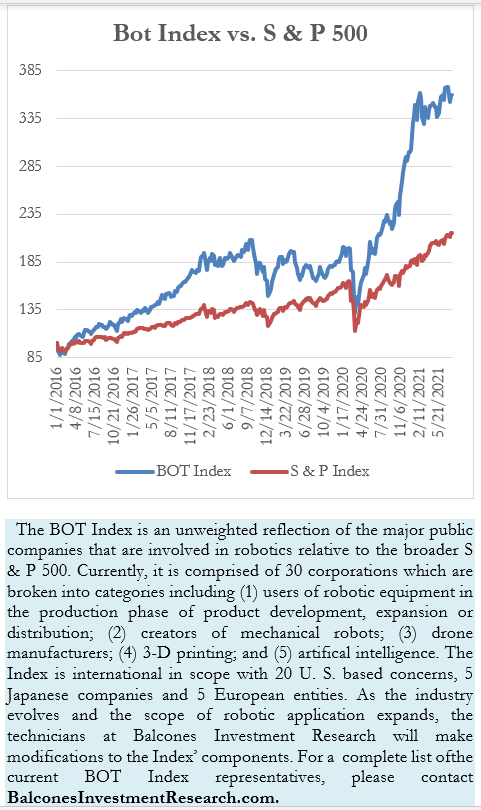 Bad revenue news from Amazon and PayPal together with a rising concern over the economic impact presented by the Covid-Delta variety led the broad market slightly lower last week. The S & P 500 was off 38 basis points while the Bot Index managed to eke out a 19-basis point increase.

The bots were led by Tesla’s 6.81% improvement as Elon Musk announced that he was declaring August 19th as AI Day. Not explaining what the event would reveal, investors, nonetheless, took it to mean a significant new step in the production or capabilities of his EV line. Much like previous, Battery Days, the AI day will produce interest by the legions of Tesla fans.

Historically volatile price movements by 3D Systems were again present in this week’s trading. Shares of the company rose 6.66% (usually a bad-omen number) following the announcement that the company was divesting its medical simulation business to a Swedish firm for $305 million. The transaction will allow the company to focus on its core business and leave the balance sheet with no debt and a $500 million cash kitty.

Elsewhere in the winner’s column were Keyence who rose 6.49%, Cognex gained 5.05% and AeroVironment up 4.88%. According to Zachs Investment Services, Cognex is expected to post quarterly earnings of $0.42 per share in its upcoming report, which represents a year-over-year change of +4300% while revenues are anticipated to be $263.11 million, up 55.6% from the year-ago quarter. AeroVironment’s increase was attributed to a new contract award of $15.9M for the Puma 3 AE, Raven Unmanned Aircraft Systems.

Hiwin Technologies declined 16.12% on significantly higher volume and Amazon fell 9% to lead the weaker components of the Bot Index. Amazon reported second-quarter adjusted EPS of $15.12, beating analyst estimates of $12.30. Revenue for the quarter was $113.0 billion, missing consensus forecasts of $115.2 billion. Revenue was up 27% from a year ago. 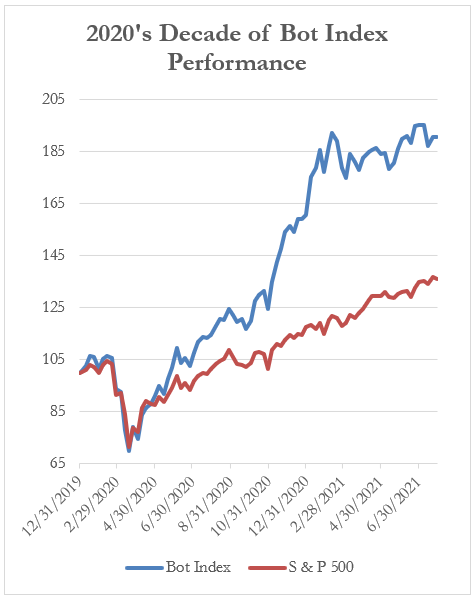 Who is the Welder of the Future?