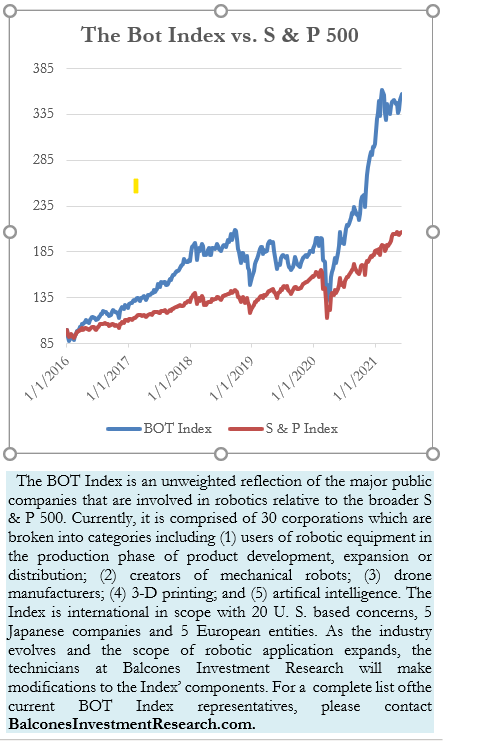 The effects of ‘beta’ did not disappoint over the past three weeks regarding the relative performance of the Bot Index to the broader averages. With the market’s more optimistic tone, the higher beta robotic stocks significantly exceeded the S & P 500’s performance. This week, the Bot Index recorded a 1.98% jump while the S & P rose around sixty-one basis points.

The bots were led by the spectacular 24% gain by Oceaneering International. The stock was propelled by comments from the CEO of Schlumberger who announced that the increase in oil prices would likely prompt more oil exploration. With recent Administration’s prohibition of energy exploration in Alaska’s Artic National Wildlife Refuge, together with the pandemic-recovery’s economic boom, oil prices have climbed to near $70 per barrel of West Texas Intermediate Crude. Since OII is an offshore production facilitator, the fortunes are proving positive for the company. In fact, the company is expected to post quarterly earnings of $0.05 per share in its upcoming report, which represents a year-over-year change of +135.7%. Revenues are expected to be $465.35 million, up 8.9% from the year-ago quarter.

Following prior week’s 13.39%, NIO Ltd.’s shares shot up another 8.60% this week. The company is benefitting from increasing interest in the electric vehicle industry and the fact that oil prices are on an upswing, further solidifies the practicality of the EV concept. In an OilPrice.com article entitled, Why EV Stocks Are Poised to Explode This Summer! the state of the industry’s fortunes is well explained by the billions of dollars flowing into transportation research.

The Chinese company is probably also benefitting from some of the recent woes of Tesla. In a recent report, Tesla’s April sales of locally made autos in China crashed 27% from March levels. The declines came on the heels of increasing criticism of Tesla's manufacturing quality from Chinese state-run media and allegations from the Chinese military that Tesla vehicles might be gathering sensitive data and sending it back to the United States.

The third best performance in the thirty-stock index was recorded by NVIDIA Corp. who rose 8.21%. The company has been a beneficiary of the chip shortage that has plagued the tech industry, however, this week the stock was advanced by a number of positive articles such as:

Nvidia Is Gaining on AMD in 1 Key Area. What It Means for the Stocks.  Barron’s

2 Reasons Why This Is One of the Hottest Growth Stocks to Buy Right Now.  The Motley Fool.

Among the weaker names (there were ten companies that were in negative territory for the week) TSLA turned in the poorest results. The stock fell 4.18% for the aforementioned reasons in the NIO commentary. Joining TSLA in the weaker group was Brooks Automation. While no news would account for the softness, perhaps investors noted the relatively sluggish quarterly earnings growth and found it difficult to account for the stock’s 79x P/E multiple. 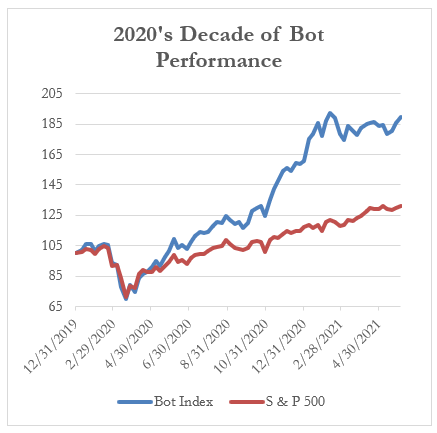 From Where Will the Energy of the Future Be Derived?

The Bot Brief has devoted several recent commentaries on the status of the various energy alternatives to fossil fuels. We have noted ammonia power, fuel cell technologies, hydrogen fusion and electrical batteries. In a recent announcement, Renault and Plug Power have created a partnership on a new hydrogen powerplant company entitled Hyvia.  The joint venture plans to begin building three types of fuel-cell vans at existing Renault plants in France by year’s end. The chassis will be consistent with Renault’s existing Master line of vans. Each company will contribute to the development cost, estimated to be around $79 million, with the hopes of having working models within the year.

Truly, the advent of alternative energy sources is rapidly approaching…good for the planet, good for innovation and good for investors!