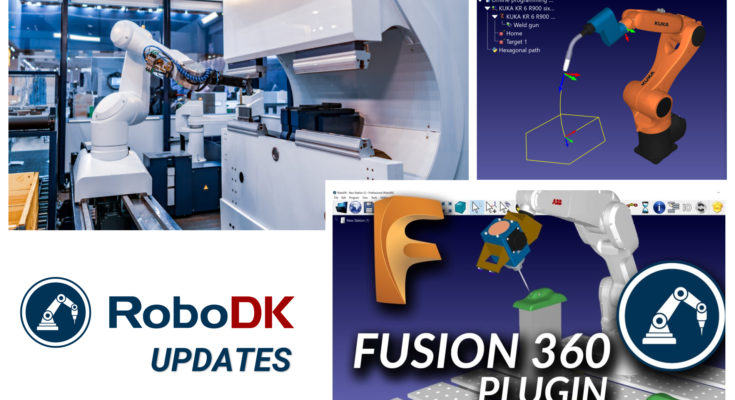 You might not realize, but we are constantly improving RoboDK. Our team is always working to make your robot programming experience better and easier.

Since the start of 2022, we’ve introduced a bunch of new RoboDK updates to the software that you might not have seen yet.

Some RoboDK updates have been huge. The announcement of our brand new RoboDK for Web is big enough that it had its own launch campaign.

But, we’ve also made plenty of smaller updates to RoboDK that will make your life just a little bit easier.

Here are 5 of the top new updates we’ve made recently, plus 9 smaller bonus updates…

1. Improvements to the Fusion 360 and Inventor Plugins

First up, we’ve been making some improvements to the plugins for Fusion 360 and Inventor. These changes bring the plugins up to date with the latest versions of these popular CAD/CAM packages from Autodesk.

Our plugins allow you to seamlessly integrate your product design workflow into your robot programming. They mean that you don’t even have to leave your favorite CAD/CAM environment to program the robot.

The RoboDK Robot Library is the hub of all the hundreds of robots that our software supports. It also includes an impressive selection of robot tools and accessories.

In the Robot Library, you can:

Until recently, the library was functional but it didn’t look as good as it could have. We have now updated the Robot Library and added some extra features to help you get even more from this tool.

Although RoboDK’s graphical interface is popular, a lot of customers use RoboDK via the API. This allows you to easily integrate robot programming into your own programs and code.

We have just restructured the whole Python API for the first time in years.

RoboDK Version 5.4.1 is mostly a restructuring of all our Python modules to prepare for future updates to the software (yes, there are many more exciting updates to RoboDK in the pipeline!).

The new changes are all backward compatible. This means you can keep your current Python scripts as-is for both past and future versions of RoboDK.

However, the changes will not be forward compatible. When you start to use the new semantics, your scripts will no longer work with previous versions of RoboDK.

We have also updated the Python documentation to reflect these new changes.

We have packed a lot of functionality into RoboDK. There are many features that you might not ever use personally, but that are vital for someone else’s robot setup. This is what makes RoboDK so flexible.

One way that you can add even more functionality to RoboDK is through the use of Apps and Plug-ins. The Plug-in Interface allows you to extend and customize RoboDK with your own code.

The App Loader makes this step even easier. With it, you can quickly load code into RoboDK as if it was a plug-in. This gives you the ability to add custom buttons and actions directly to the RoboDK interface.

We have recently improved the App Loader and some of the existing Apps.

Post-processors are at the heart of RoboDK. They convert your robot program into instructions that your robot model can understand and run.

We are constantly updating the post-processors to reflect changes made by robot manufacturers to their products.

Most recently, we have updated post-processors from:

We have also improved the default post-processor sample that comes with RoboDK. This will be helpful if you are creating your own post-processor from scratch for a custom robot type.

9 Other Small Upgrades We’ve Made Recently

There are plenty of other small upgrades and improvements that we have made to RoboDK since the start of 2022.

We’ve also made small improvements to these 9 aspects of RoboDK:

Finally, we have a small announcement if you are using an educational license. If you are on such a license, we will have already contacted you about this, but in case you missed it.

Since January 1st, 2022, educational licenses are now subscription-based. They have a fixed, automatic 30-day trial to bring them in line with other licenses.

If you have any questions about this, please get in touch.

Robot Orders Increase 67% in Q2 2021 Over Same Period in 2020, Showing Return to Pre-Pandemic Demand for Automation