Nanotechnology, the manipulation and assembly of tiny devices often not much larger than a group of molecules, is a perfect application for industrial robotics. Due to the fact the objects being handled are so small, a few billionths of a meter, it is impossible for a human to see or successfully fabricate anything from them, robotics are the primary means of working with  them.

‘‘The majority of parts that people are making that need to be assembled cannot get any smaller than a size that allows them to be picked up by people with steady hands and good eyesight with a decent pair of tweezers,’‘ says Dr. John Randall, Chief Technology Officer at Zyvex Corporation, a robotic systems integrator located in Richardson, Texas. Anything smaller than that, Randall says, needs powerful, flexible equipment such as robotics. 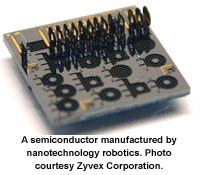 ‘‘Robos for Nanos’‘
Robotics for nanotechnology enables production in several types of items and operations. Some of these are recited by Craig Rubenstein, Sales Manager for Lifesciences at Motoman Inc., West Carrollton, Ohio. ‘‘Nano-positioning robotics are used in a variety of processes, including fiber optic component assembly,’‘ Rubenstein says. ‘‘Semiconductor assembly, testing and inspection use robots for nanotechnology production. Also nanotechnology robots are used in high-density pharmaceutical assay processes.’‘

John Randall of Zyvex says there are several applications of robotics in the nanotechnology sector. ‘‘Robotic nano-manipulators are integrated in high-powered scanning electron microscopes. These are used for research and in the integrated circuit market,’‘ Randall says. ‘‘Most major semiconductor makers now have such tools to measure individual transistors anywhere in the circuit.’‘ Randall continues by saying ‘‘Nanotechnology robots are used for manipulating contacts, which are 100 nanometers in length and getting smaller. Robot operators are able to position a finely etched tungsten probe on the metal contact to achieve good electrical contact. This has proven to be a good market for us.’‘ 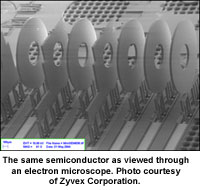 ‘‘Another application for robotics in nano-manipulation or assembly is pick and place operations for building optical systems, like spectrometers,’‘ Randall says. ‘‘Zyvex is pursuing the market for producing charged particle optics.’‘ Randall explains that a robot controls a very high-powered electron microscope that is used to get superior resolution.

‘‘Typically mass spectrometers are large and very expensive laboratory instruments. Using our nano-assembly approach, high-precision robotics are building miniaturized mass spectrometers,’‘ Randall says. Smaller mass spectrometers are deployed at airports for security. Randall briefly explained the procedure for baggage screening. ‘‘Airline security runs a cloth swab around luggage. The cloth is analyzed by the mass spectrometer for sniffing out explosives or biological weapons.’‘ A conventional mass spectrometer is too large to be installed in airports. Robotics with nanotechnology capabilities makes it possible to produce a scaled-down version.

The production of semiconductors and other tiny electronic would be impossible without the use of robotics that are able of working a nano-scale. Brian Carlisle, President of Precise Automation, LLC, Los Altos, California, points out that when working with small objects, robots deal with three different scales, miniature, micro, and nano. 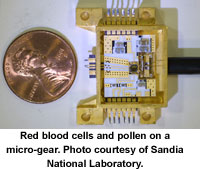 ‘‘Miniature robotic production consists of disk drives, cell phones, and photonics. Micro-assembly gets down into the level of sub-semiconductors, placing subassembly components onto the chip themselves, and applications where tolerances are within a micron,’‘ Carlisle says. Carlisle went on to say that nanotechnology robotics also gets into biological applications. ‘‘Nanotechnology robotics has expanded into biological systems, where companies are  manipulating cells within fluids,’‘ says Carlisle. ‘‘Biotechnology companies are injecting genes into cells. Nanotechnology space is on the molecular or even at atomic level.’‘ Carlisle added that nanotechnology has a role to play in material science.

Robotics are an important element in Micro-Electro-Mechanical System (MEMS) manufacturing which includes circuit board production as well as other nano-sized components. Carlisle elaborates on robotic MEMS by illustrating an example of accelerometer manufacturing. ‘‘MEMS robotics produces integrated accelerometers that are a component of air bags in cars. These tiny accelerometers have flexing beams and sensors to detect deceleration to deploy the air bag,’‘ Carlisle says. 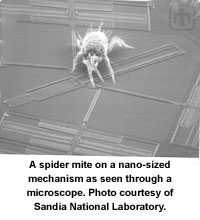 Other robotically produced MEMS products are used for medical applications, such as angioplasty. ‘‘There is the shrinking of surgical actuators, like for cleaning plaque from veins and arteries. Nano-sized motors are put on the end of a catheter that run through veins to vacuum out plaque,’‘ says Carlisle. ‘‘Other medical uses for MEMS products include a camera that can be swallowed within a pill to get an inside look at the digestive tract,’‘ Carlisle adds. This tiny camera facilitates examination of the intestines without the need for surgery or invasive techniques such as an endoscope tethered to a cable. Carlisle points out that the camera is a complete system that has a power supply as well as sensors.

Carlisle also speaks of probes to manipulate nano-sized objects. This is a scaled down version of what is often done with classical robots. ‘‘Robots are picking up and moving things around with a probe. These are laser tweezers, where two lasers are directed in a fluid, which affect the surface tension of the fluid to grasp or steer around cells,’‘ says Carlisle. ‘‘This is scaled-down robotic manipulation on a nano level.’‘

The Little Things That Count
Because the items that nano-robotics are manipulating are so infinitesimally tiny, the typical parameters for a work cell are different. Successfully implementing a robotic solution to nanotechnology applications poses a unique set of challenges to system integrators. Charles Duncheon, Executive Vice President for Sales and Marketing at Artificial Muscle, Inc., Menlo Park, California, points out some of the things that integrators and end-users of nanotechnology robotics need to keep in mind when implementing these systems. 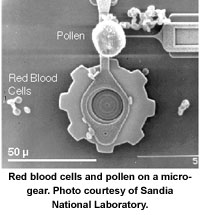 ‘‘There are a couple of things to deal with in nanotechnology robotics. One is getting the precision required, which is technically achievable,’‘ Duncheon says. ‘‘Another challenge is how to get the proper form factor to get those motions in a nano-environment,’‘ Duncheon adds. Duncheon maintains that these challenges are met by using the same technology as used in MEMS systems. ‘‘If you have a MEMS device, you can take that technology into a programmable robotic motion.’‘ Duncheon asserts that ‘‘Integrators cannot always use conventional electrical-magnetic motors and gear devices. When getting down to objects that small, you are battling laws of physics.’‘ Duncheon concludes by saying that standard industrial robots work well for spot welding of cars or material handling, but their form factor will not necessarily work in the nano world.

Motoman’s Craig Rubenstein has a different take on how traditional technology can be applied to nanotechnology robotic work cells. ‘‘Conventional robotics are not intended to provide nanometer-range positioning precision. Rather, they are useful for ‘gross’ positioning tasks over comparatively large operating ranges,’‘ Rubenstein says. ‘‘Supplementing gross positioning with fine-positioning solutions, such as piezoelectric stages is one strategy for meeting requirements for nano positioning over large areas. Another technique is use of machine vision to provide localized position updating, essentially reducing additive error that accumulates over large travel distances.’‘

John Randall of Zyvex believes it is important to match the size of the robot to the task at hand. ‘‘Typically, robots are not scaled nicely to deal with manipulation of things on a nano-scale.’‘ Randall stresses that closed-loop control in important when moving parts so small. ‘‘It is important to be able to know that the object you are moving has gone to the point intended. To do that, sensors tell the robot actuator to move a semiconductor wafer to a specific spot, but the sensor should also to tell you that the wafer actually moved to that place.’‘ Randall adds the force of gravity has relatively less affect on nano-sized objects. ‘‘When manipulating objects that are nanometers in length, you cannot necessarily rely on gravity to put things where you want them. Electrostatic forces at that scale are often stronger than gravity.’‘

Small Size, Big Future
‘‘In the next five years, as the volume of nanotechnology robotics increases, the cost will come down. Like any precision manufacturing process, there has been major investment. Until there is sufficient volume to amortize that investment there is not yet the cost-benefit,’‘ says Charles Duncheon, of Artificial Muscle. ‘‘In the next few years, the volumes will become sufficient and the investment to make these products will be spread over very large numbers of items and therefore will become cost-effective.’‘

Brian Carlisle of Precise Automation says, ‘‘The next five years will be in directed in developing better materials, controlling material fabrication at a much higher resolution than in the past,’ Carlisle predicts. ‘‘In five to ten years from now, we will see more of a higher level of integration of products, where we will see combining sensors, actuators, and power supplies.

John Randall of Zyvex has a rosy view of small things yet to come. ‘‘Products can operate that are a lot smaller than humans can manipulate. Manufacturers are afraid to make products any smaller because humans cannot handle them, Randall says. ‘‘Robotics come in by picking up and positioning parts that are a lot smaller than human hands can. This will lead to a new revolution in miniaturization, where things that have gotten very small can get a lot smaller. This could bring jobs back to the United States.’‘

For more information, you may contact any of the experts listed in this article or visit Robotics Online, Tech Papers: