Mobile Robots – Where Are They Going Now? 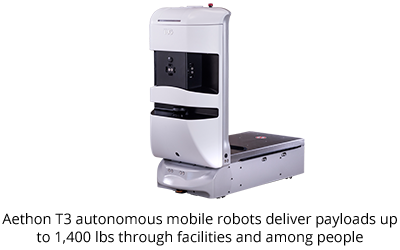 In warehouses, hospitals, and factories, mobile robots are doing tasks that can tax workers with repetitive stress injuries or fatigue. AMRs (Autonomous Mobile Robots) carry heavy loads in factories, deliver meals, medicine, and laundry in hospitals, and select and pick products off warehouse shelves for shipments. In some cases, AMRs can fill empty jobs that lack applicants, and in others, they work alongside humans. Robot makers are continuously incorporating better mapping systems into AMRs to create routes through the workplace, creating better sensors to protect people who work in the same space with AMRs, and finding optimal methods for recharging AMRs. Leaders who are creating new robots reflect here about what’s coming next.

New Hospitals and Hotels Plan on Robots
In hospital environments, Aethon’s TUG carries meals, medicine, and linens. Peter Seiff, senior vice president for Aethon, says, “When you’re operating a hospital, it’s a miniature city in a lot of ways.” The residents—patients—have a lot of needs. Aethon programs the TUGs to be personable and friendly when they meet people, using scripted phrases. The University of Pittsburg Medical Center uses 27 Aethon TUG robots. They work well around humans, as seen at this Halloween event.

Seiff hopes that architects and owners will plan for AMRs when they design new hospitals and hotels, creating designs that provide the best use of space for AMRs and humans. He says that as they employ robots, hospitals could eliminate laundry shoots and linen storage closets if AMRs like TUGs take away old linens and deliver fresh ones. In addition, there’d be a gain in floor space.

The TUG rarely needs human back up, but if it does, Aethon has a patented Cloud Command Center launched in 2006 that guides TUGs remotely and also updates software for the company’s 800 TUGs. Seiff says that the command center allows Aethon to address 97% of any issues with the robots remotely and without on-site support. 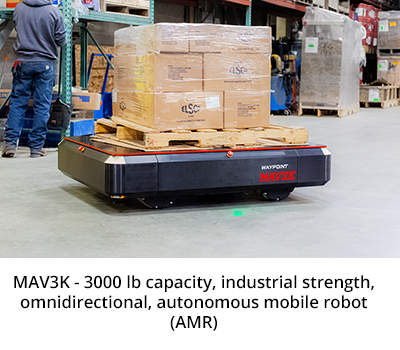 Worker Shortage? AMRs Are Ready
Jason Walker, the CEO and co-founder of Waypoint Robotics, believes that the need for AMRs is growing because employers can’t find enough workers to hire. Walker says, “Our value proposition is let’s take the people you’ve already got who you know and trust and love, and let’s give them better tools.” Waypoint’s AMRs are ready to work soon after they arrive on a loading dock and don’t need weeks of attention from engineers to get up to speed. They can drive through a factory once and make a map that will guide its future movements. Waypoint’s Vector, which has payloads of 300 pounds and 600 pounds, and MAV3K, which carries up to 3,000 pounds, both move materials efficiently. MAV3K can “move pallets and large material loads, and it’s great for mobile manipulation with really big arms” he says, but it’s not a forklift, and so it doesn’t work alone.

The future for AMRs involves heterogenous fleets of AMRs, Walker says. “We’ve built our systems so that they are easy to integrate and are interoperable with all kinds of third-party external systems.” He envisions AMRs from multiple manufacturers working together to complete jobs.

Walker says that he doesn’t know of another company using a charging method similar to Waypoint. Through a partnership with Wibotics, Waypoint has adopted a wireless charging method called EnZone which uses radio frequency at multiple sites within a workplace. “As long as you get the receiving antenna within about an inch of the transmitting antenna, it will charge at full power, and it will do it all day long.”

Waypoint is selling Enzone to other companies, he says. “The reason we want to do that is to create an ecosystem and a standard in the robotics community where we all use one type of wireless charging system. I’d rather create a bigger pie than hoard the piece I’ve got.” 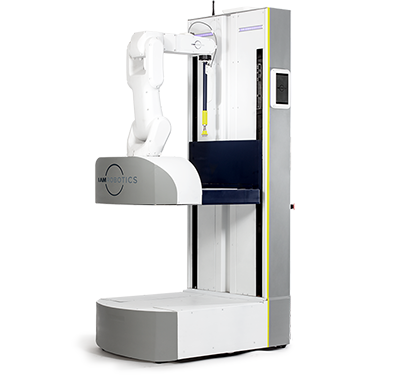 Future AMRs Will Build on Current Success, But More Slowly
Tom Galluzzo, the founder and chief technology officer of IAM Robotics, says that IAM focuses on helping companies to pick, pack, and ship longtail inventory in warehouses, that is, items stocked in small amounts. IAM’s AMR, Swift, locates merchandise, uses Flash to read the SKUs, grasps the package, and moves it. It is controlled by the Swift Link server, which integrates with the existing warehouse management server.

IAM Robotics’ first client was Rochester Drug, a large cooperative of pharmacies that needed automation to fulfill orders at night to be delivered the next day. Galluzzo says IAM Robotics is working “with everyone from fortune-five level retailers to two major health and beauty corporations that work internationally.”

Galluzzo expects that “as robots need to become more complex, there might be a slow down as far as implementing them.” With the current technology, AMRs have the potential to do up to 80% of the thinking, he says. “That frees up a person to do higher value critical thinking for operations.”

Robots Perform Better with Fast, Accurate Maps
Kaarta, founded in 2015, does one thing and does it well: Create 3-D maps quickly in real-time. Kevin Dowling, CEO, says, “We’re essentially answering two questions for robots. One is, What is around me? Which is the map. And then, where am I? Which is its location.” He says that customers use Kaarta software for AMRs in retail and factory environments. “We’re a thin part of the full stack but a very important part.” In addition, the company’s Contour software was used recently in the six-part National Geographic documentary series Buried Secrets of WWII.

Its other software, Stencil, is used for interiors. Examples of the results are here.

Some clients in the construction industry use a Kaarta device mounted to an AMR with legs to map difficult terrain. Data is uploaded to Kaarta’s cloud where it is processed. Kaarta can create a map for robots to use, or the software can be within the robot. 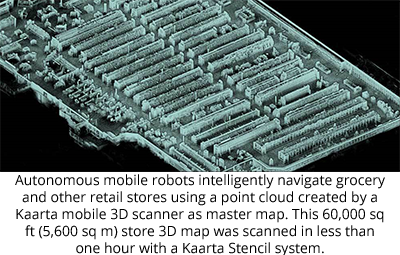 Remote Controls Will Keep Humans in Control
In 2018, Fort Robotics, formerly part of Humanistic Robotics, separated its operations to focus on refining and marketing remote safety controls for AMRs.

Daria Duda, the director of product marketing at Fort, says the company designed the Wireless E-Stop and Safe Remote Control System to prevent dangerous AMR interactions with humans. The company sells the controls in construction, agriculture, and warehousing markets. “There’s always going to be a need for a human to stay in control of automation or mobile robotic machine,” she says. The remote control technology can be within existing remotes or it can be a separate control.

As to Fort’s vision for the future, she says: “We want to keep things broad to gauge where the market is going and what industries are moving faster than others.”

AMR Advances Mean Better Machine Collaboration
Mobile robots have developed the ability to lift, carry, pick, pack, sense obstacles, and stop to avoid collision. Increasingly, mobile robots from different manufacturers work collaboratively to complete tasks, and developers continue to build on existing skills. As AMRs become more able, doing most of their own thinking, humans will continue to supervise them. Developers will build on existing strengths and improve robot collaboration.

UCLA to use RE2's HDMS Robot for EOD-related Haptics Research

Flexiv Has Closed The Series B+ Funding