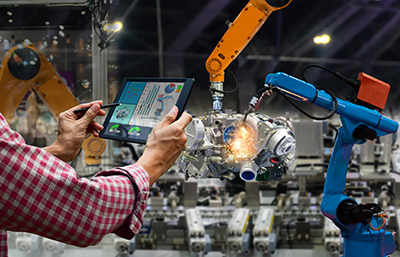 Making robots easier to train helps make automation more accessible to a wider range of industries. In businesses where industrial robots are new, it’s harder to find engineers and skilled human operators to train the robots. AI helps to simplify the training process. With AI infrastructures, a human can focus on what needs to be done, not how the robot needs to do it.

AI can train several robots at once, so less time is spent on training. This is especially helpful to industries experiencing labor shortages. It can be difficult for a human operator to show a robot how to move things the same way the operator would move them; AI technology lets the operator teach the robot more intuitively. With AI, it’s easier for an operator to track the robot’s learning than it previously was with conventional training methods.

In bin-picking, a robot is trained to pick objects out of a bin. This helps humans avoid tedious, time-consuming tasks like sorting bulk orders of parts. Through the use of simple annotations and sensor technology, AI reduces the training process needed to teach industrial robots to pick the correct objects out of a bin.

New AI-based tools let a human operator simply look at a photo of parts jumbled in a bin, and tap on a few examples of items to be picked up. In this AI process, the robot matches images of example parts with its vision sensors. Instead of developing complex rules, it’s as easy as showing a child how to sort toys.

You may also be interested in watching our free webinar about Robots, AI and the Modern Factory.