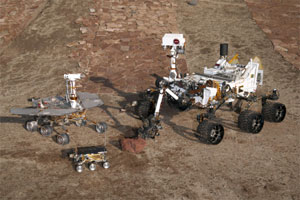 We did not find any little green men on Mars, but we did find dried out lakes and river beds. The NASA missions keep discovering new secrets of the red planet. Always on board: Reliable DC motors by Swiss drive specialist maxon motor.

Perhaps mankind will soon start its first colonies on Mars. They will mine the ground for ice, use it as drinking water, and plant vegetables in greenhouses. And when it gets dark, they will look at the night sky, towards Earth, where the foundation for their mission was laid long ago. An unrealistic scenario? Not at all. The research on Mars has advanced immensely in the past 20 years and precision drives by maxon motor have made an important contribution. In four missions by the US space authority NASA, products of the Swiss company reached the surface of Mars. The data collected over the course of these projects is bringing us closer an closer to the goal of a manned mission to our neighboring planet. maxon motor also gains important new insights with every flight: CEO Eugen Elmiger: “In space, our brushed and brushless DC motors are confronted with very harsh conditions – extreme cold, heat, impact, and vibration. We have been able to use this experience to improve our products on Earth many times.”

The historic breakthrough
Currently we are still sending robots on the long journey to Mars. They explore the barren landscape, investigate rock samples, and take breathtaking photos. The first of these was Sojourner, a rover with six wheels, which landed on July 4, 1997. It was a historic moment, as all previous attempts to send a vehicle to Mars have failed. Sojourner was small and weighed only 10.5 kilogram. For almost three months, it wandered across the sandy landscape and sent back images and data – much longer than planned. The vehicle was driven by electrical maxon DC motors. These high-quality drives with ironless windings were installed at the wheels and wereused for the steering as well as for the operation of the scientific equipment. For four years, maxon engineers worked with the NASA employees to make the project a reality. Its success fascinated the entire world. Since then, the terms “maxon&rdquo and “Mars” have been closely linked. Yet that was only the start.

The twins on the red planet
Driven by the success of the Sojourner mission, NASA soon started planning the next trip to Mars. This time, two identical rovers were to be sent up simultaneously: Spirit and Opportunity. They were significantly larger than their predecessors (around 185 kg) and equipped with more advanced technology. The rovers were able to take photos, brush and scrape rocks to reveal fresh surfaces for study. Their mission: Find evidence that there used to be water on Mars, and thus, maybe, even life. The two vehicles exceeded all expectations. Their expected service life was three months. However, six years passed before Spirit sent its last signal to Earth. Its brother Opportunity is still going strong even today, ten years later. Since the landing, it has traveled more than 40 km. Despite sand storms and temperature fluctuations from −120 to +25 degrees, the maxon DC motors are also still performing reliably. Each rover is equipped with 35 of these precision drives, which are responsible for driving the six wheels, the steering mechanism, the RAT (rock abrasion tool), the robotic arm, and the cameras. In addition, 8 maxon motors were used in the lander.

Opportunity's great birthday present
Opportunity is still a source of great joy to the scientists on Earth, even though it is starting to suffer from some old-age ailments. In January 2014, just in time for its ten-year anniversary, it found traces of water in the rock formations it was investigating at the Endeavour crater. In addition, the data shows that several billions of years ago, this was the site of a lake, possibly with good conditions to support organic life.

The hunt for the hidden ice
There is still ice on Mars, for example at the two polar caps. The researchers assumed that there is more ice in other regions – below the surface of Mars. Phoenix was sent to prove this theory. It landed on Mars in 2008. Unlike its predecessors, it was a stationary space probe. After just a short period, it provided the desired evidence. It used its arm to scrape away soil at the surface to reveal bright water ice below. This discovery made the maxon motor team in Sachseln jump with joy. Once more, the Swiss motor specialist had been a partner in the NASA mission and supplied nine RE series precision drives. These brushed motors with special ball bearings were used to deploy the solar panels on Phoenix.

A new star on Mars
The researchers could not and would not rest on their laurels. They embarked on a new, daring project and planned to send another rover to Mars. This one exceeded all previous dimensions. Curiosity, the new star in the rover squad, weighed 900 kg and had the size of a compact car. It landed on the red planet in August 2012. Equipped with a robotic arm that can drill and deliver samples to an onboard laboratory, it is on a constant quest to understand if Mars ever was capable of harboring life. Radionuclide batteries ensure a reliable energy supply. maxon MR encoders enable control of the motors in the ctromechanical joints. Since its landing, Curiosity has made quite a few tracks in the red sand and collected valuable data to provide the scientists with new knowledge about Mars. It discovered elements such as hydrogen, oxygen and carbon, the so-called building blocks of life, under the surface of Mars. This is a strong indication that our neighbor ing planet used to fulfill the prerequisites for life. Curiosity also shot landscape photos with such an impressive resolution that the viewer feels almost like he is standing on Mars himself. A feeling that could become reality in the near future: While there are still many obstacles to be overcome before the first manned flight can depart to Mars, the NASA rovers have already paved the way.

The Mars adventure continues!
ESA, the European Space Agency, is planning its own Mars mission in cooperation with the Russian agency Roscosmos. Under the name ExoMars, a probe will be launched towards our neighboring planet in 2016. A Mars rover is to follow two years later. It will be somewhat smaller than Curiosity, but it will come with a drilling unit that can retrieve rock samples from a depth of two meters. Samples will be analyzed directly in the rover. Once again, maxon motor is involved as mission partner and will supply precision drives from the DCX series for the ExoMars rover.

Over Rough and Smooth – Robots on a Mission to Explore