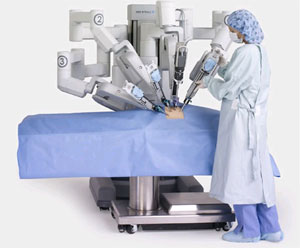 The latest, next generation surgeries are being performed today using Intuitive Surgical Inc.’s (Sunnyvale, CA) da Vinci™S HD Surgical System, which allows surgeons to perform the most minimally invasive procedures to date. The system incorporates the height of motion control technologies so that every motion provides the smooth, accurate movements reminiscent of a skilled surgeon – even at slow, calculated speeds.

The surgical system itself requires only the use of two 8- and one 12-mm wide hole in a patient, for insertion of the two surgical manipulators and a camera. Only the robot and surgical assistants stand over the patient, while the surgeon, the system operator, can be across the room at the Surgeon’s console where even the look and feel of the open surgery is duplicated with precision. The whole system consists of three distinct components, which includes the surgeon console, patient-side cart that holds the instruments, and the image processing equipment.The Surgeon Console is central to the ability of the da Vinci S HD to perform operations. Other attempts at performing surgery while using video proved difficult. The most prevalent challenge was that of directional reversals the surgeons had to deal with. Think of tying your shoes with chopsticks. When you move the chopsticks to the left, the tip moves to the right.

That’s the counter-intuitive movement that is experienced in traditional laparoscopic surgery. Through the use of the da Vinci S HD Surgical System, the surgeon is able to perform the operation while seated comfortably at a console viewing an unparalleled 3-D HD visualization of the surgical field. As the world’s first robotic surgical system with 3D HD vision, the system provides twice the effective viewing resolution than older models to now offer improved clarity and detail of tissue planes and critical anatomy.

Selecting the Motors
At the heart of each manipulator are dc servomotors designed and manufactured by maxon. Intuitive engineers have designed in over thirty maxon motors, including RE 25 motors, some with and some without encoder feedback; RE 13 mm motors equipped with GP 13 series gearheads and 13mm magnetic encoders; and RE 35 series motors with third party encoders. maxon motors are designed with rare earth magnets in their stators and incorporate an ironless rotor design, thus eliminating magnetic cogging. Especially at slow operating speeds, this represents a considerable advantage compared to conventionally designed motors. The motors also offer good power density and smooth rotation, both of which are important to the Intuitive application. According to Mike Prindiville, Manager, Manufacturing Engineering for Intuitive Surgical, “While there are many options available on the market, maxon motors have consistently met our demands for performance and quality, and been a strong partner in the success of our product.” The maxon motors provide the inputs and outputs to the da Vinci S HD System. Through a series of feedback controls, the motors and encoders receive inputs from the surgeon, are translated in realtime through the console electronics, and provide output signals to the motors in the manipulators.

The motors used on the surgeon’s side cart are called masters to distinguish their dual role. The slave side, or manipulator motors, required the same precision, but also needed to be able to be backdriven while an assistant surgeon moved the end effectors into position. The motors also exhibit low hysteresis at the instrument tips.

The da Vinci S HD Surgical System is the only commercially available technology that can provide the surgeon with the intuitive control, range of motion, fine tissue manipulation capability, and 3-D visualization characteristic of open surgery, while simultaneously allowing the surgeon to work through small ports of minimally invasive surgery. The availability of motors and other components that are designed and manufactured using the latest technologies allows such systems to enter the marketplace.

According to Mike Prindiville, Manager, Manufacturing Engineering for Intuitive Surgical, “On any given day, we rely on 10,000+ maxon motors to deliver patient, surgeon, and hospital value all over the world. maxon motors have demonstrated a proven track record of reliability, low friction, and extended life. Each da Vinci System is tested for critical performance characteristics, including friction, backlash, and compliance profiles, and a wide range of sensor feedback monitoring.