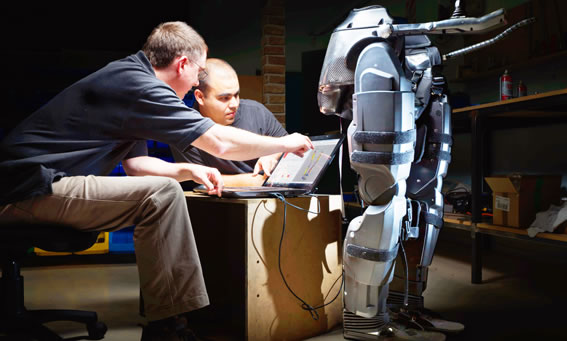 Worldwide, an estimated 185 million people use a wheelchair daily. A company based in Auck-land (New Zealand) has developed innovative robotic technology that helps people with mobility impairment get back on their feet: the robotic exoskeleton from Rex Bionics. The integrated maxon motors ensure smooth limb movement.

Hayden Allen is a normal young man from New Zealand. He has been restricted to a wheelchair ever since a motorcycle accident damaged his spinal cord. The doctors told him that he would never walk again. But that is not the case. Hayden is one of the first users of the Rex robotic exoskeleton. The first time he tested his robotic legs, his friends told him that he should stop looking at this feet.

"I simply could not stop staring at my feet moving," says Hayden as he describes his first steps with Rex (scan QR code below to view video). The robotic legs gave him back his quality of life and a better out-look. Locations that were previously completely inaccessible were now within reach again. In his profes-sion as a mechanic, he is now again able to perform tasks that require him to stand up, and many new opportunities are available to him in his leisure time.

Around nine years ago, the two founders of Rex Bionics, Richard Little and Robert Irving, had the idea of developing this kind of robotic legs. The reasons were obvious: Robert Irving had already been diag-nosed with multiple sclerosis and he knew he would end up in a wheelchair sooner or later. Both of the developer’s mothers are in wheelchairs, thus they knew very well what great obstacles are faced by wheelchair users. The two friends decided to use their expertise as engineers to develop a machine for people who required a wheelchair to move about. This was the start of the New Zealand-based company.

Why an exoskeleton?
Exoskeletons have been developed to help people with mobility impairment to walk. This improves their strength and endurance. Rex gives these people the ability to stand, walk, get up, turn around and sit down on their own again. Moving sideways, taking the stairs or walking on hard, flat surfaces with slopes also presents no problems. Even though the bionic legs cannot fully replace the wheelchair, the user is once again able to perform tasks standing up. Even just being able to be on the same eye level with conversations is an unbelievable experience for these people.

"We want to reach as many people as possible in the world, by using perfected technology and continuous improvements in functionality, form and usability. When we see the unbelievably emotional reactions of Rex users, every day brings us joy and that motivates the entire Rex team," says co-founder Richard Little.

Today Rex Bionics already has two manufacturing facilities where they produce two different Rex versions for different needs: „Rehab Rex“ is intended for use in rehabilitation centers. "Rex" has been developed for private users that can now perform tasks that are not possible when sitting in a wheelchair. According to Richard Little, the largest challenge during the development process was the development of the very complex robotic platform, which also had to be very light. Furthermore one of the basic requirements was that the user, with his restricted physical abilities, has to perfectly harmonize with the externally mounted robotic legs to safely stand and walk.

The exoskeleton weighs 84 pounds, but the user does not carry any of this weight. It is operated by means of an integrated, exchangeable battery that lasts around two hours of continuous operation. Rex is controlled with a joystick and control pad – other exoskeletons frequently use sensors. A large advantage of the joystick operation is that no movement or nerve functions are required to use the exoskeleton. At approximately 3 m per minute, the Rex is not very fast, but the user can move forward very safely. They won't loose balance – because, regardless of whether it is switched on or off, the exoskeleton always remains stable. The user can also stand in a crowded environment, like a sports event or a concert, without worrying about being pushed over. Rex also does not require the use of supporting aids such as crutches, which means that the user has full use of his arms and hands.

Ten strong motors for safe movements
Rex is a highly complex electromechanical device – each exoskeleton has thousands of precision parts, including the limbs that are controlled by a network of 29 microcontrollers. The special arrangement of microcontrollers in Rex makes it possible to move and react within seconds. The movements performed by Rex always feel smooth to the user. Motors made by maxon are responsible for ensuring that no jerky movements occur. They control all movements of the limbs, which move in the same way as a human leg. Ten DC RE 40 maxon motors are used in each exoskeleton. The RE 40 is equipped with powerful 150 W and has an efficiency of more than 90 percent. The mechanically commutated DC motors are characterized by good torque behavior, high dynamics, a very large speed range and a long service life. The heart of the motor is the globally patented ironless rotor that ensures detent-free running of the drive.

Rex Bionics chose to use the high-quality maxon motors for a good reason: Rex is a highly sensitive medical product and the safety of the users is of utmost importance.

The largest challenge, where the motors are concerned, was uniting quality, size and power in a single product. Currently Rex is being used by approximately 18 people in New Zealand, with new users joining this group every month. They can all share the feelings of Mitch Brogan: "My cheeks were aching from my constant smiling and I knew that my life has changed forever."