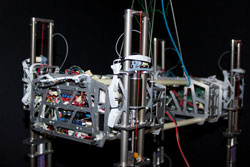 The Pegasus robot, which was created by students of the ETH Zurich during a research project, does not have wings like the famous horse from Greek mythology. But instead, the autonomous robot has strong legs that can gallop almost like those of a horse – thanks to motors by maxon.

As part of a research project at the ETH Zurich, the autonomous robot called Pegasus was created. With its telescopic legs, it is capable of moving across vast distances. The legs are designed for moving in a dynamic trot and can achieve top performance with low energy consumption, thanks to state-of-the-art drive technology. Pegasus has a modular design and can therefore be used for a wide range of applications. Each module consists of two robot legs. Hence he can be sent on his journey with two, four or even six legs. During the time frame of the project, a total of three modules were built.

In the joint project by the ETH Zurich and the TU Delft (in the Netherlands), ten mechanical engineering students – six students from the ETH Zurich and four students from the TU Delft – together developed the autonomous robot during the last two semesters of their bachelor's degree. The specified target was that the robot has to cover a distance of 10 km in less than 10,000 seconds (2 h 47 min., approx. 3.6 km/h) with a single battery charge. The prerequisite was that the robot has to have an extremely energy-efficient design and has to store energy, for example through the use of springs in its legs.

The project was initiated at the end of 2010. The first hopping tests were started in April 2011 – initially, only one leg was used to extensively test the jumping ability. In each leg, a maxon DC RE40 motor drives the spindle that is responsible for extending and retracting the leg. Additionally an EC-4pole motor controls the rotational degree of freedom in the hip module (connecting part between two leg modules). Thus it is the 200 W motor that makes it possible that the entire leg can turn.

Thanks to the special winding technology and the 4-pole magnets, the maxon EC-4pole drives are unbeatable when it comes to delivering the highest power per unit of volume and weight. The motors have no cogging torque, a high efficiency of more than 90 percent, and excellent control dynamics. The metal housing ensures good heat dissipation and mechanical stability. When it comes to service life, these motors also leave the competition far behind.

The controller
Two different positioning controllers are used to control the Pegasus robot. One of these is the EPOS 24/2 controller, which is used to control additional sensor interfaces. This position controller, like all other maxon motor EPOS products, was especially developed for commands and control functions in CANopen networks. Additionally this controller has been equipped with very good motion control functions. With the “Interpolated Position Mode” (PVT), the position controller is able to synchronously move along a path specified by means of setpoints. Secondly the EPOS2 70/10 controller is used. It is specially tailored to the brushed DC motors with encoder or the brushless EC motors with Hall sensors and encoders from 80 to 700 W. In the Pegasus system, the controller on the one hand is responsible for torque control (current mode) of the EC-4pole motors and for speed control (CANopen Profile Velocity Mode) of the used RE motors. In current mode, a constant torque can be controlled on the motor shaft. In “CANopen Profile Velocity Mode”, the motor axis is moved with a specified set speed.

The original target of the project was not achieved, due to the short timeframe. The functionality of various parts of the robot were not yet perfectly matched to each other, explains Steve Heim, former student and a member of the Project Pegasus team. The project is being further developed in the Autonomous Systems Lab (ASL) of the ETH Zurich. Since the end of last year, interns at the ASL are working on successful implementation of the project. In the mean time, the two-legged Pegasus has executed its first stable hops. The target of achieving a distance of 10 km in less than 10,000 seconds with a single battery charge is within grasp.

Making the Case for Total Cost of Operations (TCO)