Over Rough and Smooth – Robots on a Mission to Explore 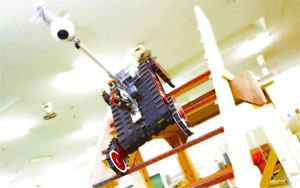 Intelligent robot systems are increasingly being used in disaster control, rescue missions and salvage operations – wherever it is too dangerous for humans. Robots that can look for survivors after an explosion, an earthquake or other natural disasters, or that can provide humans with a view of inaccessible regions, have become indispensable helpers. Powerful EC motors of maxon motor give the Japanese rescue robot “Quince” its drive.

Robots that are used in disaster areas have to have a very high level of adaptability. They have to be fairly small, not too heavy and maneuverable enough to get through cracks or narrow spaces to reach areas deep inside a building. Furthermore rough terrain should present no problem. These rescue robots enter and explore buildings to determine if there are gases, radiation or other life-threatening hazards, before human rescue teams can search the area. Quince has proven that it fulfills all these demands. After the severe earthquake in Japan and the subsequent nuclear disaster in Fukushima, Quince managed to reach the upper floors of the ruins of the power plant in June 2011. There it measured the radioactivity levels and sent HD images to the world outside (see QR code). The robot was able to supply valuable information from areas where no human can set foot.

Quince weighs 27 kg and is equipped with four moving caterpillar drives (flippers). These flippers automatically adapt their angular position to the surface underneath – regardless of whether the robot is climbing steep stairs or crossing rough terrain. Correct ground contact is a very important prerequisite. This contact is accurately analyzed by measuring the power consumption of the flipper motors. Furthermore PSD (Position-Sensitive Device) sensors on the front and rear flippers measure the distance to the ground. In addition to a gripper arm (see fig. 2), two laser scanners can also be attached to the robot. These scanners are capable of accurately capturing the structure of the terrain.

Additionally Quince is equipped with a “bird's eye camera” and can travel quite fast, at 1.6 meters per second. The operator that controls the robot has to tell it which direction to take, but the robot itself determines the optimal flipper positions for crossing various surfaces, for example stairs. Newer Quince motors have additionally been equipped with a device for collecting radio-active dust or ultra-fine particles, as well as a 3D scanner. To ensure that no robot is lost, a connection to a wireless network is possible, which is the only way to navigate the robot if the connection cable breaks.

The rescue robot was developed by Eiji Koyanagi, Vice-Director of the Chiba Institute of Technology Future Robotics Technology Center (fuRO). Koyanagi started his career as a teacher – at the age of 51, he became a professor. This means that he has a completely different background than other researchers in the field of robotics. Quince has been specially designed for extreme conditions in environments where it would be too dangerous for humans. Therefore its main area of application is disaster areas. “When you develop a robot, you first have to consider the tasks that it will perform later. That is the biggest challenge,” explains Koyanagi. Hitherto eight Quince robots have been built. But before this could be done, all components had to be 100% functional. To this end, various trials were run in the large “Disaster City” training area in College Station, Texas. Quince was the only robot that successfully completed the entire obstacle course at the site as part of a RoboCup contest. In preparation for using the robot inside the Fukushima Daiichi nuclear power plant, several specific customizations were required. “The conditions in the nuclear reactor buildings are very tough. If we had attempted to send Quince in without modifications, it would probably have met its end,” says Koyanagi. Therefore the robot had to be able to survive a fall from approx. 2 m high unscathed, and had to be largely maintenance-free.

Powerful motors to beat every obstacle
Where the motor selection was concerned, fuRO required absolutely reliable drives. The motors have to provide high power and high efficiency, yet be small and light. These requirements were precisely met by maxon motors, explains Koyanagi. Six powerful maxon motors drive the robot. The brushless EC-4pole 30 direct current motors each provide 200 W; two of these have been installed in the two main chains. The powerful 4-pole units give their all when Quince maneuvers its way across uneven terrain. Four additional motors (EC22) drive the moving chain drives (flippers). These can automatically adapt their angular position to the surface below. The 3D scanner unit of Quince is moved to the right position by an RE-max 24. Thanks to the special winding technology and the 4-pole magnets, the maxon EC-4pole drives are unbeatable when it comes to delivering the highest driving power per unit of volume and weight. The motors have no cogging torque, high efficiency, and excellent control dynamics. The metal housing additionally ensures good heat dissipation and mechanical stability. All motors of the chain drives have been combined with the GP32HP (High Power) planetary gearhead with MR encoder. This gearhead was customized by installing a large ball bearing and a reinforced motor shaft. With this power pack, Quince has no trouble managing almost any obstacle.

The Cornerstones of Zimmer Group's Industry 4.0 Success - Be part of the revolution!

The Pros and Cons of 5 Robot Programming Methods