The Dome C telescopes in Antarctica must operate continuously in weather that is the most severe on the planet. 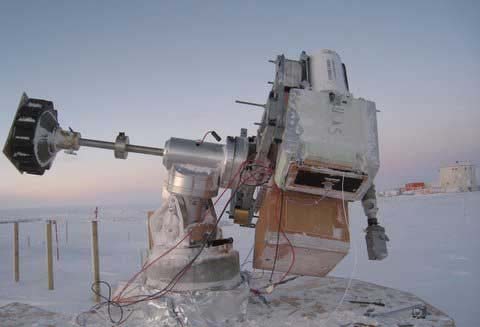 few years now. Just recently there was a new record temperature at the Dome C site, -84.6°C, or -120.28°F. Not many things operate well under such conditions, but the telescope mount — which has to move continuously — used for scientific studies by the Laboratoire Universitaire d'Astrophysique de Nice (LUAN) happens to be one of them.

Astro-Physics designs and manufactures telescope mounts and has proven that they work well in Antarctica through the installation of a number of their 900GTO and 1200GTO mounts that have been operating continuously at Dome C since the early 2000s. This is important because maintenance is so difficult there. Low temperatures and dangerous wind conditions prevent technicians from working outdoors, and the mount must be reliable 24 hours per day for the entire polar night lasting six months. Their latest mount installed at the site, the 3600GTO, is the largest mount used at Dome C to date.

As can be imagined, one of the most important aspects of every telescope in the world is the gear reduction system used in the mounting apparatus. In order for a telescope to maintain a consistent bead on a particular star or system, it must move continuously. If a telescope is not driven, the image of a star, for example, would be out of view very quickly. The higher the telescope magnification, the faster that target will appear to move.
So, in order for a target to stay “fixed” in the viewing field of a telescope, the mount has to move continuously. 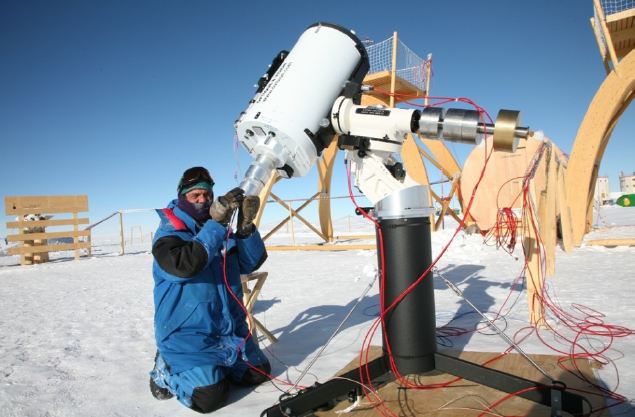 Astro-Physics’ precision mounting systems are for use with telescopes ranging from 50 pounds to ones like the Antarctica telescope that weighs a quarter ton.

"Every system we build uses maxon motors,” explains Wally Piorkowski, Head of Mount Production/Scientist for AstroPhysics. The grease used in the motor’s bearings is ideal for harsh/extreme temperatures, such as the severe conditions experienced at Dome C in Antarctica. Once in place, the maxon motors do not need to be greased which would never work in such severe conditions as those at Dome C in Antarctica. maxon motors also feature an ironless core designed with neodymium magnets, which provide the highest power available relative to motor volume. For mechanical commutation, the motors are provided with either graphite or precious metal brushes. And for the applications on mounts, the motors offered linear characteristics making them easy to implement. Of course, reliability is one of the more important characteristics that make maxon motors ideal for such an application.

There are two axes designed into each mount. One axis, the right ascension axis is mounted parallel to the Earth’s axis and follows the Earth’s movement. Actually, the motor is driven in the opposite direction of the Earth’s rotation so that the target object looks as though it is fixed in the sky. The reduction drive is designed by Astro-Physics. The company only uses maxon’s motor and encoder.

The declination axis is mounted at a right angle from the ascension axis. With the two axes mounted at right angles from one another, the operator can aim the telescope anywhere they want. The encoder is used so that the motor can adjust and correct its position on an intermittent basis.

“We use A-max motors for our smaller mounts and RE25 motors for mounts like the one at Dome C,” Wally said. The RE25 offers the highest torque per unit size in its class. “A major factor in using maxon motors, though, is that they have no cogging,” he said. Cogging or detent is the jerky motion most iron core motors exhibit while operating slowly. maxon motors use an ironless design that eliminates cogging, even at slow speeds like those needed for telescope mounting systems.

“Often our mounts are bought separately from the telescope itself,” Wally said. “Astronomy clubs, schools, associations, etc. buy the telescopic equipment and the mounting system separately then put them together themselves.” The company’s 3600GTO and 3600GTOPE mounts have also been installed in a variety of domestic locations including universities, research organizations, astronomy clubs, community organizations, and foundations committed to the education of children. Companies engaged in solar power research have also used the company’s precision mounting systems.