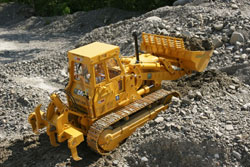 maxon drives also play an important role in model making – for example, many locomotives run their rounds powered by maxon motors. But even crazier things can be found in the world of model making: like the bright yellow Cat track loader built by Marcel Sigrist, a hobby model maker from Central Switzerland. Over a period of approx. two years, he built three true-to-life Trax Cat 983B model loaders at a scale of 1:8. These miniature excavators are driven by maxon motors.

The famed yellow Caterpillar machines are usually gigantic and awe the boy in every man. For Marcel Sigrist from Central Switzerland, nothing seemed more logical than building a model of the loader. But he was not satisfied with building a simple model of the Cat loader. After intensive research and studying the original spare parts manual with exploded views, he started planning and building the remote-controlled miniature loader based on photos and measurements taken on the “real” Cat loader. After 8 months of intensive CAD planning, the first drawing with a scale of 1:8 was finished. The model was to have dimensions of 105 cm long, 38 cm wide, 44 cm high and a weight of 70 kg.

The heart of the Cat: the drive and the electronics
As early as the planning phase, Marcel Sigrist thought of the motors and gearheads. Only maxon motors were considered for the project. The original loader uses spur toothing – therefore it was clear from the start that the model will also use this version. On each traction side, two maxon DC motors with 150 W were connected by means of a toothed belt drive and positioned perpendicularly with a 20:1 worm gear. This gives the loader the required power. A controller for track vehicle models was installed as electronic component. It has a voltage of 12 V and two times 50 A traction current. Simple maintenance of the electronics was a prerequisite for the installation. To this end, all hydraulic and electronic components were installed in a drawer system. Thus the hydraulic lines can easily be removed and all technical components can be accessed easily, in the case of an emergency, by opening the drawers. This carrier system contains the hydraulic pump with its motor, the controller for the hydraulic motor, as well as the oil tank with filler neck and deaeration equipment. The second component is the hydraulic valves with servo systems for the various functions.

The entire SMX sound module, including speakers, was also built on this unit. Two battery blocks (NiMH) with a voltage of 12 V (12 A/h) were used for the power supply. This makes it possible to operate the model track loader for up to an hour. After all parts of the mini track loader were painted, the assembly work started. After only 13 months, the first of three model loaders was finished. This was followed by a successful trial run (see figures 1,3,4).

Not even three months later, number 2 was finished, followed by model 3 a mere three months later. “What I especially liked about this project was the fact that, when I started out, nothing on this model could be bought as a prefabricated part. Planning, measuring and drawing it to get reliable construction plans was a special challenge. In spite of referencing the spare parts book, I can proudly state: I developed it myself,” says Marcel Sigrist.

They're Gliding Over Water – On Solar Power