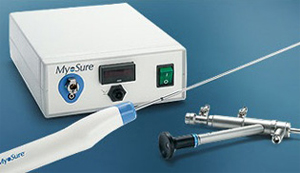 Medical engineers consistently look for ways to provide devices to physicians that offer smaller incision requirements, a more accurate procedure, and the opportunity for a quicker recovery.

The five man engineering team at Interlace Medical worked on their latest tissue removal system for about two and a half years from the original concept to completion of their latest upgrade. Fast turnaround of new devices is always a valuable asset for a company, but it’s all about finding and implementing the right components for the results you’re looking to achieve.

Interlace’s MyoSure® Tissue Removal System was designed to remove fibroids found on the uterine wall. Fibroids affect more than thirty percent of women in the U.S. according to the Advanced Gynecology Solutions website put together by Dr. Paul D. Indman, M.D. Typically women who have fibroids visit their doctor because of abnormal bleeding between menstrual cycles.

In the past, the primary tool used to remove the fibroid tissue was a monopolar loop electrode. The device is used to literally scrape the tissue from the uterine wall. This method produces a large amount of “chips” that can also get in the way of the operation, slowing it down considerably and creating the possibility of less accurate cuts.

It has long been the request of physicians that a less intrusive device be designed for these operations. Once an alternative became available, it was very slow and could not compete with the older monopolar loop electrode methods already in use by many practitioners.

The MyoSure device was designed to eliminate the challenges posed by the presently marketed devices. Since the design of the new system was performed largely in-house, the Interlace Medical team was able to get together regularly and go over the pros and cons in each design step. The team was also very sensitive about the way the device went together to hold down manufacturing costs, which could be passed along directly to the customer.

The challenge in developing the company’s MyoSure® Tissue Removal System was the need to upgrade the present method so that it was fast enough and accurate enough to compete with the present device on the market. Interlace’s first version used an autoclavable motor manufactured by Maxon Precision Motor. The device used a single motor mounted inside the handle, with all the electrical connections transferred through a tiny cable.

The latest version of the MyoSure system was designed with the same cutting technology, except that the motor is now housed inside the controller chassis instead of the probe, eliminating the need for an autoclavable motor. An integral rotary encoder is used for closed loop control of the motor. Still, because the enclosure for the MyoSure had already been designed, the company had to find a compact motor with the highest performance per size that they could get.

The MyoSure operates from a foot petal and only turns in one direction, which made motor selection easier. The RE40 motor used in the device is fitted with rare earth magnets to provide its high performance while maintaining a compact size. These motors use a patented rhombic moving coil design to deliver long life, low electrical noise, fast acceleration, and high efficiency. Plus the component’s ironless rotor allows for zero cogging and simple, accurate control. Motor efficiency is 86% depending on the winding.

Interlace designed a unidirectional flexible shaft into the system that interconnects with the remotely located Maxon RE40 motor. This approach meant that they could go to a single use, totally disposable probe system, which helped with certification. The MyoSure has obtained FDA 510[K] clearance and expects CE Mark certification to sell in Europe in the next year.

The device and its optical scope are 6.25mm in diameter. This means that patients require less anesthesia during the operation. Overall, the device can provide a clear operative field, fewer device insertions, reduced perforation risk, and shorter procedure time — which was the primary design goal.

The MyoSure incorporates Maxon’s EPOS 24/5 position controller as the driver for the device. According to Albert Chin, VP of R&D at Interlace, “Maxon worked closely with us from day one. Their application engineers helped us to select the right motor and controller for the job. This prevented us from over designing the device, which would have increased our production costs.”

EPOS 24/5 is a digital motion controller capable of being used in position, velocity, and current mode. It communicates through RS-232 or CANopen, with complimentary software for CANopen and Windows DLL. The controller only requires an 11 to 24 VDC input to be capable of operating at 5 Amp max continuous current and 10 Amp peak current. The 50 kHz switching frequency and built-in choke insure compatibility with most low inductance motors, while the sinusoidal commutation for brushless motors insures minimal torque ripple and low noise.

The EPOS controller uses simple logic and control functions for monitoring the motor’s operation, including acceleration and deceleration, as well as speed. The motor control logic is a software program that is burned into firmware at the factory. With Maxon’s guidance, the MyoSure control box passed all the electrical safety testing necessary for Class B office use.