Maxon Motors in the Formula Renault 3.5 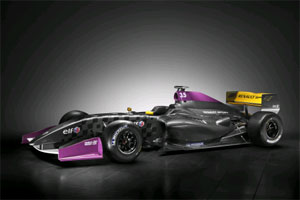 The Formula Renault racing series has become one of the most important racing series for future world-class Formula 1 drivers. Since 2012, a new, more powerful V8 engine has been roaring under the hood of the World Series racing cars. Inside it, maxon motors are responsible for adjusting the electronic throttle system.

The Formula Renault 3.5 is considered to be a preparation series for the Formula 1 and therefore the vehicles have many of the characteristics of the top motorsport class: Carbon brakes, semi-automatic gearshift, left foot brake, and, since 2012, a powerful V8 engine and an adjustable rear wing. In the new World Series vehicles developed by Renault, Zytek engines are used. Zytek is a British company that produces control systems for the automotive industry, drive technology, engines and hybrid technology. All 26 vehicles used in the Formula Renault 3.5 are driven by the new Zytek engines. The engine has been designed especially for the Formula Renault series. The 3.4 liter V8 engine, with its 530 hp at 9250 rpm, provides 50 hp more than the previous engine. And where the weight is concerned, the new Renault again has the edge, as it is around 15 kg lighter than the previous model. A fly-by-wire throttle control system has been integrated into the engine. This system, also called “drive-by-wire” in motorsport, electronically transmits the gas pedal movements to the engine controller. In principle, it handles how far the throttle valves are opened at which pedal position.

This gives the racing driver the ability to obtain a specific torque from the engine at a certain gas pedal position and the respective engine speed. In the case of the Formula racing car, there are three different levels (pedal maps) for different route conditions.

Strong vibrations conquered easily
Accurate control of this throttle system is handled by a maxon DC motor and planetary gearhead. This technology makes the racing cars approx. four seconds faster per round. The maxon DC motors from the RE motor family and the gearhead from the GP family were specially adapted to meet the demands of the high vibration and high temperature environment. During the test phase, the maxon engineers - in close cooperation with Zytek - verified that the engines can function problem-free under the challenging loads. “We began testing maxon’s products in July 2011 and have been extremely impressed with their technical backup and service. The motors need to work in a very hostile environment and maxon really understood the product and the problem and even made suggestions on how to improve the product to help us,” said John Manchester, Operations Director at Zytek. Paul Williams, Sales Engineer at maxon motor uk, commented: “We are delighted to work in partnership with Zytek. 80% of our business comes from modifying our products for our customers and we thrive on challenging projects.”

Electromate Inc. Recognized as the 35th Best Workplace™ in Canada