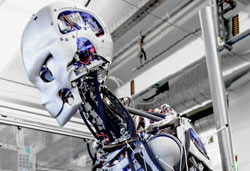 The tendon-controlled humanoid robot created by the University of Tokyo has more than 160 artificial muscles and is the result of many years of experience. Around 100 brushless maxon motors ensures that the only 1.58 m tall robot has humanlike movements.

The University of Tokyo has developed a tendon-controlled humanoid robot that is capable of very realistic humanlike movements. He is called Kenshiro – named after a well-known Japanese hero who was made famous in the 1980s manga comic series. During the development of the robot, the Japanese scientists used the human anatomy as its focus to create an artificial human that looks as natural as possible. “We wanted to understand the movements and appearance of humans and replicate it as closely as possible in Kenshiro,” explains Professor Kei Okada. At a height of 1.58 m and  weighing 50 kg, the robot matches the stature of a 12-year old Japanese boy.

To imitate the very complex human anatomy made up of approximately 640 muscles, the scientists equipped Kenshiro with the most important human muscles: 50 in the legs, 76 in the torso, 12 in the shoulder and 22 in the neck. This robot has the greatest number of muscles ever installed in a humanoid robot. Kenshiro's 160 individual tendon-controlled “muscles” make many humanlike movement patterns possible. Kenshiro can move his arms, legs and torso. He still has to learn how to walk properly. How does a robot learn humanlike movements? It's simple: demonstrate a movement, he will then imitate it.A simple learning method, implemented by means of open source intelligent software and a mechanical interface. Learning how to walk requires more.

Kenshiro's “bones” are made of aluminum and, as is the case in the human body, are movably connected to each other. The biggest challenges to the scientists, led by Professor Masayuki Inaba, was the robot’s weight at 50 kg.  A replica with the size of an adult would weigh approximately 100 kg which means a higher load, higher energy requirements and slower movements.

93 motors for 160 muscles
The researchers from the Jouhou System Kougaku Laboratory (JSK) of the University of Tokyo decided on a drive system by maxon motor. Kenshiro's 160 muscles use 93 maxon brushless DC motors. For those special muscles as in the abdominal and thoracic, only a single motor provides the necessary drive and it is that of the maxon brushless EC 16 and EC 22 motors. These electronically commutated servo motors stand out with excellent torque characteristics, high dynamics, an extremely wide speed range, and their very long service life. Strong brushless motors are required for the muscle movements, therefore 60 W to 100 W maxon motors are used. Another important criterion for the motor selection was the temperature development of the motor. It is not possible to install a cooling system in the robot. According to Professor Kei Okada, it was therefore very important that the motors dispense very little heat.

JSK has been building various service robots and industrial robots since 1980 and today are focusing on their work with humanlike robots like Kenshiro. Just as with their previous robots like Kenta, Kotaro, Kojiro and Kenzoh, their aim is to have Kenshiro copy the human body as closely as possible. This means Kenshiro needs a humanlike appearance. Therefore, the Japanese scientists are currently working on developing a skin for the robot. In the near future, Kenshiro should be able to interact with his environment even more actively. The next goal is to improve Kenshiro's gait, so that he can walk greater lengths and with more stability.

Swiss motor ventures deep under the surface of Mars