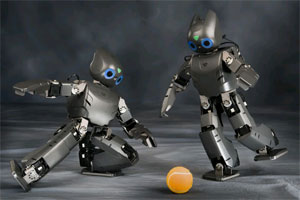 The robot named DARwIn-OP (Dynamic Anthropomorphic Robot with Intelligence-Open Platform) is used mainly for research and education purposes. The user can easily program the robot according to his own wishes, as the system is based on open source. The very quick and precise movements of the robot are executed by maxon motors.

The robot is approx. 45 cm high, is equipped with sophisticated sensors and is able to perform dynamic movements. For example, it can walk very fast (24 cm/s and more), it can speak and listen, run processes, can balance itself and works fully autonomously. One of its biggest hobbies is playing soccer. In June 2012, Team Darwin conquered 24 international teams and won the RoboCup in Mexiko City.

The special feature of the humanoid robot is its open, modular structure that makes changes very easy. DARwIn-OP is a completely open platform; both the hardware and the software can be customized in any way desired and various software implementations are possible (C ++, Python, LabVIEW, MATLAB, etc.). Furthermore, all CAD data for the robot components and instructions for manufacturing and assembly are available online, free of charge. A computer has been built into the humanoid robot; like a normal PC, it is equipped with all customary ports such as Ethernet, USB and HDMI. Thanks to the USB camera integrated in its head, it can locate objects and thus also detect the ball during a game of soccer.

DARwIn-OP was developed by the “Robotics and Mechanisms Laboratory” of Virginia Tech (RoMeLa), with the support of the National Science Foundation (NSF) and in cooperation with the University of Pennsylvania, Purdue University and the South Korean company ROBOTIS. The mini robot is based on the award-winning Darwin series which is being developed ever since 2004. ROBOTIS is to thank for the very high mobility of the robot.

The company manufacturers the so-called Dynamixel actuators, which are used by numerous universities and research centers all around the world in the development of their own robots. Dynamixel actuators are smart actuators with fully integrated DC motors and are produced exclusively for robots. They are characterized by high precision, top quality and a wide functionality range. These all-in-one drive modules with built-in controllers are equipped with numerous feedback functions (position detection, velocity, input voltage, internal temperature) that are controlled via a network. The Dynamixel actuators are programmed by means of RoboPlus, the free graphic programming software of ROBOTIS. DARwIn-OP is a very good example of how intelligent a robot can act with the aid of the actuators.

The drive modules are used in the production of robotic arms, mobile robots as well as humanoid robots. Each Dynamixel unit is equipped with a maxon RE-max motor. The implemented RE-max motors achieve a high performance of 0.75 to 22 W, thanks to their neodymium magnets. Three different versions of the maxon motors are used in the small robot. One of these is the RE-max24, which has been specially modified for this application by adapting the drive pinion. A total of 20 Dynamixel MX-28T units can be found in the DARwIn-OP robot — twelve for the arms, six for the legs and two for the movements of the neck. Robotis chose maxon motors because, although they are small and light-weight, they are very powerful and simultaneously very robust with a long service life.

Well-balanced robots
The robot is supplied with power by means of a rechargeable battery. The DARwIn-OP weighs 2.9 kg and can go through its wide range of motions for 30 minutes on a single battery charge. It can even stand on its head. Three gyro sensors (balance sensor module) make sure that it does not lose its balance.