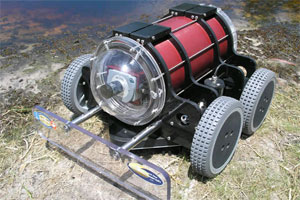 Specially designed robotic crawler navigates around the underwater portion of a ship to remove the biofilm layers that accumulate there. As a battery operated, autonomous vehicle, component selection made up a highly critical part of the design and manufacture.

Toxic paint is used on the bottoms of large ships to prevent fouling, which is when a biofilm layer develops, decreasing the ship’s efficiency in moving through the water. The toxic paint continually leeches copper and other heavy metals into the underwater environment as well, causing damage to the organisms that live there. To further complicate the matter, the paint must be blasted off and replaced every 5 to 10 years, at which time literally tons of toxic waste is produced and needs to be disposed of. A ship that operates with a clean underwater surface free from fouling—even thin biofilm layers—will operate so much more efficiently that potential savings can easily reach over five percent in fuel costs alone. Without the concern for fouling, a ship’s underwater coating can be engineered for corrosion protection and longevity rather than its need to eliminate the potential for biofouling. If realized on all the ships operating in the world today the energy savings would greatly reduce the presence of greenhouse gases, as well.

To eliminate the requirement for toxic paint and its cleaning waste, there needed to be a method to “groom” the biofilm from the underwater portion of a ship. The idea was to create important changes for the ships being built as well as for the environment. That is where the HullBUG (Hull Bioinspired Underwater Grooming) concept originated. “The most important feature of the HullBUG is its small size,” according to SeaRobotics Research Engineer, Dr. Kenneth Holappa. “It is only about half a meter in length. This was a necessary design feature, needed to allow the vehicle to maneuver over the curved surface of the hull while continually maintaining close contact with the surface.

Because there are hazards associated with operating such a device underwater and in a harbor environment occasionally a HullBUG might be lost or destroyed during operation. Keeping the size and cost of the system low definitely helped to eliminate damage as a major obstacle to implementation. So, from the very beginning of the project, small size and low cost have been identified as being critical to the satisfactory implementation of the HullBUG project. As can be expected, this need to maintain a particular size and weight filtered into the selection of every component of the design.

Motion Control Components
The selection of the motors to drive the HullBUG involved a number of critical engineering constraints and compromises. SeaRobotics decided to make two basic models, one with wheels and one with tracks, and offer several options for keeping track of the system’s progress, which will be discussed later. Sizing of the motors, for example, required a calculated estimate of the power, speed, and torque characteristics of the manufactured devices. Determining factors included the resistance caused from pushing the grooming tool across the surface of the ship, the hydrodynamic resistance of the vehicle itself as it moved through the water, friction losses in the shaft seals that were used to protect the motors from the saltwater, and track or wheel friction dependent on which version of the unit was used.

After extensive component research, we chose to use maxon motors and gearheads,” Ken said. “Their motors not only provided a very cost effective solution, but they were highly efficient and extremely simple to implement.” The company used EC Flat motors with planetary gearheads. Two motors (EC45 flat 30W + GP42C) were used on the tracked version of the HullBUG (one for each track), while four flat motors were needed for the wheeled version (one for each wheel). An additional EC Flat motor (EC45 flat 30W +GS45A) was implemented in the grooming tool. That motor used a simple spur gear for speed reduction. And a final motor (EC90 flat), connected directly, was used for the negative pressure attachment device that held the HullBUG in place.

maxon motors offers a full line of fractional horsepower moving coil DC motors and brushless motors ranging in size from 6mm to 90mm, and from 30 mW to 500 watts. They also offer gearheads, controllers, and accessories. “The breadth of their product line and quality of their service helped us to feel comfortable that we had selected the right partner,” Ken said. Flat motors manufactured by maxon Precision Motor provide long life along with their low profile package. The entire EC series of brushless motors are electronically commutated, which enables them to have extremely long motor life since there are no mechanical brushes to wear out. The motors incorporate ball bearings or ruby bearings that also add to the longevity of the motors, especially needed in such harsh conditions. The flat motors were designed specifically for robotics applications where size and weight are important selection criteria. The EC45 flat motors selected for the HullBUG are very efficient and weigh only 75 grams. Continuous output power is 30 watts, while the maximum speed is 10,000 rpm (much faster than what was needed for this application). The important specification for this application was torque. Even under the potentially harsh environments that the HullBUG would be engaged in, the EC45 offered a maximum continuous torque up to 56.2 mNm depending on the winding chosen by the user. The Maxon brushless motors are built to IP54 standards, which was important to the application. Furthermore, the motors were also available in the system voltage that SeaRobotics required for the HullBUG application.

According to Ken, “The large load capacity of the shafts of the GP42 gearhead allowed the wheels to directly mount to the gearhead shaft, greatly reducing the complexity of the overall design of the system.” Gearheads manufactured by maxon are available in a wide range of ratios to enhance speed reduction and/or torque multiplication dependent on the needs of the user’s application. Concentric input and output helped to facilitate simpler and more direct mounting arrangements, as well.

Given that the HullBUG vehicle was to be completely autonomous, it had to be designed in such a way as to operate for many hours on batteries (cables would simply get in the way of the grooming operation). In order to maximize battery life, the grooming of the biofilm had to be performed in the most efficient manner possible. Navigating in a random pattern may eventually get the job done, for instance, but not in a reasonable amount of time. Plus, a typical ship presents a very large underwater surface, often as upwards of three thousand square meters. To keep this amount of area groomed it is expected that a user would employ multiple HullBUG vehicles to operate at the same time and, consequently, require a method of acquiring sophisticated coordinated navigation.

Navigating the HallBUG
A toolset of navigation modes has been created to allow multiple HullBUGs to efficiently groom a ship by dividing the ship’s underwater surface into regions. Numerous algorithms have been incorporated to accurately groom the ship in steps down to the turn of the bilge. Additional algorithms and associated sensors are used to allow efficient grooming of the flat bottom of the ship. Miniature acoustic ranging sonar (MARS) is also an option for navigation control of the HullBUG. This is where a very small close range, pencil beam sonar was specifically developed to allow the vehicle to “see” an upcoming wall or cliff condition such as bilge keels and bow thrusters. Yet another mode of navigation uses a MEMS rate sensor for navigation information. Another feedback mode uses encoder based odometry. Hall sensor feedback from the motor is used as an encoder signal to establish an accurate estimate of odometry. Hall sensors were used instead of optical encoders because of size and cost. The Hall sensors provide better than 1mm accuracy in the measurement of odometry with the motor/gearhead combination chosen.

Ongoing Software Development
An autonomous vehicle is often software heavy in terms of engineering efforts once you’ve selected and implemented the proper motion control system. Getting smooth reliable navigation maneuvers that result in accurate positioning in a widely varying environment was one of the more difficult challenges for the design team. Multiple layers of software were necessary for handling the number and variety of possible events that can occur during grooming. And, the proper organization of the control logic to allow extensibility of navigation behavior was the most difficult part of this complex system. “Software development will continue to be an ongoing effort even after the years already put into it,” Ken said. “Though the vehicle is completely operational, there remains a considerable amount of on-ship testing to be done.” As the project moves forward and into the field, there will no doubt be additional issues that will crop up and need to be addressed, as well. Even now, the vehicle must be able to reliably accomplish its task in a hostile environment and in an unmapped terrain. Then it has to be able to return to the waterline of the ship for retrieval.

This operation must be done repeatedly for days, months, and years, and with multiple systems in the water at the same time. Although this sounds as though it is overly difficult, according to Ken, “A technician was recently trained to use the vehicle and was fully competent within a short period of time. The user interface was borrowed from SeaRobotics’ Unmanned Surface Vehicle (USV) product line and presented an intuitive graphics-driven interface that has hundreds of hours of use by many different customers.” The vehicle is operational and the navigation software is working. The next primary focus will be the structuring of the interface to improve ease of use and allow non-engineering personnel to manage operations.

Sensors and Actuators in Mechatronics: Design and Applications