CYCLE TIMES FOR TRACKMOTION ROBOTIC CELLS
Placing a robot on a track greatly expands its reach envelope, potentially allowing it to tend many more machines or to transfer materials across a much greater distance. For example, instead of three robots each tending a machine at separate locations, a single robot on a track could potentially tend all three, saving money and increasing efficiency. Or, a single material handling robot on a rail could replace multiple robots with intermediate handoff locations.

MINIMIZING CYCLE TIME : GENERAL PRINCIPLES
The overall cycle time of a cell is defined as the time it takes to produce a single unit. There are many factors that affect the cycle time of a robotic cell.

TRACKMOTION CYCLE TIME: MOVING FROM POINT A TO POINT B For a robot on a track, minimizing the distance between operations is the first step to reduce overall cycle time. Once this has been done, there are a number of factors which will determine how quickly the robot is able to move through its sequence of operations.

Determining Maximum Velocity. For a TrackMotion linear axis driven by a Güdel rack & pinion system, the maximum velocity is determined simply by the effective pitch radius of the pinion gear and the maximum angular velocity at which it is able to turn.

Therefore, in order to increase the maximum velocity of a given system, choose a smaller gearbox ratio. (However, this will have an inverse effect on maximum acceleration, as described below.)

Based on the information above, the maximum possible velocity (using a gearbox ratio 2:1 and the maximum gearbox input RPM) is 8.0 m/s for the TMF-1, TMF-2, and TMF-3, and 10.0 m/s for TMF-4. However, it is not advisable that the gearbox be operated at maximum input speed. Also, finding a servo motor which can provide the required torque at such high speeds may be problematic, if not impossible.

Therefore it is safe to assume that the actual maximum velocity will be no more than about 60-70% of those theoretical values. Finally, keep in mind that choosing a small gearbox ratio (such as 2:1) will have a negative effect on the maximum possible acceleration, as described below.

Determining Maximum Acceleration. Determining the maximum possible acceleration of the carriage requires quite a bit more information. According to Newton’s famous equation, acceleration equals force divided by mass. The forces acting upon the carriage include both the force between the pinion and the rack as well as various frictional forces: the rolling resistance of the rollers, friction from the guideway scrapers and lubrication system, etc. The mass of the system includes the carriage itself, the robot on the carriage, as well as everything else that is connected to it (cables, connectors, etc.) Also, because the carriage involves rotational elements (rollers, motor shaft, couplings, gearbox elements, pinion), there is also rotational momentum and rotational friction which must be factored into the equations of acceleration.

Robot Mass: For most TrackMotion systems, the most significant contribution to mass will be the robot. Therefore, choosing the smallest robot which can perform the required tasks is essential for maximizing the acceleration of the system. This also applies to any robot riser or payload attached to the carriage. The lighter the overall system, the more quickly it can accelerate with a given applied force.

Servo Motor Torque: There are a wide range of servo motors which are compatible with Güdel gearboxes. Each motor will have its own speed-torque characteristics, usually illustrated by a speed/torque graph. For electric motors, maximum torque will decrease as the speed of the output shaft increases. Servo motors typically have a “peak” or intermittent torque capacity, as well as a rated torque capacity, for continuous operation, for a given speed. The motor can operate for an indefinite period within the “continuous” zone without overheating. Therefore the motor’s RMS speed and torque must lie within the continuous region.

Gearbox Ratio: Because the gearbox reduces the rotational velocity going from the motor to the pinion, it has the effect of increasing the output torque by a corresponding amount.

Short Distance Travel: For travel distances less than this critical distance, where the robot carriage never achieves its maximum velocity before decelerating, the travel time is simply a function of distance and the rate of acceleration:

For short distances (below the critical distance), increasing the maximum velocity has no effect on the travel time! Therefore, when travel distances are short enough such that the robot does not reach its maximum speed, the strategy to reduce travel time is to increase acceleration by choosing a servo motor with higher torque, and/or by choosing a higher gearbox ratio. (Keep in mind that maximum acceleration can also be improved by lightening the payload on the carriage, so look for ways to reduce mass wherever possible).

Long Distance Travel: For distances above the critical distance, the travel time is a function of distance, maximum velocity and acceleration.

For travel distances above the critical distance, the first component of this equation will be the larger factor in the travel time. Therefore, once the critical distance has been exceeded, the first strategy to reduce cycle time is to increase maximum velocity by choosing a servo motor with a greater maximum rated speed, and/or by choosing a lower gearbox ratio. Once an attempt has been made to increase the maximum velocity, further cycle time improvements may be achieved by increasing acceleration (as described above).

WORKFLOW SCHEDULING
For robotic cells in which there is more than one operation being performed on each part, there are several decisions which can be made affecting cycle time. First, there is a decision as to whether a forward or a reverse cycle will be implemented. Secondly, implementing a dual gripper instead of a single gripper can greatly reduce cycle time. Lastly, the number of parallel machines simultaneously performing each operation must be determined for optimum efficiency.

Forward or Reverse Cycle. In a “forward cycle”, the cycle begins with all machines empty. The robot picks up a part from the input buffer, carries it to the first machine, waits for the first machine to finish, then carries the part to the next machine (and so on until all processes are completed and the part is dropped off at the output buffer).

The reverse cycle allows for more machines to be occupied by parts simultaneously, which increases efficiency. However, it increases the overall move distance required by the robot per part.

So, for single-gripper robots, where the processing time for each machine is always less than the time required for the robot to travel from that machine to the next, the forward cycle is preferable. In all other situations, the reverse cycle is more efficient. 2

Dual-Gripper EOAT. Implementing a dual-gripper EOAT can greatly reduce the overall cycle time for most systems in which machine processing time is greater than the robot travel time. A dual-gripper EOAT allows for all machines to be occupied at the beginning of each cycle, and it reduces the overall travel distance per part. The cycle begins with all machines occupied and both grippers empty. The robot picks up a part from the input device with the first gripper and then travels to the first machine.

Parallel Machines. In situations where one operation has a longer duration than another, the overall efficiency of the cell can be increased by running more than one of the slower operation in parallel, but having multiple machines. For example, if operation #1 takes 10 seconds per part, but operation #2 takes 30 seconds per part, there will always be wasted time as the robot waits for operation #2 to complete, limiting the overall capacity of the system. However, this wasted time can be reduced by adding additional machines performing the slower operation.

CONCLUSION
There are a number of factors affecting the overall cycle time of a robotic cell, from the layout to the selection of components. Making the work cell as compact as possible, so that robot and track movements are minimized, is the first step. Choosing the lightest robot available which can perform the necessary tasks will allow for more rapid carriage acceleration. A Güdel application engineer can assist in the selection of a servo motor and gearbox ratio combination which will provide the correct tradeoff of velocity and acceleration. Finally, where parts are being moved through multiple operations, a dual-gripper EOAT should be considered.

APPENDIX A: TRAPEZOIDAL AND S-CURVE MOTION PROFILES
Trapezoidal Motion Profile. The trapezoidal motion profile is based on the assumption of constant acceleration and deceleration. 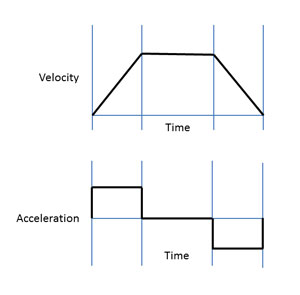 There are drawbacks to designing a system with extremely high jerk, namely the introduction of vibrations or oscillations. For a given load, the higher the jerk (or change in acceleration), the more powerful the vibrations will be, and the larger the number of vibrational modes that will be excited. This may result in increased settling time or reduced accuracy if the vibration frequency matches resonances in the mechanical system. Vibrations will also lead to greater stresses on the system and reduced life due to material fatigue. Therefore another motion profile, known as the S-curve Profile, is often preferred.

Since trapezoidal profiles spend all their time at full acceleration or full deceleration, they are faster than the S-curve profile. But if the “all on / all off” approach causes an increase in settling time, the advantage is lost. Many times, even a small amount of smoothing between full acceleration and zero acceleration can substantially reduce induced vibration. The specific choice of the form of the S-curve will depend on the mechanical nature of the system and the desired performance specifications.

Credit for the written content of this document is Don Bromley, Applications Engineer, Güdel, Inc.

Copyright ©2015. Second edition. All rights reserved. No portion of this whitepaper can be reproduced without approval from the management at Güdel Inc.