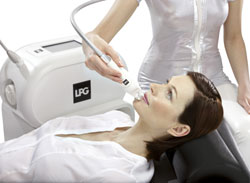 For the past three decades, French company LPG has been offering a special treatment for tightening skin and tissue, using mechanical stimulation powered by maxon motors.

The ideal beauty changes throughout time. During the Renaissance, women with a double chin were considered sexy, while for centuries, extremely pale skin was the measure of all things. Nowadays, both men and women want to be slim and tanned with an athletic figure. If this isn't your natural condition, you can give nature a hand – with treatments or surgery. Every year millions of people go under the knife to get closer to their own ideal beauty. Many others rely on non-invasive methods to get rid of surplus weight such as laser, light and ultrasound therapies.

One of these that stands out in particular is Endermologie. This cell stimulation procedure, which was developed by the French company LPG almost 30 years ago, involves targeted mechanical treatment of the skin. LPG founder Louis-Paul Guitay designed the first device after being compelled to undergo rehabilitation therapy following an accident. His aim was to speed up the healing process. The initial focus here was the treatment of scar tissue. Then it became apparent that this technology also led to tighter and more elastic skin and reduced cellulite. In addition – to the delight of many female patients – it also reduced the fat cells in the hypodermis, the tissue immediately below the skin.

Kneading and rolling for more collagen
Today some 200,000 people in 110 countries undergo treatment with LPG technology every day. There are two versions of the treatment. The original version, Lipomassage, uses the kneading-rolling principle. The therapist massages the customer using a hand-held device, which is equipped with two rollers controlled independently of each other. They are driven by brushed DC motors. The size of the hand-held device depends on the part of the body to be treated. During the procedure the patient also wears a whole-body suit, designed to support the effect of the massage.

But what does that mean? To be specific, the procedure stimulates lymph drainage. The reaction produced by the customer's own body stimulates the formation of additional collagen and elastin in the dermis (the second layer of the skin). Collagen is an important protein in the body, responsible for the skin's firmness and the ability for wounds to heal. Elastin on the other hand ensures the suppleness and resistance of the skin. As we grow older, the body produces less of both.

New procedure with brushless drive
LPG caused a stir last year when it launched the new Endermolift method. It functions in a similar manner to Lipomassage by applying suction to the skin using the head of the instrument. Mechanical stimulation is brought about by two pulsing flaps, whose beat frequency can be adjusted by the therapist. The maxon motor used in this device is a brushless EC 16 combined with a GP 16 planetary gearhead. The gearhead has been customized in this case with the addition of plastic parts to minimize the noise level. “Factors such as the reliability, torque, speed and the long service life all played a key role in our decision to go with maxon motors”, comments Arnaud Fuster, Head of R&D at LPG.

For follow-up treatment after liposuction
Endermolift is designed to treat the face, neck and décolleté and offers different stimulation modes. “This makes the treatment far more intensive and therefore more efficient”, explains Arnaud Fuster. He points out that the results are visible instantly: Radiant skin after just one session, and fewer wrinkles after 12 sessions. Treatments are available at beauty salons and spas, as well as clinics. “We often use Endermologie after procedures such as facelifts or liposuction, and also when dealing with cellulite and for toning the body's skin”, says Dr. Gerhard Sattler of Rosenpark Clinic in Darmstadt, Germany.

"Factors such as the reliability, torque, and the long service life all played a key role in our decision to go with maxon motors.", Arnaud Fuster, LPG

LPG's success shows no sign of letting up any time soon. “The beauty market is huge. Men and women are always seeking new ways of combating the aging process”, explains Arnaud Fuster. His company provides consumers with the technology for pursuing this ideal. And unlike cosmetic surgery, it is painless.