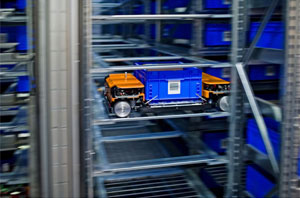 The upcoming company YLOG builds autonomous robots for transporting containers at logistics companies. The Autonomous Intelligent Vehicle (AiV) helps to cut energy costs and to optimize the use of space in the warehouse. The integrated maxon drives ensure that the free-moving AiVs are driven with precision.

In 2007, Heinrich Amminger and Martin Trummer from Austria had an idea for revolutionizing warehouse logistics. They developed the automated small part warehouse – an intelligent and very environment-friendly logistics system that is winning an increasing number of customers for Ylog, a start-up company located in the town of Dobl close to Graz. Their warehouse logistics principle is easy to describe: The technology makes use of individual, freely moving vehicles (AiVs). The vehicles detect each other, observe right-of-way rules, recognize one-way routes and complete their tasks fully autonomously, without intervention from or coordination by a central computer. By using this new technology, potential for rationalization can be revealed and costs saved. Other areas where robots have a big advantage over traditional systems are the price-performance ratio and energy consumption. Existing systems, even the modern ones, usually use storage and retrieval systems that move back and forth alongside the shelf to deposit and remove goods. YLOG offers the first solution that combines the container logistics of a small part warehouse with a transport system that uses vehicles that can move around freely. This warehouse type is used in 95 percent of all warehouses worldwide.

Ylog builds shuttles in different sizes, with swiveling wheels that are suitable both for warehouse logistics and transport logistics. Thanks to the on-board navigation system, the AiVs can compute a simple task to be executed and find their way through the shelves. Attention to detail characterizes the development of the intelligent logistics system - for example, the transport vehicles are recharged with current during operation.

This is made possible by the fact that the approx. 50 kg shuttles do not need much space to maneuver. The transport vehicles have a rating of only approx. 100 W, therefore supercapacitors are used instead of rechargeable batteries. The big of advantage of these capacitors are that they can be charged in a matter of seconds. However, they cannot store as much electricity as rechargeable batteries. Thanks to this low power consumption, 200 robots can be operated with the same amount of energy as is consumed by a single conventional storage and retrieval system, which uses approx. 20,000 W on average. The decisive element of the logistics system is the control system: Although a centralized unit informs the robot which containers are to be fetched or deposited where, the robots steer themselves based on the programmed traffic rules. Thanks to this decentralized approach, even as much as 500 transport vehicles can travel around in a single warehouse.

maxon motors for high precision steering
Motors and gearheads by maxon motor perform various tasks in the autonomous vehicles. Of the eleven axes on an AiV, nine are driven by maxon motors. The motors are responsible for controlling the wheels, as well as the movements for picking up and putting down the containers. Different customer-specific motor versions with gearheads are used. Each shuttle is equipped with nine motors in total. For example, four maxon EC max 30 motors are used as steering motors for the robotic vehicles. The swiveling wheels of the vehicles are moved to the correct position by the drive. The electronically commutated EC motors stand out with excellent torque characteristics, high power, an extremely wide speed range, and of course with a very long service life. In combination with the drives, maxon planetary gearheads are used (ceramic version). By using ceramic components in gearheads, the wear characteristics of critical components can be significantly improved. The advantages are a longer life span, higher continuous and short-term torques, as well as higher input speeds.

YLOG needed motors in different sizes, combined with the appropriate transmission ratios - and maxon was able to provide a perfect match for all their requirements. Another factor that convinced the young company to choose maxon motors was the individual, customized drive design offered by maxon, for example for the steering motors. To date, YLOG has already equipped nine warehouses with their transport system. The largest is currently being set up in a glass factory in Germany. Here, more than 52 AiVs go about their ways – that is a total of 468 maxon motors that transport several thousand warehouse parts from one location to another, every single day.

Brushless DC Motors for Down Hole and Directional Drilling

Trusting the Next Step