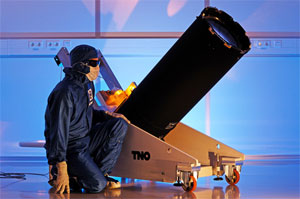 There is still a long way to go before we can make our own stars. However, in scientific applications, the technology is already in use today. The Netherlands Organization for Applied Scientific Research TNO has developed a projection system for the Very Large Telescope (VLT) of the European Southern Observatory (ESO). The so-called “Optical Tube Assemblies” are complex projection systems for generating artificial stars. A high-precision drive system with two brushless maxon flat motors, planetary gearhead with spindle and encoder ensures accurate positioning of the laser.

The European Southern Observatory (ESO) is the most successful scientific observatory in the world. Since it was founded in 1962, the ESO has been providing astronomers and astrophysicists with state-of-the-art research facilities. The flagship of European astronomy is the Very Large Telescope (VLT), located on mount Paranal in Chile, which offers optimal conditions for observations in the infrared and visible light spectrum. The VLT is the most advanced optical instrument in the world and consists of four Unit Telescopes (UTs) or “main telescopes” with mirror diameters of 8.2 m and four 1.8 m rail-mounted movable Auxiliary Telescopes (ATs). The Netherlands Organization for Applied Scientific Research TNO has developed a projection system for the VLT. The so-called “Optical Tube Assemblies” (OTAs) are complex projection systems for generating artificial stars. With these systems, laser beams are shot high into the atmosphere to generate artificial stars. These optical tubes belong to the critical elements of the “Four-Laser Guide Star Facility” (4LGSF). This facility represents the next generation of telescopes with adaptive optics, the so-called Adaptive Optics Facility (AOF), which is used at the VLT. The 4LGSF consists of four powerful 20 W lasers and helps to correct image distortions of the VLT, caused by turbulences in the air. Furthermore, thanks to the new laser system, better coverage of the field of view of the telescope is achieved.

Normally, telescopes collect incident light from the sky and focus it in an instrument. With this new technology, the opposite approach is taken. The telescopes are used to project the laser beams into the sky and thus create points of light. The laser beams excite a layer of sodium atoms at an altitude of 90 km in the atmosphere. As a result, they start to radiate light. This happens with a positioning accuracy of 45 mm at an altitude of 90 km. These glowing spots act like artificial guiding stars that make astronomical observations in their proximity easier for the scientists. With four such artificial stars, the focus of the VLT can be improved.

maxon drive systems in the Field Selector Mechanism
The design of the OTA consists of a 20x laser beam expander and an active tip-and-tilt mirror, the Field Selector Mechanism (FSM). This mechanism is bonded to a membrane spring-and-strut combination that allows only tip and tilt movements. The mirror of the FSM has a diameter of 100 mm. It can be rotated around two orthogonal axes in a plane parallel to the mirror surface. (Fig. 2) The rotation of the FSM mirror results in an asymmetrical reduced response in the on-sky angle of the laser beam. The mirror is elastically hinged and is aligned by means of self-locking actuators with high stiffness. To achieve the required absolute accuracy, sensors that directly measure the mirror's orientation with respect to the base are used.

The maxon motor drive system is responsible for the accurate tip-and-tilt movements of the mirror in the FSM and thus for precise alignment of the laser in the sky. In a telescope, two motors are used per FSM unit. For the design of the actuators, the dynamic range requirements were decisive. Only a few commercial actuators are equipped with a self-locking function that fulfill these requirements. Therefore, TNO developed a high-precision spring transmission based on a standard maxon spindle drive with planetary gearhead and integrated ball-screw spindle. The functional principle is shown in figure 3: When the motor rotates, the nut compresses a soft spring. The soft spring exerts a force on the stiff spring that is connected to the mirror support. The stiffness ratio between the soft and stiff spring is 1:22. Therefore, motion of the nut results in a factor 22 smaller motion of the mirror. This principle increases the resolution dramatically, whereas the dynamic behavior of the FSM is only slightly compromised. As the available space in the FSM units puts limits on the height of the components, the brushless flat motors are especially suitable for this application.

In 2015, the first telescope in the Paranal Observatory in Chile will be equipped with this new laser technology. Furthermore, the ESO plans to implement the technology in other telescopes. The planned European Extremely Large Telescope (E-ELT) with a mirror diameter of 40 m (largest telescope for visible and infrared light worldwide) will also be equipped with the laser technology. Thus it is certain that mankind will also see the stars much more clearly in the future.

Brushless DC Motors for Down Hole and Directional Drilling

Understanding the Distinctions Among Torque Ripple, Cogging Torque, and Detent