Everight Position is dedicated to working with engineers to find novel solutions for linear, angular and tilt position measurement.

Too often 'accuracy' , 'resolution' and 'repeatability' are used interchangably. When selecting a rotary encoder for a given application, it is important to define these three parameters independently and also to understand which is of most importance. For example, it is quite plausible to have an application that requires high resolution, but low accuracy. The below White Paper provides formal defitinion and context for these important parameters with respect traditional optical encoders, which are historically the gold standard for rotary measurement and also the Netzer Electric Encoder, which relies on capacitive technology.

Figure 1 illustrates the terms accuracy, resolution, and repeatability. The orange squares designate measured values; the X-axis designates a variable parameter, such a time. An ideal sensor should repeatedly provide the same output (or digital code), corresponding to the true position – shown by the black line. Repeatability is the extent to which, the same output value, whether correct or not, is repeatedly obtained for the same measured magnitude in the presence of an outside variable - all other variables being constant, it is often referred to as precision. In the case where the variable is time repeatability depends on electrical noise which is inherent in any physical measurement. This noise results from the discrete nature of the electric charge; it has a Gaussian amplitude distribution, constant spectral density, and zero average value. Accuracy which depends on the difference between the time-averaged measured value and the true value is depicted by the dashed black line.

Resolution – shown by the small rectangles, is simply the minimal change in the measured value which still result in a discernible output change, it is usually smaller than the accuracy. The output code of the encoder may also be affected by its history through physical memory mechanisms –see Figure 10; for example, thermal expansion/contraction may be partially irreversible due to mechanical creep moisture absorption etc, and the encoder may provide different codes at the same temperature and at the same position.

Figure 2 illustrates accuracy and precision (repeatability) by means of probability distributions of successive samples of an encoder output with a fixed input X in the presence of electronic noise. The Y value reflects the probability of obtaining a true output value. The blue graph represents excellent accuracy (zero average error) but low precision (large variance due to large noise), the green and red graphs represent the same accuracy with successively less noise and thus higher precision. The purple graph represents medium accuracy and a precision. 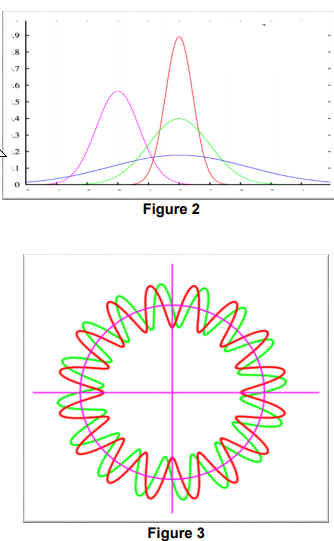 Since repeatability also sets a limit to the resolution and also cannot be mapped and compensated it is ultimately the defining factor and is synonymous with precision. Figure 10 is a general model that includes the non-idealities which result in the encoder output error. The actual encoder is depicted by the red dashed box and its “ideal” portion in the blue box.

Figure 3 illustrates graphically the output signals of the Fine-channel in a rotary Electric Encoder™ with 16 electrical cycles per revolution (EC/R). The angular resolution of the encoder depends on the number n of EC/Rs in the Fine-channel and the number N of angular slices to which the electric cycle

What is angular resolution?

What to Consider When Choosing a Rotary Encoder