Today, Denmark’s Minister of Industry, Business and Financial Affairs, Simon Kollerup, unveiled what will become the new home of Mobile Industrial Robots (MiR) and Universal Robots (UR), the two flagships in the thriving Danish robotics industry. The companies will share 32,000 m2 (334,000 square feet) in a new “cobot hub” in the city of Odense, the heart of Denmark’s rapidly expanding robotics cluster. 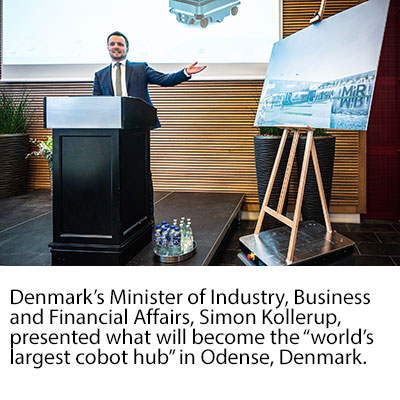 Odense, Denmark -- With financial backing from their joint U.S. parent company Teradyne, Mobile Industrial Robots (MiR) and Universal Robots (UR) have acquired a 50,000 m2 building site in Odense, where $36 million will be invested in the construction of a major cobot hub in the “cobot capital” of the world. Collaborative robots – or cobots – are now the fastest growing segment of industrial automation. Cobots are a type of user-friendly robots that can work closely with humans without the need for safety guarding, enhancing both work environment and productivity.

The new cobot hub supports Teradyne’s mission to further strengthen the significant leads that both MiR and UR have established worldwide.

“MiR and UR are leading the world in the collaborative robot revolution that’s making automation solutions available to companies of all sizes. Teradyne continues to invest aggressively in the development of new products, solutions, and sales channels and this new facility is a key part of our growth strategy,” says Mark Jagiela, President and CEO of Teradyne. “We have found something very special in Denmark. The Danes’ combination of innovative industrial design, combined with a practical business sense, have created a perfect combination for this emerging industry. The ability to make robots work in collaboration with humans in a user-friendly manner is something we have not encountered to this degree anywhere else in the world and we’re very excited to expand our capabilities in Odense.”

This is not the first time the MiR and UR owner has provided cash support for robot development in Denmark. To-date, Teradyne has invested more than half a billion USD in the two young Danish robotic companies, both of which are growing rapidly.

Expects further job growth
The building site is in Odense’s industrial district close to UR’s current headquarters, which will also become part of the new cobot hub. The two companies will continue as separate entities with the aim to create an attractive environment that will help attract new employees to facilitate the continued growth expected by the two companies in the coming years.

“Denmark has a significant lead in the global market for cobots. Investing ambitiously in building the world’s largest cobot hub right here in Odense makes a lot of sense,” says Thomas Visti, CEO of Mobile Industrial Robots. “Offering a strong, professional environment with superb facilities enables us to attract talent from all over the world.” MiR has hired 100 new employees the past year, with UR adding 280 new staff members during the past two years. Today, the two companies have 160 and 450 employees respectively based in Denmark. UR employs almost 700 employees worldwide while MiR’s staff counts a total of around 220 globally.

Unique talent base in Denmark
Jürgen von Hollen, President of Universal Robots, sees enormous potential in the cobot market. “This is a market expected to grow to a total value of almost $12 billion in 2030, according to ABI Research. Demand for Danish cobots already means that we are growing out of our current offices in Odense, both at UR and MiR,” says the UR President. “Odense has a strong ecosystem of talent and we are pleased to have the opportunity to invest long-term in the unique robotics environment that we have been building here over the last 10 years.”

Danish robotics cluster on the rise
The Danish robotics industry is currently booming; the 2019 annual survey from trade association Odense Robotics shows that 8,500 people now work for Danish robotics companies, 3,900 of them in and around Odense, Denmark’s third largest city. If the industry follows the growth forecasts, the Danish robot industry will employ 25,000 employees in 2025 according to the Danish analyst firm Damvad.

And it’s not just the number of employees that’s growing. Danish robotics companies’ total revenue rose by 18 percent in 2018, reaching $995 million with exports increasing 26 percent. These figures are particularly significant in that just 15 years ago Denmark did not have any robotics industry to speak of.

About Universal Robots
Universal Robots (UR) was founded in 2005 to make robot technology accessible to all by developing small, user-friendly, reasonably priced, flexible collaborative robots (cobots) that are safe to work with. Since the first cobot was launched in 2008, the company has experienced considerable growth with the user-friendly cobot now sold worldwide. The company, which is a part of Teradyne Inc., is headquartered in Odense, Denmark, and has regional offices in the United States, Germany, France, Spain, Italy, UK, Czech Republic, Poland, Hungary, Romania, Russia, Turkey, China, India, Singapore, Japan, South Korea, Taiwan and Mexico. In 2019, Universal Robots had a revenue of USD 248 million.

About Teradyne
Teradyne (NASDAQ:TER) brings high-quality innovations such as smart devices, life-saving medical equipment and data storage systems to market, faster. Its advanced test solutions for semiconductors, electronic systems, wireless devices and more ensure that products perform as they were designed. Its Industrial Automation offerings include collaborative and mobile robots that help manufacturers of all sizes improve productivity and lower costs. In 2019, Teradyne had revenue of $2.3 billion and today employs 5,400 people worldwide. Teradyne® is a registered trademark of Teradyne, Inc. in the U.S. and other countries.