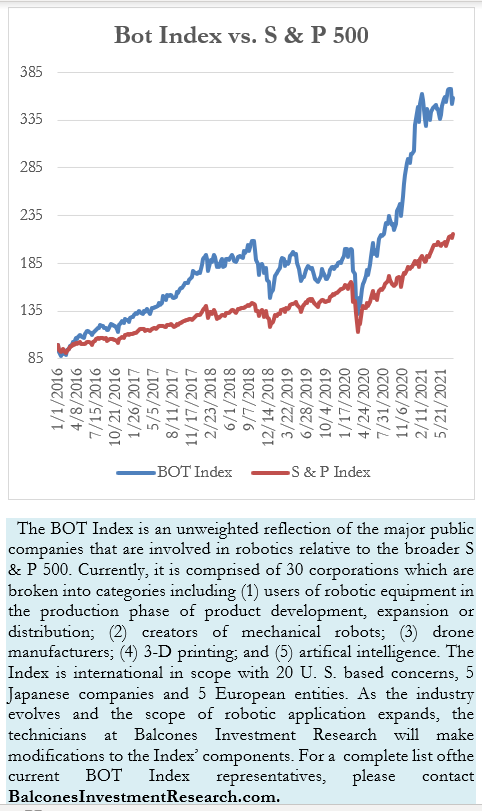 Very little in the way of extreme moves influenced the 1.82% gain of the Bot Index in last week’s trading. In fact, there were only two stocks within the index whose price movement exceeded 5%, and they were both on the upside. NVIDIA Corp. led the gainers with a 7.65% improvement following its 4 for 1 stock split. The chip maker had been fairly weak in July trading; however, investors felt the slide had been overdone and started picking up shares as the broad market began showing some strength. Also, contributing to the bots’ weekly improvement were shares of Brooks Automation whose fortunes rose 5.01%. Like NVIDIA, Brooks had languished during much of the summer months. After reaching a high of $104 in early June, the stock traded down to $83 to start the week before bouncing to close at $89.96.

While there were no major decliners during the week, the negative column was dominated by Asian companies. Hiwin Technologies, Fanuc and Cyberdyne all fell around the 2% range as fears of the delta-covid variant led to concerns for the fragile economic recovery in the region.

Only four domestic holdings showed any weakness and none that declined more than a single percent. 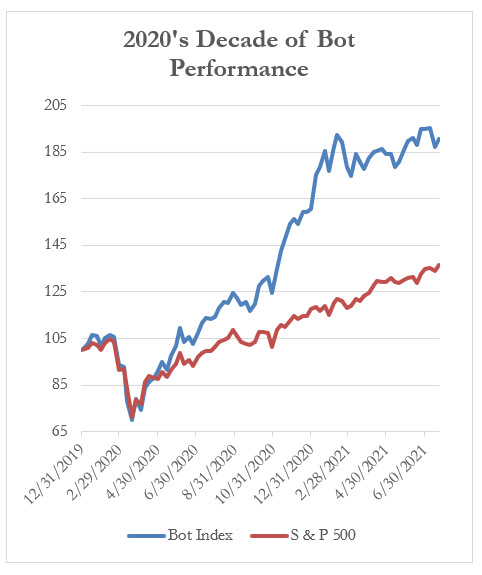 It’s All About the Juice:

In recent issues of the Bot Brief we have reviewed the practical and problematic characteristics of various new energy sources. In the most recent issue of IEEE Spectrum there were a couple of articles that perpetuated the outlook for energy. The first feature discussed the amazing properties of a relatively new form of materials that were initially created in 2016. These new resources, entitled topological insulators, present an intriguing advancement in the potential efficiencies in electrical and light conductivity. Topology is sometimes referred to as rubber sheet geometry, whereby any object has physical properties that cannot be deformed into an entirely different shape but can be bent, twisted, stretched, or shrunk. The topological insulators are somewhat unique in that they allow light or electricity to flow around corners and defects with no loss of strength. Scientists have uncovered a number of uses for the new materials that range from transistors to laser technologies and potentially superconductors that could dramatically expand processing capabilities.

The second article entitled, “Engines of Change- A combination of batteries, motors, and smarts is pushing aside internal-combustion engines, large and small,” expanded on the growing application of battery powered devices and their replacement of traditional gasoline fueled engines. In one example, the flying taxi designed by Joby Aviation, is said to be relatively quiet, lighter, and more efficient than internal combustion power alternatives. The feature ended with the quote, “The 20th century belonged to the engine, but the 21st century belongs to the motor, which is simple, silent and smart.” In other words, don’t send your budding high school senior to get their petroleum engineering degree!

Robotic Board Handling and Other Flat Material