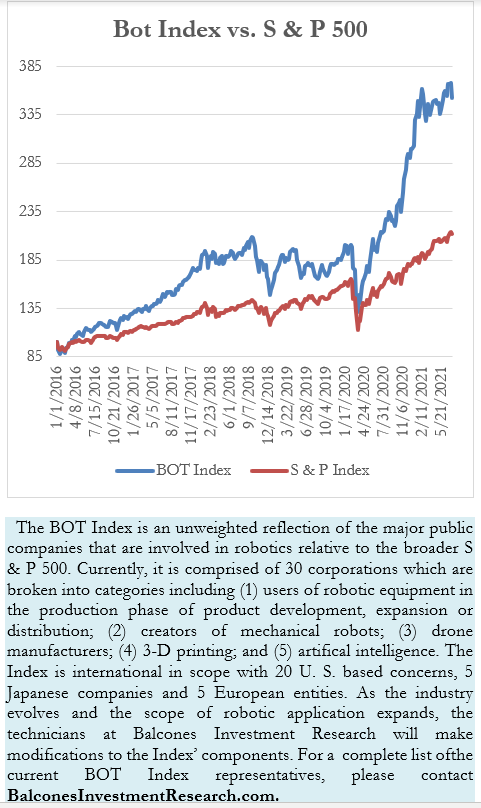 The volatile actions of 3D Systems over the past couple of months have carried a significant impact on the weekly movement of the Bot Index. The impact of 3D’s 26 ½ % dive last week assisted in the bot’s relatively poor performance. While the S & P 500 declined 97 basis points, the bots tumbled over 4 ¼%. 3D Systems was not the sole contributor to the decline as the index’s high beta components reflected investors risk-off posture.

3D Systems has been on a relatively deep slide following its near $40 peak in late June. With the stock closing at $25.30, the tumble represents a 58% utter collapse in investors’ appraisal of the company’s future. The only accountable news that could have prompted further investor concern was the fact that a major competitor – Desktop Metal had acquired Aerosint. With Aerosint holding the patent on a specialized form of metal layering, concerns were levied on the competitive impact to 3D Systems of the new alliance.

Otherwise, there were three companies that experienced double digit declines together with NVIDIA Corp. who retreated over 9%. Following 3D Systems was a 14.92% slide by Oceaneering International, a 10.82% drop by Accuray Inc. and Immersion Corp’s 10.27% fall.

The 3% bounce back from the prior week’s 4.64% decline by Hiwin Technologies brought the stock to be the only positive performer on any substance this week. 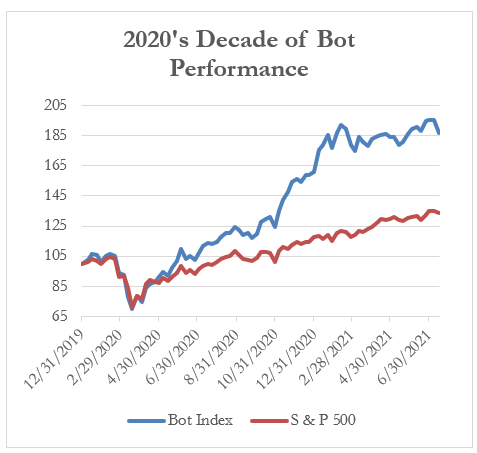 In a series of recent articles in The Economist, several topics were touched upon which are of interest to the robotic world. First, was a feature entitled The Software Software Engineers which featured the rapid expansion of AI in the writing of software code. In an effort to both make code construction more efficient and without bugs of malicious or unintentional nature, a plethora of companies have begun using AI enhancements to software creation. The authors left readers with the ominous concern of AI writing code without human intervention to further its own security.

The second publication was entitled Drones Off the Leash. In the growing list of drone applications – from delivery of goods and services to agricultural enhancements, to infrastructure reviews and defense purposes, drone uses are (pardon the pun) skyrocketing. In response to the recognition of these useful applications, international laws regarding airspace are being revised to accommodate non-point of sight drone journeys. With advances in vision and radar technologies, drones are becoming more acceptable to regulators who are responsible for the public’s safety.

The third in the series of articles was Seven-tenths of a Yellow Sun. This feature reinforced the growing attention of the development of fossil fuel alternatives. As the Bot Brief has frequently addressed, the use of battery power, hydrogen and ammonia power, fusion and fission are making rapid strides in attempting to solve climate change. The Economist writing addressed the difficulties of fusion technologies that are under exploration by several international concerns. Like the energy production of the sun, contained fusion techniques would produce no carbon dioxide and, unlike solar panels and wind turbines, fusion energy can produce in any weather and, unlike fission, produces only trace radioactive byproducts.

From Concept to Reality, and Everything In-Between with OCTOPUZ