"There is no force on earth more powerful than an idea whose time has come."          VIctor Hugo 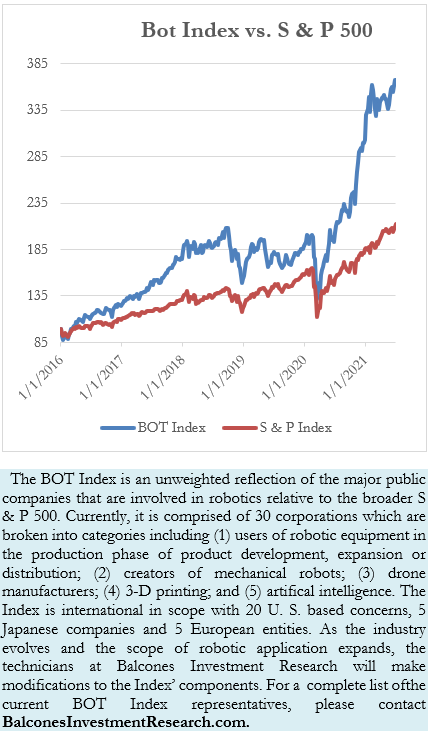 In the week preceding the Fourth of July holiday, the general market and, to a certain extent, the Bot Index continued to enrich shareholders. The S & P 500 rose 1.67% during the week while the bots climbed fifty-seven basis points. Holding back the bots was the precipitous decline by AeroVironment whose shareholders were disappointed by weaker than expected revenues. The stock fell over 12% following a revenue report of $394.9 million which was concerningly below the $400-$410 range that management had predicted in the spring. The shortfall was blamed on weakness in sales of its High Altitude Pseudo-Satellite System.

Both Accuray Inc. and 3D Systems gave back some of their recent gains, falling 4.75% and 8.11% respectively. The two were among the prior week’s highest achievers in their contribution to the Bot Index.

NIO Ltd. was the clear winner in the best of the best performer within the Bot Index. Shares rose 11.82% following record deliveries in June and the second quarter. NIO is also the beneficiary of Tesla’s problems in China and some recent crash incidents domestically. Incidentally, NIO announced it is ready to introduce its first luxury sedan early next year.

Other gainers of note included Apple (+5.14%) and NVIDIA Corp. (+7.65%). NVIDIA recently reported a strong earnings gain in May, with revenues reaching a record $5.66 billion, up 84% year over year. Also effecting the stock could be the four for one stock split that is scheduled for July 20 that will entice more individual ownership. 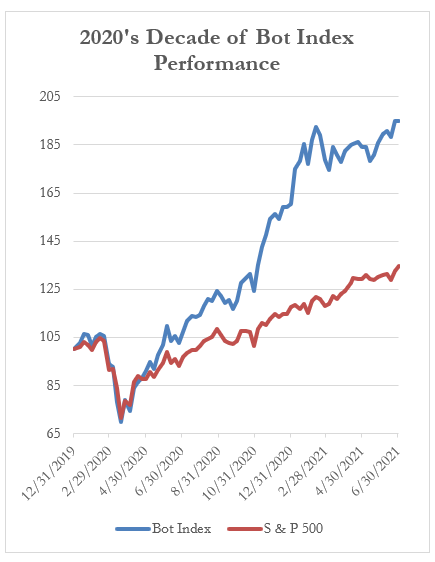 We have often opined on the importance of understanding the 2/3’s of the earth that is underwater. Outside of the fishery industry, petroleum drilling and some mining of manganese nodules initiated by JAMSTEC, the oceans have been relatively underexplored. However, in 2017 Seabed 2030 was initiated by Nippon Foundation-GEBCO. With only 6% of the global seabed mapped out at that time, the ambitious project seeks to have a complete chart of the seabed by 2030. According to the BBC, “If Seabed 2030 is to meet the end-of-decade target, it will have to leverage the emergence of robotic ships and boats.” Already a Dutch international company, Fugro, is building a fleet of Unscrewed Surface Vessels to assist in the underwater mapping project. A company spokesman noted that the current fleet of 26 ships will ultimately be replaced by autonomous vessels utilizing AI and drone technologies.