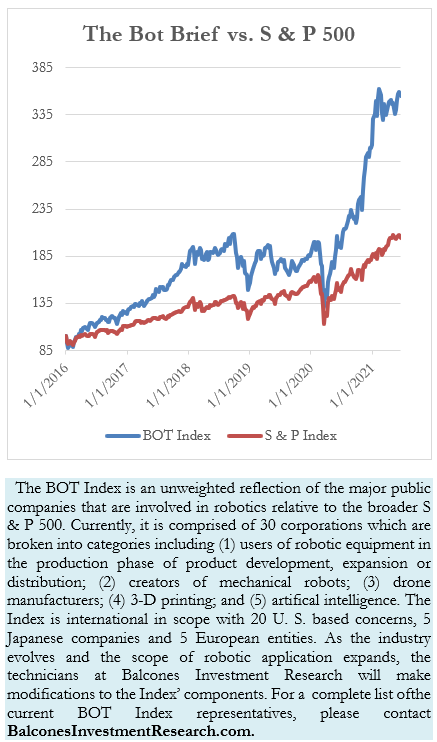 Despite having ten components that fell over 3% last week, the Bot Index actually slightly outperformed the S & P 500. In a generally weak market, the Bots fell 1.46% while the broader S & P 500 declined almost 2%. Helping to support the robotic issues were gains by NVIDIA Corp., Hiwin Technologies, and Amazon.

Closing at a price of $745.55 NVIDIA was bolstered by several Wall Street firms’ analytical comments. Bankamerica reaffirmed their buy recommendation and posted a potential target price of $800 to $900. Jefferies suggested the stock could rise to $854 (they were being quite specific!) While MarketWatch also assumed the $900 per share number. The driving force behind the sterling recommendations was the expectation that year-over-year earnings could rise 88.5% while revenues jump 63.3%. As an aside, the company hinted at injecting a $100 million investment in a British (Cambridge) supercomputer, helping to seal the deal of the ARM acquisition with regulators.

Amazon rose 4.18% in anticipation of its annual Prime Day of super savings. Jim Cramer’s comment, “Here’s Why Amazon is a Stock I Could See Buying” certainly didn’t hurt the stock either.

The lack of bellicose commentary or actions from mainland China regarding Taiwan allowed shares of Hiwin Technologies to rise 4.30%.

Other than just a general market malaise, there was no specific news that would account for the ten companies that slid over 3.25% for the week. Most of the weaker names were either retracements from prior strength (TXT, DDD, BRKS) or lower priced companies whose small dollar changes created larger percentage impacts (IMMR, OII, CYBQY). 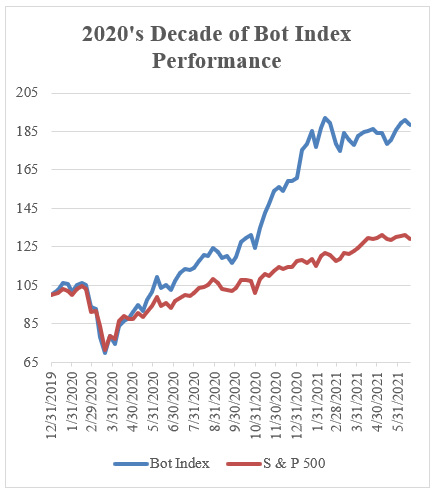 DARPA: Does A Renaissance Produce Anything?

Well, the answer is, most assuredly YES! In the June 5th edition of The Economist within its Science and Technology section, the publication expounded upon the success of the non-bureaucratic Defence Advanced Research Projects Agency (DARPA). In a glowing assessment of the unique ‘style’ of the Agency, The Economist noted the strength of Agency’s commitment to making risky ventures. Different from most R & D organizations, DARPA actually seeks to build things as opposed to writing hypothetical tomes. The complete freedom from burecratic oversight allows the entity to relish its failures as well as its outsized successes. For example, the Agency sponsored a fledgling drug company to utilize messenger RNA to combat viruses and other genetic diseases. Evenually, the Agency’s 2013 $25 million investment in Moderna proved critical in the fight against the Covid-19 pandemic. Also, to its credit were advances in weather satellites, GPS, drones, stealth technology, voice interface and the internet.

The Economist writers finished the piece with, “The lesson many have learnt from DARPA that mere difficulty is no reason to avoid something. It may even be a reason to do it.” Certainly, the Robotic Revolution will be a continued beneficiary of DARPA and the companies it supports.