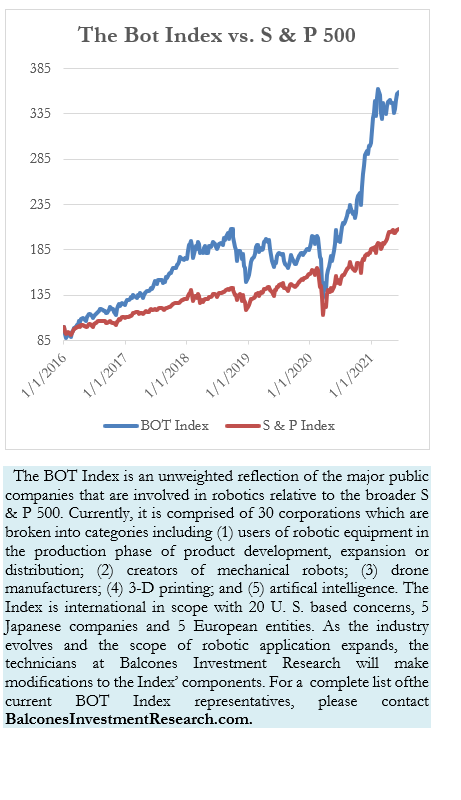 The BOT Index is an unweighted reflection of the major public companies that are involved in robotics relative to the broader S & P 500. Currently, it is comprised of 30 corporations which are broken into categories including (1) users of robotic equipment in the production phase of product development, expansion or distribution; (2) creators of mechanical robots; (3) drone manufacturers; (4) 3-D printing; and (5) artifical intelligence. The Index is international in scope with 20 U. S. based concerns, 5 Japanese companies and 5 European entities. As the industry evolves and the scope of robotic application expands, the technicians at Balcones Investment Research will make modifications to the Index’ components. For a  complete list ofthe current BOT Index representatives, please contact BalconesInvestmentResearch.com.

Both the Bot Index and the S & P 500 produced minute gains during the second week of June. The bots experienced a slight outperformance to the 42-basis point gain of the broad average, by posting a 68-basis point uptick. Similarly, to the prior week, about one third of the Index’s components were in negative territory, however, most retreats were minimal. In fact, there were only four companies that recorded gains in excess of 3% and three losers within that same periphery.

Of the gainers, the Chinese EV company NIO Ltd. was, by far, the outstanding performer for the week. Up nearly 9%, the company obtained a permit allowing it to start selling their cars in Europe. The first shipment is set for a September delivery to Norway. Previously, NIO was only a Chinese domestic company, but the new license effectively converts the firm into the international arena.

Despite political machinations against the ‘big tech’ companies last week, Amazon rose 4.39%. Market speculation that the company may enter the pharmaceutical distribution business, together with the company’s international expansion success, pushed the stock higher in a relatively flat market.

Intuitive Surgical rose nearly 4% as worldwide hospitals experienced increasing capacity due to the impact of the Covid vaccines. The impact has led the research firm Motley Fool to qualify the stock as their number one holding for the future. The firm categorized the stock as an ‘evergreen’ due to its long-term opportunity irrespective of the price.

Rockwell Automation jumped 3.09% as analysts cheered that the company delivered adjusted earnings of $2.41 per share in second-quarter fiscal 2021. The report exceeded Wall Street’s estimates of $2.15. Revenues of $1,776 million also surpassed the consensus mark of $1,703 million. Management’s guidance for the fiscal year was improved to a range of $8.95 to $9.35 from prior estimates of $8.70 to $9.10.

Oceaneering International was the weakest stock in the Index with a 4.58% decline during the week. Since the stock has more than doubled this year, some pullback was to be expected. 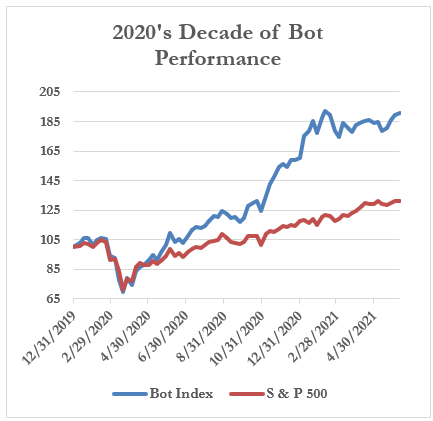 For the past few weeks, the Bot Brief commentary has centered on new forms of energy. Since automation and energy go hand and glove, it seems a relevant topic, particularly in light of the expansion in drones, electric vehicles, and mechanical robotic propulsion requirements. Two recent events drew our attention this week in this regard. The first came from our friend Marion Tupy’s Centers of Progress Series that highlighted a recent scientific breakthrough in the production of Lithium from seawater. The process employs an electrochemical cell containing a ceramic membrane made from lithium lanthanum titanium oxide allowing lithium ions to pass through from seawater. The lithium extraction process utilizes $5 of electricity to create 1 kilogram of battery capable lithium. The byproducts of hydrogen and chlorine offset the electrical costs, while the residual seawater is used in desalination plants to provide freshwater. Since lithium batteries are considered one of the most efficient transportable energy sources, this breakthrough could certainly pose another opportunity for robotic expansion.

The second news was the successful use of a Boeing drone to refuel a Navy F/A-18 Super Hornet fighter jet. The test involved the Boeing unmanned 51-foot drone supplying hundreds of pounds of jet fuel while traveling at an altitude of over 10,000 feet. The significance of the test will realign the strategies of carrier warfare and improve the efficiency of personnel and equipment usage.