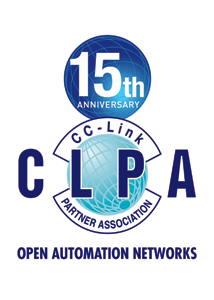 Chicago, IL USA - January is a significant milestone for the CC-Link Partner Association (CLPA) in the Americas, as it marks exactly 15 years since the founding of the organization and the birth of the family of CC-Link open automation network technologies. In these 15 years they have gone from dominating the Japanese market to becoming accepted global technologies.

The past 15 years have been momentous ones for the automation world in general. In particular, they have seen discrete wiring be superseded by fieldbuses, and then Ethernet become accepted as technology robust enough for the shop floor. The CLPA has been at the forefront of these developments all along. CC-Link fieldbus quickly established a leading position in the Japanese market and its world leading manufacturing base. From there, global expansion of end users within the automotive and other industries quickly spread it throughout Asia and beyond. In the process, the fieldbus technology matured and offered additional functionality such as a SIL 3 certified safety network.

The halfway mark saw the introduction of a world first – CC-Link IE, the only open gigabit industrial Ethernet for automation. Although Industry 4.0 was several years away, the CLPA was prescient in forecasting the ever increasing need for bandwidth in manufacturing and responding with a technology that still leads the market today. CC Link IE soon added additional capabilities too, such that today systems can combine I/O, safety, motion and energy management all on the same cable. Hence CC-Link IE is the perfect choice for the future’s bandwidth intensive applications where real time sharing of large amounts of data is essential and total cost of ownership a key concern. To further increase the adoption of CC-Link IE, the CLPA also introduced the Seamless Message Protocol (SLMP), a way for all kinds of devices to communicate on the network with a reduced development effort.

While its technology maintained an industry leading position, the CLPA itself also did not stand still as an organization. From its origins in Japan, it quickly became a global organization with offices across the world, able to support its users wherever they were. The membership of the organization also showed steady growth, to the point where the CLPA is now one of the largest organizations of its kind, with currently more than 2,400 partners time.

Automation vendors were also quick to embrace the CLPA technologies and a large catalog of products soon appeared. Today hundreds of companies offer over 1,400 products of all different types, ensuring maximum flexibility and freedom of choice for machine builders and end-users alike. This has led to CC-Link IE and CC-Link being able to boast a global installed base of close to 15 million devices in a range of multiple different industries.

The last few years have seen the CLPA use its key strength in Asia as a tool to assist partner companies throughout America to expand their business in this important and ever growing market. The Gateway to Asia (G2A) program was started in order to assist companies to develop and market CC-Link IE and CC-Link compatible devices throughout the Asian market when they join the CLPA and pass conformance testing.

Robert Miller, Director of CLPA Americas says: “The world has changed in many ways over the last 15 years, with technology often being the main driver”. Anniversaries are often a good time to reflect on what has been achieved and put it into a wider context. They are also valuable as they encourage us to look forward and plan for the medium and long term future.

“It is clear that open networks will continue to grow around the world and that the CLPA is strong and getting stronger. Industrial Ethernet clearly has a very dynamic future, and CC-Link IE is set to maintain its leadership position in that area”.

“Over the last few years, CC-Link IE and CC-Link have become more important for American companies; as evidenced by the steadily increasing number of companies becoming partners in the Americas, developing products and joining the G2A program”. Moreover, the addition of key American based automation vendors like Cisco and Molex to the board of CLPA also has been a very positive sign.

”Nobody knows what the future will bring. But with industry leading technologies like CC Link IE available, companies can know that they will be better equipped to deal with whatever challenges Industry 4.0 may bring their way.”

About The CC-Link Partner Association (CLPA)
The CC-Link Partner Association (CLPA) is an international organization with over 2,400 member companies worldwide. The partners’ common objective is promotion and technical development of the family of CC-Link open network technologies with the focus on helping their joint customers achieve their integrated manufacturing aspirations. Over 1,400 certified products are now available from hundreds of manufacturers. CC-Link is the leading open industrial automation network technology in Asia and is becoming increasingly popular in Europe and the Americas. The American headquarters is near Chicago, IL. The CLPA’s main initiative is the Gateway to Asia (G2A) program, which helps American businesses develop their Asian business further.

CC-Link IE's 1Gbit performance, ideal for capturing large volumes of data, as well as its flexible topology culminating in its SLMP protocol (Seamless Messaging Protocol) which allows it to span from CC-Link IE and CC-Link to SLMP enabled devices on standard Ethernet, have already been selected as fundamental/core technologies behind total automation initiatives such as Mitsubishi Electric's e-F@ctory; thus allowing customers to create the infrastructure required to meet the challenges of initiatives such as Industry 4.0, IIoT, China Manufacturing 2025 etc.

The CLPA organization is the driving force behind developing new open standards in industrial communication while also supporting the device development activities of its members as well as certification of those devices as a quality control and maintenance of the open networking environment. In addition the CLPA actively conducts promotional activities on behalf of its members to gain the wider acceptance and use of advanced CC-Link based networking technologies. The current board members of the CLPA are: 3M, Balluff, Cisco, Cognex, Idec, Mitsubishi Electric, Molex, NEC and Digital (Proface)